by John Floyd
July has been a busy month for me, in terms of the SleuthSayers blog--it has five weekends, so it was my duty to post three columns, on the 1st, 3rd, and 5th Saturdays. For this last assignment, I thought it might be fitting (and, yes, easy) to talk about four of my short mystery stories that appeared in publications with a July 2017 issue date. Three of them were in magazines, one in an anthology.

Hitched with the team

First, I was fortunate enough to be featured alongside three of my fellow SleuthSayers--R.T. Lawton, O'Neil De Noux, and Steve Liskow--and two of my old friends--Joe D'Agnese and Robert Mangeot--in the July/August 2017 issue of Alfred Hitchcock Mystery Magazine (which actually went on sale last month). My story there, called "Trail's End," is the first of a new series featuring rural sheriff Ray Douglas and his lawyer/mystery-writer friend Jennifer Parker. The two of them are in sort of an on-again-off-again relationship and, not surprisingly, wind up in the middle of a murder investigation on their way back from a trip to New Orleans.

NOTE 1: After finishing several drafts of this story, I was having a hard time coming up with a suitable title, so I changed the plot around a little, placed the murder scene at a motel, put it at the end of a road at the edge of a swamp in the middle of nowhere, and named the motel the Trail's End.

NOTE 2: Someone recently asked me why the women in my stories are usually smarter than the men. I replied that I try to write fiction that comes close to the way things are in real life.

One more thing about this story. An old friend from my hometown named Cheryl Grubbs told me a couple of years ago that she hoped I would one day use her as a character in one of my creations. As fate would have it, Sheriff Douglas's deputy in this story is named Cheryl Grubbs. And by the way, the second installment in the series has been purchased by AHMM and will appear sometime in the coming months, so Deputy Grubbs will be back again then. Cheryl, if you're reading this, I hope you'll like her.

My second July story, "The Rare Book Case," also came out in late June, but appeared in Woman's World's July 3 issue--WW copies go on sale almost two weeks before the issue date--and is an installment in my series about retired schoolteacher Angela Potts and her former student Sheriff Charles "Chunky" Jones. Most of the stories in that series were written for Woman's World, but other Angela/Chunky adventures have appeared in Amazon Shorts, Flash Bang Mysteries, Rocking Chairs and Afternoon Tales, and my short-story collection Fifty Mysteries: The Angela Files.

This one is set on the Fourth of July, and involves the theft of a rare first-edition novel from a locked case at Abner Smith's bookstore. The thief, long gone now, was seen by one of the store's customers but not by the owner, and when the sheriff is summoned certain things in the customer's description of the suspect don't seem to add up. Fortunately the bossy Ms. Potts--who as usual is on the scene even though she probably shouldn't be--is especially good at that kind of math, and saves the (Independence) day.

My third story of the month, in the Summer 2017 issue of B.J. Bourg's Flash Bang Mysteries, is a new episode in a series I've been writing for a long time, featuring Sheriff Lucy Valentine and her mother Frances. Fran usually helps her daughter solve mysteries (whether Lucy wants her to or not), but her main goal is to get Sheriff Valentine married so Fran can become a grandmother, a mission that has so far been unsuccessful. Other stories about these two, which I've named the "Law & Daughter" series, have appeared in Sherlock Holmes Mystery Magazine, Mysterical-E, Woman's World, Futures, Mouth Full of Bullets, Seeds, Kings River Life, my short-story collection Dreamland, and several anthologies.

This story in Flash Bang is called "Ace in the Hole," and involves the gangland kidnapping of a guy named Ace McGee, who seems to be destined for a late-night burial in a pit at a construction site. Working with Fran and Lucy to try to keep Ace alive and above ground is teenaged genius Donna Fairley, which is also the maiden name of one of my old IBM co-workers. (Warning to my family, friends, and acquaintances: you guys have a way of showing up as characters in my stories, so you better be nice to me . . .)

A neo kind of noir

The last of my July-dated publications, "The Sandman," is a standalone story included in the anthology Noir at the Salad Bar, from Level Best Books. (Actually this isn't the last one, but until just before time for this column to post, I thought it was. My fifth publication with a current date, a story called "Crow Mountain" in Strand Magazine, is described below. Hang on . . .)

"The Sandman" is possibly the most intense of the stories I'm discussing here, but I still tried to plug a bit of humor in. The title refers to a character named Sanderford, and the plot involves a couple of underworld loan-sharks who target the owner of a local bar. This mystery is more of a howdunit than a whodunit, with a few twists thrown in (I can't seem to resist that), and was great fun to write.

I'm especially honored to have been featured in this book alongside friends Michael Bracken and Alan Orloff. Noir at the Salad Bar was released on July 18.

Getting lucky at WW

I also have another Woman's World story, called "Mr. Unlucky" out right now, but its issue date is August 7 so I'm not counting it as one of my July stories. (That issue appeared at our Kroger store on July 27, so I picked it up yesterday along with a jug of milk and a loaf of bread. Seriously.) This was my 89th story to be published in Woman's World, and in recent weeks I've sold them #90 and #91. So far, 82 of those have been installments in my Angela-and-the-Sheriff series.

"Mr. Unlucky" is a whodunit about a robbery at a local furniture store, and involves a mysterious note on which is written the name of an old TV show and movie called Mr. Lucky. I'm a certified, card-carrying movie addict, so anytime I can work something cinematic into one of my stories, it makes it even more fun to write. Upcoming is a Labor Day story scheduled for the September 4 WW issue (on sale August 24) and a murder mystery in the September 18 issue.

I only just found out that I also have a story in the current (June-Sep 2017) issue of Strand Magazine, just released. Yes, as I said, I know that makes five stories rather than four, but instead of changing the title of this post at the last minute, I figured I'd tack this onto the end. The story is "Crow Mountain," about a fisherman who encounters an escaped convict deep in the woods, and what happens as a result. If you pick up this issue, I hope you'll like the tale--it's a little different. And I'm proud to have been featured alongside one of my longtime heroes, Max Allan Collins. 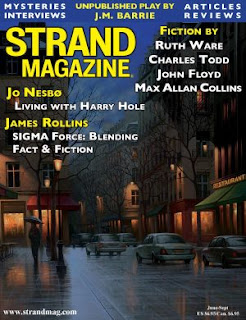 Anyhow, that's my midsummer report. (You might notice I didn't mention my rejections, which are many.) If any of you have recent--or not-so-recent--successes to announce (publications, acceptances, completions, etc., of either shorts or novels), please let me know via the comments section below. Everybody likes hearing that kind of news.

Speaking of fortunate events, today is our wedding anniversary. Carolyn and I were married 45 years ago in a galaxy far, far away (Oklahoma), and tonight most of our kids and grandchildren will be here at our house for dinner. I can't think of a better way to celebrate.

Familywise AND writingwise, I wish all of you the best.
Posted by John Floyd at 00:01