The Paths of Glory...

Now, this may sound strange to you, but one thing I would like to see is happen is the United States reinstate the draft. Personally, I believe EVERYONE should have to serve in the military, men and women alike.  My reasons are many:

(1) When only 1% of the citizenry serve in the military, and all are "volunteer", then the citizenry as a whole seems to be remarkably unconcerned about what wars, "unofficial" wars, etc., we're in.  The Middle East conflicts have seen military personnel - often "part-time" National Guard - serving 3, 4, 5+  tours of duty, and nobody seems to care.  It's someone else's child, someone else's family, and they volunteered.  Let them go where they're told.  Especially since it's somewhere "over there".  I find this unhealthy.

(2) If everyone serves in the military, then maybe certain politicians won't talk patriotism out of one side of their mouth and then yank promised veterans' benefits away with both hands.  And other things...

(3)  If we're going to police the world, then by God I think we should draft everyone, and let everyone in on what it's like to serve.  Training, education, and a greater knowledge of the world around them.  Mark Twain:  “Travel is fatal to prejudice, bigotry, and narrow-mindedness, and many of our people need it sorely on these accounts. Broad, wholesome, charitable views of men and things cannot be acquired by vegetating in one little corner of the earth all one's lifetime.”

(4) Recurring statements from recurring politicians (who do not/ have not/ will not ever serve) that seem to openly want / long for/ plan for war.  Again, going back to #1 - we have to stop taking our military for granted.  We have to recognize that it's real blood that is shed, real lives that are lost, real minds / bodies that are damaged, sometimes irreparably.

(5) The other side of it is that we appear to be developing a certain (small?) percentage of the military that seems to be increasing in disdain, distrust, and dislike for the non-military majority. I've been told that American civilians in general are unfit, immoral, and slothful.  (From the Walrus and the Carpenter: "I deeply sympathize." Sometimes.) As one said to a judge once, "We throw these people over the fence."  The judge replied, "Welcome to the other side of the fence." And this important:  the military is there to defend the BOTH SIDES OF THE FENCE.

I do believe that we take war too casually in this country, mainly because (post 1812) our wars have always (with the exception of the Civil War, Pearl Harbor, and 9/11) been on someone else's soil.  (This includes the "American Indian Wars" which were all fought on what was, at the time, Native American land.)  There is an American tendency to downplay European distaste for war, European steady pursuit for diplomacy, as "liberal", if not downright cowardly. During the buildup to the Iraqi invasion, Richard Perle stated that European nations "do not have the most courageous of instincts," implying that America must intervene in inter-national affairs because Europeans are afraid to.  (Citation on NBC)  Back in December of 2005, Bill O'Reilly said "I understand Europe. They're cowards." He went on to add,
"...by and large, the European population is soft and afraid. ... They won't confront evil on any level. It is anything goes, just leave me alone. Give me my check from the government and leave me alone." (Citation on MMFA)  It's a fairly constant theme on Breitbart as they quote Neil Farage, Geert Wilders, and others among the alt-right.

But as one response put it, "Europeans are not cowards - It's that we know war."  And they do.  The following is a list of European wars over the last 200 years: 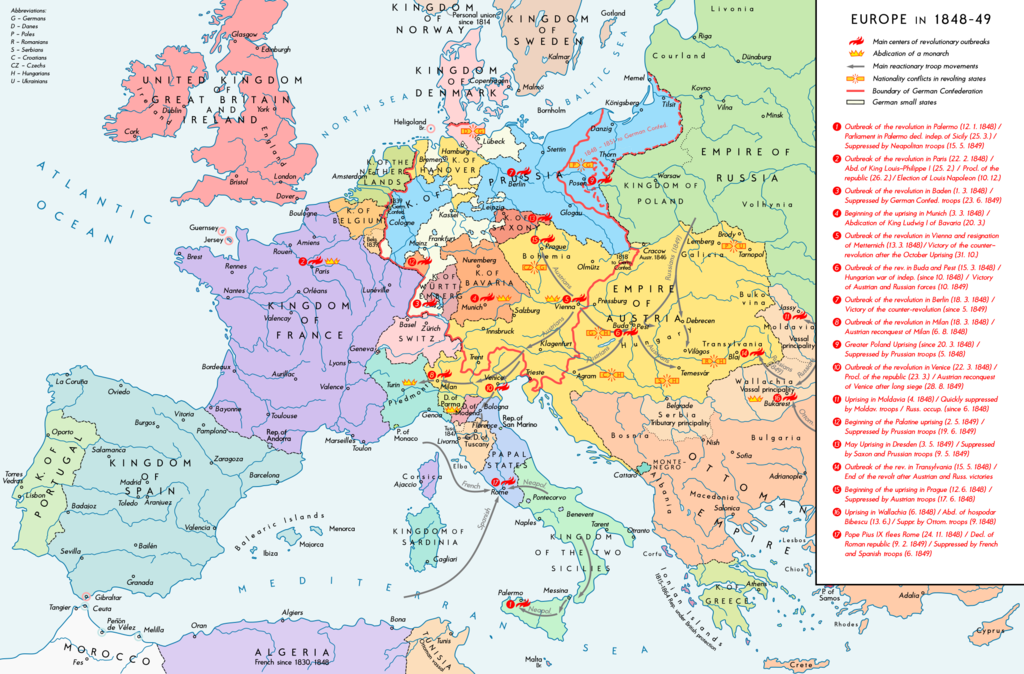 There are reasons to pursue diplomacy when you have seen war on your home soil at least every decade for over 150 years.  There are reasons to want peace and unification when entire generations of young men have been wiped out time and again (see the list above). When cities have been bombed to rubble, and refugees have numbered in the tens of millions (WW2).  There are reasons to try to figure out what acceptable risks are when you have seen an entire continent explode, and 38 million people killed (civilian and military), over the shooting of one man in Sarajevo (WW1).  And to pursue civil accord, liberties, and responsibility when you've seen an entire continent almost drown in darkness, and almost get destroyed by war, after racist fanatics took over a government and then decided it was time to take over the earth (WW2).

And wars don't just end with everyone going home to a wonderful family reunion.  The scars last a long, long, long time. (Trust me on this: I lived in the South for years, and my mother was Southern.  The Civil War has not yet been forgotten and forgiven, on either side, and that was over 150 years ago. And don't even get me going on the Greeks and the Turks:  my grandfather was still furious at the Turkish invasion of Constantinople... Which happened in 1453...)

WW2 left 20 million military dead and 40 million civilian dead, and God only knows how many wounded.  There were also 60 million refugees.  Of those refugees, at least a million still hadn't found homes by 1951. And millions more weren't refugees, but were simply homeless, as whole cities were bombed into rubble, and much of the European industrial infrastructure destroyed.  And this brings up another unpleasant truth:

World War 2 is the reason why the United States became the leader of the free world and sailed into the 1950s on the biggest wave of prosperity we ever saw:  we hadn't been bombed into rubble, we hadn't lost our infrastructure, we didn't have a huge refugee population to resettle.  Our factories were at top production, when there were barely any left running anywhere else on the planet.  For years, we were the sole supplier of almost everything, and we grew very very rich.  That specific kind of economic boom will never happen again, no matter what any politician tells you, and thank God for it:   it was based on the absolute misery of most of the rest of the world.

Sadly, these lessons may have to be relearned, especially if certain parties in Europe and elsewhere have their way.  But maybe they will continue to remember, even if we do not.  They know how bad it can get.  We can only imagine.  Thank God. May it always stay that way.