The Good and Bad of Societal Family Expectations

Family Fortnight +  Leading up to the  International Day of Families on the 15th of May, we bring you the fourth in a series about mystery writers’ take on families. Settle back and enjoy!

Those five words from an old friend's husband set my teeth on edge more than a decade ago, when I was in my early thirties. They still bother me. Not because they make me feel like a bit of a failure in such an important aspect of life (as they did then), but because they represent what still seems to be a ridiculous societal expectation. You grow up, you get married. And if you don't, you're incomplete; there must be something wrong with you.

Indeed, my own mother had this perspective. To her dying day, she believed I was unhappy. I had to be, she reasoned, because I wasn't married. Nothing I said or did to show I was happy by myself made any difference. To her, a woman couldn't be happy if she doesn't have a husband. 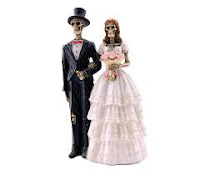 Well, on behalf of all my single friends, I say poppycock. (If you know me at all, you know I actually used an expletive instead of poppycock. But I wrote poppycock because this is a family blog. (Did you see what I did there?))

In fact, I'll wager that not having a husband has been good for me, at least creatively. Imagine how much less writing I would get done if I had a husband and children to care for and spend time with. I can barely manage giving my dog enough attention.

Of course, it's possible that having a husband and children would inspire more stories. Thinking back to old boyfriends, there was the one who liked to interrupt me; the one who spent money like he made it in the basement; the one who liked to blame the victim. Yes, being stuck in close quarters with any of them could have inspired a lot of murder mysteries. Or at least murders. Sure, then I'd go to prison, but think of all the writing time I'd have.

Not that I need a husband to come up with murder stories. I have parents, two brothers, and a sister, so I've got more than enough history to delve for creative inspiration. Indeed I've written a large number of stories involving killing or maiming members of your family. My sister has accused me  several times of creating sister characters with her in mind and has said that she doesn't want to get on my bad side. (Too late! Kidding! Maybe.)

And family can also have a broad definition. I'm sure many people have friends they aren't related to but whom they think of as family. And when you care about someone so much, they can end up inspiring ire (either because of something they did or something done to them). Indeed in my newest short story, "Whose Wine Is It Anyway?," from the anthology 50 Shades of Cabernet, my main character, Myra, thinks of her boss of forty years, Douglas, as her little brother. And when pushed, she decides that it's time she teaches her little brother a lesson in humility. It's the family thing to do, to help make him a better person.

So, am I married yet? Nope. But that doesn't matter. I have more than enough friends and family to inspire my writing. Maybe I'll go kill off another one today. On paper, of course.
Posted by Barb Goffman at 00:00