You Don't Want to Cross Me

If the cops ever come banging on my door, I'll know it likely has something to do with a little file I have on my computer. The title: People to Kill.

Sounds bad, doesn't it? Your average Joe might be nodding big time. But my author friends? Nah. They get it. They all probably have lists themselves, though they might not be dumb enough to label theirs People to Kill and leave it right there on their desktop where anyone can spot it.

So who are all these people with a target on their back? One's a teacher a friend had in high school. The guy made my pal's life a living hell, so I told her I'd take care of him for her. Another person on the list is a doctor who made a different friend suffer. So I said I'd off the doc. A third person on the list ... Well, you get the idea. I've got a lot of disgruntled friends. 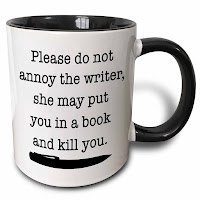 You'll notice I didn't mention anyone on the list who had crossed me. That's because I don't need to write their names down. They are burned in my brain, and one day, they each will get what's coming.

I know you're waiting for it, so yeah, yeah. On paper. I'm going to get revenge on paper. I'll name a character who's going to suffer after someone's real-life nemesis. Not the full name, of course. The first name or the last name. Enough for me and my friends to know what happened.

I've found I enjoy bringing pain to folks who've been mean--or worse--to people I like. It's cathartic. It's especially soothing when I'm dealing with people who've hurt me. Shall we count the ways?

Want to read "Stepmonster"? It's on my website--one of my two stories published in 2016. To read it, click here. Or if you want to read a bunch of mystery/crime stories involving bad weather (rain storms, snow storms, sand storms), you could pick up the anthology it's in, Chesapeake Crimes: Storm Warning.

Author friends, have you dealt with real-life foes in your stories? I'd love to hear the details in the comments below. And readers, is there someone you'd like added to my People to Kill file? Please share your story. But don't list your nemesis' name. You can send that to me privately.