A simple sculpture of a small, Asian woman is causing a big uproar.

I’m not a believer that blame and shame should be a life sentence, nor that the sins of the fathers must be visited upon anyone else. On a global level, I commend governments that have apologized for war crimes or, in the case of our own country, wrongful imprisonment of our own citizens because of ethnicity.

While humans are capable of horrid barbarity, they’re also capable of great forgiveness. Even so, atrocity denial is making a resurgence.

Asia had its own version of the holocaust. Leading up to and throughout the second Sino-Japanese War and World War II, the Japanese Army institutionalized slavery of men and women. The scale was so huge, it’s easy to be blinded by the sheer volume of statistics. But the sexual enslavement of perhaps 200 000 young women from Korea, Philippines, and China bring matters into a more personal focus. The term ‘comfort women’ became a euphemism for what Japan considered captives turned into state-owned prostitutes.

Japanese are good at many things, but national responsibility is a tough hurdle for them. Deniers argue
The few comfort women still living are affectionately called ‘grandmothers’ in both Korea and the Philippines, and are highly regarded. In the 1990s, South Korean and Japanese governments agreed to let bygones be bygones. A former prime minister apologized and Japan even paid compensation, but the attitude of Japan’s mass denial offends Koreans, Filipinos, and the Chinese as well. 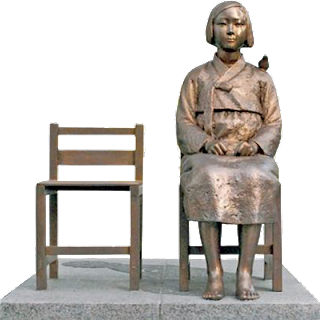 Ordinary citizens groups did something about it. Activists placed a statue memorializing the comfort women in front of the Japanese consulate in Busan, mirroring similar sculptures in forty other South Korean cities including Seoul. Japan withdrew its ambassador in protest.

The sculptures have appeared in other parts of the world including the US. The first here was erected in Palisades Park, New Jersey, and the second in San Francisco, Osaka’s sister city. Japanese denial organizations unsuccessfully sued to prevent one going up in Glendale, California and at present, a Change.org petition is circulating to remove the one in San Francisco. It insists there’s no documentation or evidence of forced sexual slavery.

Deniers had more success in Australia. A Sydney suburb banned a park statue, but a Uniting Church of Australia volunteered to host the comfort woman memorial.

Apparently Japan has never heard of the Streisand Effect, the phenomenon where attempts to hide or censor information result in further widening distribution of that information. And now you know.

Nobody hates the Japanese– I’m pretty sure South Korea doesn’t– but glossing over a wartime atrocity rankles the public. If I might be so bold as to advise Japan, even if you can’t admit it, stop denying it. Then some day the misdeeds might become a sad footnote in history.

What is your take?
Posted by Leigh Lundin at 00:00