by Art Taylor
I don't believe that any of us make ourselves anew each January 1, but I do believe very strongly that the turn of the new year can offer opportunities for for reflection, for taking stock, and for articulating some intentions and ambitions for the immediate future. Vague resolutions like "Eat better" or "Lose weight" or "Be more patient" are, in my opinion, largely doomed to failure. Better are those that set not just goals but also the path toward reaching those goals: "Instead of a cookie for an afternoon snack, I'll eat more fruit instead," for example... and then you buy fruit, you keep fruit instead of cookies at your desk—in fact, you throw your cookies away. Resolutions that involve cultivating new habits are, it's been proven, the most successful—and it takes a month or more of building those habits for them to stick. "Read War and Peace" never worked for me, until I changed it to "Read War and Peace one chapter a day"—and as I've written about before, that ultimately seemed an integral part of my day for a while.
Among my own new year's resolutions this year are plans to build a more positive attitude, for example—something my wife and I are embarking on together. (This was prompted, I should explain, by a recent weekend trip to New York where our son got sick; recounting the story to friends afterward, that sickness became the focal point of an ill-fated weekend—until we realized we could tell the same story a different way, shifting focus to all the fun things we did, and suddenly the weekend looked like a terrific adventure, despite some small stumbles.) For our resolution, we bought a small journal, and each evening our goal has been to write down at least one thing that stood out as positive about the day. Truth is, a couple of times already we've forgotten and then played catch-up the following morning. But with persistence, I think that this small record will become such a regular part of our day that we'll do it by routine—and, with luck, some more positive attitudes will grow out of that routine.

Another of my resolutions is always about writing—some articulation about writing projects for the year, some implementation of a plan to accomplish those goals...even as I recognize that some of those plans may at times go off the rails.

Coming off a tough year and a busy semester, I found myself at wit's end about my writing: a novel that had lost traction, four stories in various ragged degrees of being unfinished, the sense that all of them needed attention, and no idea about which draft to tackle first—which meant working on none of them. Clearly, a shift in perspective was needed, and a shift in perspective is what we've taken.

Hand in hand with a resolution to give fresh priority to our writing, my wife Tara and I jumped on the opportunity to start the year off with a week's worth of immersion in the writing life. As I finish this post, my wife and I are taking part in the writer-in-residence program at the Weymouth Center for the Arts and Humanities in Southern Pines, NC—a program that promises some much-appreciated time and space both to indulge our imaginations and to focus intently on our craft, freedom and diligence in equal measure.

The timing of this was good—both because I'm still on winter break from my teaching at George Mason University and because the start of January helps us to get the new writing year off on the right foot. This is the first writing retreat/residency I've ever done, so I have little to compare it to, but the experience has proven a positive one, in great part thanks to the kindness of our host, Katrina Denza, of the Weymouth board. The Weymouth Center's home is the Boyd House, a beautiful mansion built by James and Katherine Boyd, the former a writer of historical novels best known for  Drums, set in the Revolutionary War and illustrated by N.C. Wyeth. Writers in residence at Weymouth stay in one of several rooms named for the Boyds' friends and frequent visitors to the home; I'm staying, for example, in the Sherwood Anderson room—which I adore, of course, given my commitment to short fiction and my admiration for the novel in stories, and it's inspiring to know that Anderson himself was one of the most frequent visitors to the mansion in the late 1930s. Other rooms are named for Thomas Wolfe, Maxwell Perkins, and Paul Green—the latter the room that Tara chose—and each room has a bed and a desk, inevitably echoing that famous saying of Virginia Woolf's about the need for a writer to have a room of one's own. 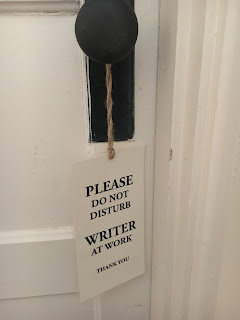 With only small breaks over the last few days (more on that below), I've worked at this desk from the moment I rolled out of the bed three feet away until close to dinner time. While my schedule at home (at least here on winter break from school) might seem to offer some of the same flexibility, there are significant differences. If I were in my office at school, I would likely feel the need to devote part of the day to prepping syllabi for the next semester  or to answering the emails that are inevitably coming in despite my away message; but I'm putting off that syllabi prep for now and I'm very much treating that away message seriously (sorry to say for anyone who's reached out). If I were trying to work at home, there would inevitably be things to do around the house—all of which are too far away right now even if I was suddenly looking for a distraction (as I know we writers are prone to look for).  And on the flipside of those negatives (can't do this, won't do this), there's also the pervasive sense of what I am here to do and I need to take it seriously. And lest we forget that purpose, there are reminders hanging on every door—signs which both Tara and I are already wishing we could take home.

Has it worked? I printed up drafts of those four stories I mentioned above, and the first half of the week I did major revisions on two of them—refocusing some of the thematic threads of one story and then reshaping and finishing up some extensive line edits on another, to the point of trimming away nearly a quarter of that story, streamlining it considerably. And around all that writing and revising, I've been reading steadily—works that I hope helped to engage and inspire.

The next few days? Well, as I write this, a winter storm is bearing down on the area, and it will be after this post is public that we make the decision whether to ride out the storm or head home before it arrives.

In the meantime, a word about those small breaks I mentioned above. Downtown Southern Pines, within walking distance, is a great haven of fine restaurants and shops as well as home to a beautiful bookstore, The Country Bookshop; we've gone down there at least once each day during our stay for a quick bit of exercise or bite to eat or to browse some books—and pleased to see my own book on the shelf there too! And mid-day on Thursday, we popped up to Raleigh for lunch with my parents and our son (they've been taking care of him this week—thanks so much, Mom and Dad!) and to visit the new location for another of my favorite bookstores, Quail Ridge Books. (And yes, looked for and found my book there too. Took pictures in each case as well, as you'll see below.)


Needless to say, this too helps keep the momentum going—seeing where the hard work might end up one of these days.

Circling back to where I started this post: I'm not certain how well that overall momentum might continue—even through the rest of the week, given the uncertain weather, much less back in the real world of laundry and dirty dishes, lesson prep, daily grading, and the daily grind. But, keeping a positive outlook (that other resolution!), I'm feeling encouraged by the work I've done, and making headway on a couple of those stories so far has helped clear my head for work on the others and on my longer project.

And here's sending out good wishes to all the writers reading this! May 2017 treat all of us well.