by John Floyd
NOTE: It is my honor today to welcome my friend Herschel Cozine as a guest blogger. Herschel has published extensively in the children's field, and his stories and poems have appeared in many of the national children's magazines. His work has also appeared in Alfred Hitchcock's and Ellery Queen's Mystery Magazines, Wolfmont Press Toys for Tots anthologies, Woman's World, Orchard Press Mysteries, Mouth Full of Bullets, Great Mystery and Suspense, Mysterical-E, and many other publications. His story "A Private Hanging" was a finalist for the Derringer Award, and his flash story "The Phone Call" appeared in Flash Bang Mysteries' summer 2016 issue. He currently has a mini-mystery in Over My Dead Body, and a story scheduled in OMDB's next issue as well. Herschel, it's great to have you here (again)! — John Floyd 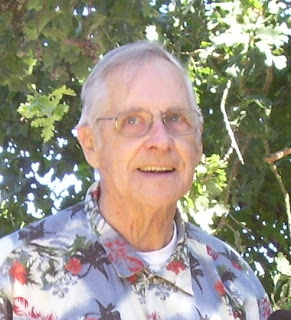 I would like to concentrate today on the English language. I'm not talking about its idiosyncrasies that  allow one to use "ghoti," according to GBS, to spell "fish." Rather I am more interested in the variances between the British and U.S. in the spelling and meaning of words.

I am fully aware that the British were here first, so to speak, and that it is their language that we have borrowed and, supposedly, corrupted. But because one is the first to use an item doesn't necessarily mean he is using it correctly.

The British, for example, have the philosophy that two letters are better than one in the spelling of a word. "Why use one when two will do the same job?" It sounds like our government's approach. A brief list to demonstrate my point:

I won't even try to spell "maneuver" the way they do.

It seems to me a waste of space and ink. Walt Disney drew his characters with three fingers instead of the usual four. "Think of the money I save on ink," he said.

But Disney wasn't dealing with the British. They're awash in ink; most of it red as I understand it.

Recently I contracted with a magazine in Canada to write a story, and was told by the editor to use the British spelling of words. Fortunately for me there were only two. I'm not good with this kind of thing.

Then, of course, there is the meaning of words. In this instance I see no advantage of one over the other. Here are a few:

Then there is the ubiquitous "bloody," which encompasses most of the four-letter words we Americans use. In this case the British have economized. Would that we followed their example in this instance.

Of course, the British refer to a two-week period of time as a fortnight. I have no idea why. When I was in the army, stationed at a fort, a day seemed like two weeks. Is there a connection here?

One need not travel to the United Kingdom to see and hear differences. In this country we speak several different languages, depending on which part of the country we are in. My father, who was born and raised in Brooklyn, changed the "erl," liked "berled" potatoes, and lived on "Thoid" Street. When I lived in New England, the residents drove "cahs," went to "grammah" school, and ate "botatoes." Since they dropped the "R's" from words, they found themselves with a surplus, so they put them on the end of other words. "Idears" and "diplomers," for example. Southerners eat "ahs" cream. Texans? I am still grappling with that one.

Here in California, we don't even speak English. Recently I was in a coffee shop. The table next to me was occupied by some young folks. One young lady with purple hair and tattoos on her arms and eyelids was holding court. I couldn't understand a word she said. I attributed that to the ring in her nose, which kept her from enunciating. But the others at the table had no problem with it. Truly remarkable.

But I digress. In the past few years a whole new language has come into existence with the emergence of texting. I wonder if the British text. How could they possibly communicate using a single letter? LOL.

I wonder, too, if this form will ever influence our writing. Just as English in Chaucer's time is far different from today's, will future generations see a similar change? Hamlet will soliloquize thusly: "2BR not 2B." I will, gratefully, not be around to see it.