Amazon isn’t known for outstanding television productions, but they found a winner in Goliath, a legal drama set in Southern California. Catch it if you haven’t seen it. I binge-watched all eight episodes in a 20-hour period, a unique experience for me.

As soon as episodes ended, I pondered them as a writer looking for lessons. With luck, I’d like to see a season 2 (and 3 and possibly 4) with all of the characters returning. (You too, Brittany.) 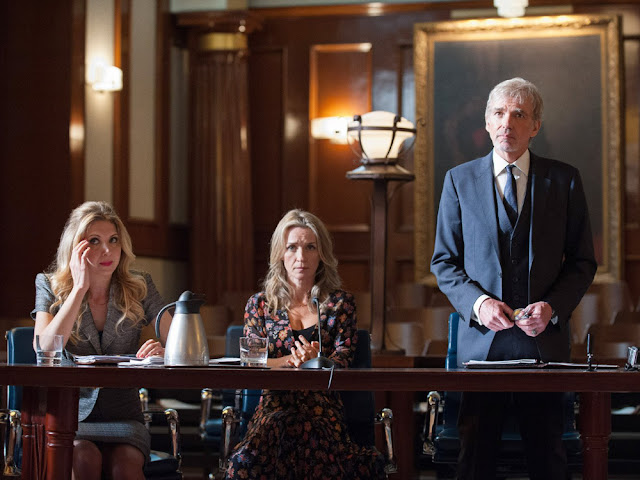 Trite and True, a Word about Clichés

At first glance, the clichés almost overwhelmed me. I had just surfaced from critiquing a sci-fi rebels-versus-the-Federation story. I told that author,


“It’s packed with clichés,” I said. “Federation is Star Trek and the rebels smack of Star Wars.” I pointed out examples.

“They’re not…” I fumbled for a sensitive way to say not original, thinking it read too much like fan-fict. “They’re derivative.”

“Of course. That’s the point. You mention a meme like ‘the Federation’, and everyone understands what it means.”

Meanwhile, back to our story…

Thus I entered the series with a mindset still grumbling about means and clichés, and initially Goliath appears loaded with them: 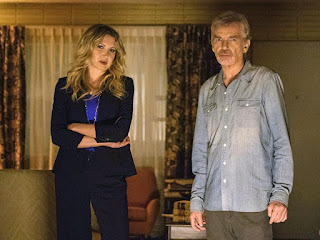 Nonetheless, the plot and the characters, clichés or not, won me over. Frankly, the entire cast turned in star performances, which is quite a compliment. I especially like the women… all made it seem like they were born to their rôles.

Although I listed the twitchy, temperamental engineer in my gripes above, my complaint is more a matter of degree. I worked with engineers and highly technical people in depositions, and their obsession with precision nearly derailed their testimony. The nervous Ned may be a bit cartoonish, but his portrayal is not that far off. Cheers for his girlfriend too.

Whereas a number of recent shows tack on lesbian encounters for shock or titillation value, it actually works in Goliath. The affair advances both plot and the development of multiple characters.

Goliath more resembles an ellipse with two strong foci, the protagonist Billy McBride and the antagonist Donald Cooperman. There are no minor characters: all participants are important and well executed.

One of the best villains is Callie Senate. The actress must have had a ball playing the devious, back-stabbing lead lawyer. Those of us who’ve worked in offices recognize her. Yet the character does something in her private life so reprehensible that it makes the vicious office politics look like charm school. She’s so effectively cast that to males, she exudes a treacherous sexual attraction. Guys pick up deadly warning signals, but some fools can’t resist trying to mate while hoping to keep their heads.

Another smart character is Lucy Kittridge, a brilliant and ambitious junior lawyer who wants to move upstairs in the firm. One reviewer waxed sorry for her, portraying Lucy as a victim who, when she fell in love, suffered from Stockholm Syndrome. I didn’t see it that way at all. Yes, there is a shocking example of sexual predation, but Lucy was no fainting-couch filly. While appearing shy and introverted, she showed every interest in meeting the great man himself, knowing what she was getting into. More than once, she revealed her teeth and claws, using a disability as a weapon. She took delight when she seized opportunities to lord it over others. The sad part came when she appeared spurned, but even then she seemed to read the signals differently… correctly.

The show opens with an impressive night-fishing accident before introducing us to the main characters. As good as that was, nothing compares to the stunning ending of episode 2, the best of season 1.

Unfortunately, drama trailed off in the third quarter of the series and never fully recovered. That surprised me because I felt a number of threads could have provided considerable tension and thrills.

For example, a very menacing bad guy stalked McBride, his witnesses, and his legal team, killing key figures. Yet as effective as Karl Stoltz was, the writers wrote him out of the script not with a bang, but a whimper. His demise left a question unanswered… indeed, unasked… who murdered him?

Likewise, crooked Police Officer Ezekiel Sanders delivered a follow-up beating that also went unanswered. That assault may have set in motion a betrayal of McBride.

Finally, the courtroom drama tapered to a trickle. The story asked us to believe the law firm tail wagged the corporate dog. Viewers are used to courtroom shortcuts, i.e, objections that go unanswered, but in the final hours, the legal writers could have taken suspense lessons from Perry Mason.

The main issue for me, the plaintiffs didn’t present sufficient convincing evidence. Of course McBride attempted to show the corporate defense staff and the judge unfairly kept matters from the jury, but if I were a juror without access to the backstory, could I have been persuaded?

The most satisfying moment of the dénouement wasn’t the verdict nor the post-trial negotiation. That moment came when McBride asked for help with his cell phone. You had to be there.

And I liked the end… just the sound of surf.

Have you seen it? What do you think?
Posted by Leigh Lundin at 00:00