Writing What I Knew


by John Floyd
How many times have we, as writers, heard that we should "write what we know"? I'm not sure I always agree with that piece of advice--I'd rather it be "write what you feel comfortable writing," or "write the kind of things you like to read." What you know--or at least what I know--isn't always interesting enough to carry a story. Besides, if Asimov, Bradbury, Verne, Heinlein, Serling, etc., had written only what they knew . . . well, you've heard that argument before.

But in the case I'm about to describe, I chose to heed the advice. 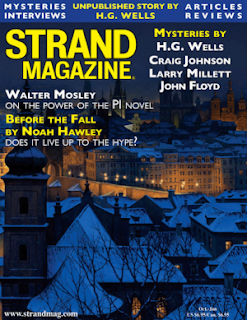 A couple of weeks ago I picked up a copy of the current issue (Oct.-Jan.) of Strand Magazine, which contains one of my stories, called "Jackpot Mode." It's one of those tales that was fun to write, partly because--for a change--I covered a subject that was extremely familiar to me, once upon a time.

A bit of boring background, here. I hired on with IBM right out of college, back when the pharaoh was building the pyramids, and stayed with the company for thirty years. (That time-span included a four-year leave-of-absence to the Air Force.) I worked as both a marketing rep and a systems engineer, and for most of my career I was what was then called a "Finance Industry Specialist," which means I spent a lot of time in banks, from Atlanta to Anchorage, Boston to Burbank, Minneapolis to Manila. My specialty area was the software for IBM teller stations, check-processing systems, and ATMs.

Which brings us to my Strand story. Financial institutions have always been prime fodder for crime writers, and for the past forty years bank robbers seem to have had an unusual fondness for automated teller machines. There must be something especially tempting about the fact that so many thousands of dollars are sitting right there in a box near the sidewalk--never mind the fact that it's encased in half a ton of steel. Even in this day and age, stories of dimwitted, would-be thieves trying to blow up, drill through, or drag away ATMs are regularly featured on the evening news. These attempts, as I'm sure you know, almost always fail. So I figured, why not write a story about a couple of inside guys--a bank programmer and an equipment repairman--who team up and try to do it the right way?

I should mention at this point that not everything I put into this story works exactly the way I said it does--after all, I don't want somebody using information in my fictional frolics to actually steal a small (or large) fortune. But most of it is technically correct. In the olden days ATMs would occasionally suffer electronic or mechanical indigestion and spew cash like oversized slot machines until the error was found and corrected. We had a term for this thankfully rare occurrence: it was called "jackpot mode." (I saw it happen only twice, during routine off-line testing.) It also served as what I thought was a good story title.

Like several of my recent mysteries for the Strand and other magazines, this one ran a little long, around 8000 words. But there was a lot of detail involved as well as a lot of money, and I can never resist putting in multiple plot twists. If you read the story, I hope you'll like it.

Do you often find yourself using personal memories and first-hand knowledge from your jobs, hobbies, etc., to come up with fictional material? If you do, and if these experiences are unmodified, I can only assume your life has been more eventful than mine. I suppose I could write about making ill-fated stock market investments, or watching Netflix movies until four in the morning, or regularly mowing my wife's newly planted flowers that I mistake for weeds--but who'd want to read about that? Instead, my stories usually consist of normal, routine happenings that I then inject with steroids, asking myself "what if" and plugging in exaggerations that (hopefully) make those incidents more interesting and entertaining than they were in the real world.

The person I always think of when this subject comes up is Nevada Barr, an excellent mystery writer who once lived the kind of life her fictional heroine lives now. Nevada was a park ranger for many years, like the main character of her twenty-plus novels, and the author's familiarity and comfort level with the National Park settings and her protagonist's occupation make her books authentic and believable--and even educational. (She once said she wasn't quite as brave and daring as Anna Pigeon is, but Nevada's face is always the one I picture in my mind when I read about Anna's adventures.) Most writers aren't fortunate enough to have that kind of background--and when they don't, they have to make up for it with research and imagination.

Author Marie Anderson once observed, in The Writer, "I used to write what I know. I used to write about infertility, motherhood, suburban middle-class life, blue-collar Catholic childhood, law school from a dropout's perspective. I'd send out those stories and never see them again, not even the SASEs. Then, somewhere, I came across a better rule: know what you write."

That sounds better to me, too.
Posted by John Floyd at 00:01