Diversity in More Than One Direction


by Art Taylor
This week was the final week of classes at George Mason University—though not the final week of the semester, I should stress, since exams and final projects and lots of grading are still ahead.

This semester marks the first time I've taught a course in "Women of Mystery" and the last couple of classes brought some interesting discussions and left me with plenty to think about myself. The final book we studied was Sue Grafton's A Is For Alibi, a novel I've taught before in the context of hard-boiled detective fiction—how this novel builds out of that tradition and shifts its focus. This time, obviously, we were looking at the history of women crime writers and female detectives, which offered a different context. In one class discussion, for example, we charted the great diversity of female characters represented in the book: from young to old, from working class to upper class, from single women to married women to divorced women and with a mix of mistresses in between, and from the domestically minded to the fiercely independent; as students pointed out, while Kinsey Milhone is always jogging and keeping an eye on her health, we also have a character saying that "Fat is beautiful" and arguing for special rights for the "grossly overweight."

But amidst all the diversity of women's experiences catalogued in the book, there was a key bit of diversity missing: As my students pointed out, nearly all the characters here are white.

Throughout the semester, we've examined all our stories and novels as windows into their respective eras: whether as glimpses into the roles and responsibilities of women in those specific times or as challenges to any prevalent expectations. As Maureen Reddy, author of The Feminist Counter-Tradition in Crime, has pointed out, the debuts of Marcia Muller in 1977 (with Edwin of the Iron Shoes) and of Grafton and Sara Paretsky in 1982 (with A Is For Alibi and Indemnity Only, respectively) coincided with the mainstreaming of the feminist movement—and specifically second-wave feminism. But some of the criticism of second-wave feminism, and part of its distinction from third-wave feminism, arose from attention to diversity beyond gender issues. In Bustle's timeline of the feminist movement, the last item from the section on second-wave feminism is the 1983 publication of Angela Davis's Women, Race and Class—and the editors add this commentary:

In spite of its social success, the second wave broke in the late '70s. The racial division that plagued the first wave remained throughout the second, and expanded from a black/white divide to include divisions along economic lines, between various minorities, and between lesbians and straight women. The internal divisions fractured the larger movement into competing factions, which disillusioned many feminists and society as a whole. 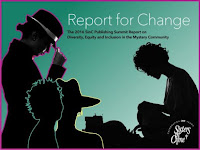 On the heels of our study of A Is For Alibi, and for our final day of class, we all studied this year's Report for Change from Sisters in Crime, a "Publishing Summit Report on Diversity, Equity and Inclusion in the Mystery Community"—fascinating reading start to finish and glimpse for my students into the many factors the influence book publication and impact readers: from writers' goals and intentions, to the expectations of agents and editors, and even to the inclinations (or disinclinations) of readers to cross color lines, for example. In the report, Linda Rodriguez talks about the little voice inside her head that said, "Mysteries are written by white people. About white people." An unnamed Latina writer points out that "Romance is white people in love; sci-fi is white people in space; mystery is white people solving crime," but if a genre novel is focused on Latino characters, it's Latino literature first. And with specific attention on reader preferences, Rachel Howzell Hall explained that "black readers have been crossing color lines in their reading all of their lives and being able to put themselves into the fiction worlds. If black readers can do this, why can't white readers do that in reverse?"

I won't try to summarize or sample the whole report here, but would encourage folks to read it themselves (the link above) for some perceptive and occasionally provocative insights into these questions about diversity in the mystery genre—and both for some signs of hope about increasing diversity in the genre and for several lists of writers based on race, ethnicity, and sexual orientation.

Coincidentally, as I was prepping for class, this article popped up on the New York Times: Tony Tulathimutte's "Why There's No Millennial Novel." Here's a sample paragraph:

Where are the successors to This Side of Paradise, The Sun Also Rises, The Catcher in the Rye, On the Road, Fear and Loathing in Las Vegas, Bright Lights, Big City, Generation X and Infinite Jest? Time’s Lev Grossman blames our increasingly “multicultural, transcontinental, hyphenated identities and our globalized, displaced, deracinated lives” for why any consensus about a single voice now seems impossible. I’d go even further and argue that the “voice of a generation” novel never existed to begin with. For starters, why did we ever pretend novels by straight white guys about straight white guys spoke for entire generations?

While we didn't read this one as a class (again, it wasn't published until just before our class meeting), I did bring in some of the column's observations and arguments to help amplify our discussion and our examination of how much has changed even since the early 1980s—and what those changes mean.