by Leigh Lundin
This is the last in a series about broad-range magazine writing. Thanks to all my colleagues who’ve chimed in these past several days.

When I was 15, the American Dairy Association sponsored a youth conference, inviting a hundred boys and girls for a weekend in Indianapolis. The symposium represented a lot of firsts for many kids: first hotel stay, first formal dinner, first formal dance, and first time adults seemed to take us seriously.

It was marketing, of course, but on the side of the angels. It focused on micro- and macro-nutrition, from food on a personal scale to feeding a burgeoning population. The upshot was that the ADA and its partners (Wonder Bakeries, Kraft, Green Giant, etc) sponsored an outreach competition, encouraging participants to propagandize civilization through our teenage charm.

In my case, they knew not what they were unleashing– a mad scientist bent on world domination through robots, alligators, and power-hungry computers. And eventually crime stories, but that would take a while.

That summer, I wrote articles for newspapers desperate to fill vacant space, The Shelbyville News, The Indianapolis Star. Mainly I wrote speeches. Radio WSVL (now WSVX), set literally in the middle of a corn field, gave me broadcast time. I shudder to think how awful those radio chats might have been. But, community presentations became my thing. At small gatherings, I gave talks using props like Albert my alligator or sometimes taking along my robot. Amazing when I think how tolerant adults were back then. Possibly I stunned them into submission.

The feminine participant of our county, Susan DePrez, grew up in a neighboring town and was a year ahead of me in school. We vaguely knew one another. In other words, she was a pretty, sophisticated, teenage older woman and I was the kid dweeb. There’re makings for a movie here, Hollywood.

Documenting everything, I clipped the articles from the newspapers. With luck, they’ll never again surface to embarrass me, but as it turned out, Susan and I won the respective girls’ and boys’ divisions of the competition. Another dinner and a check, followed by glory, fame and fortune.

The Art of the Article

In the meantime, I had desultory articles published here and there: a New England sailing periodical called OffShore specializing in photographs of tall ships, articles for a zoo newsletter, and occasional articles for Datamation and InfoWorld magazines for those of us in computing. This last brought about my first experience with a heavy-handed editor who chopped a manuscript into unrecognizability, completely altering the meaning of the article. Fortunately, editors since have been kind and applied a much lighter touch.

Occasionally in movies you’ll see some computer guru who peers at multiple screens as he madly types away. In real life, that’s seldom seen these days but 20-25 years ago, multiple monitors were much more common. The alternative for users who wanted more than one terminal session was a physical switch to bounce between screens.

Ta-da! I wrote a package that allowed such super-users to switch via software… no extra hardware required. Unfortunately, salesmen had no clue how to market it, let alone describe it. In response, I wrote a fictional introduction to the manual describing how Mr. Strangebottom and his programming staff might use the product. After an initial “you can’t put humor in a tech manual” objection from the sales people, the fictional introduction achieved a modest cult following. Fame and glory followed.

I wrote similar introductions for our other software products, including a backup-restore package, an email encryption routine Oliver North should have bought, and a couple of others. The writing was possibly passable, but now I realize creativity was bursting in my veins.

Two things happened about the same time. I sent a story to Ellery Queen Mystery Magazine way before my writing skills were ready. The editor at the time, Eleanor Sullivan, found minor humor in the cover letter and sent the manuscript back with an encouraging personal note. That was kind of her.

Meanwhile, I proposed an idea for an article to ComputerWorld, the daily newspaper for computing professionals. In fact, I pitched an interview of an unusual fellow who wanted to legally change his name to a number. The editor said, “We don’t do interviews especially of non-notable people.” I pointed out (a) national news outlets were trending with this story and (b) I happened to know this guy, without explaining how vague and tenuous my acquaintanceship was.

The editor grew interested but expressed doubt I could pull off an interview while television and national magazines were vying for his attention. I expressed 90% confidence in landing an interview, about sixteen times my actual estimate given sunny skies and a good wind.

“Okaaaaay, sonny. If you think you can. we’ll take a look at it.” I considered that a sale.

Then I had to convince Mr 1069 (One-Zero to his friends) to sit down with me. As it turned out, he desired recognition by computing professionals, the curators of information numeric. As I would discover, professional acceptance or at least cognizance lent validation and perhaps legitimacy to his quest. Interviews by the networks and major publications like Time Magazine were nice, but ComputerWorld offered something kindred to his digital soul.

Perhaps because I wasn’t a professional interviewer, he felt comfortable as we chatted late into the night, barely pausing for food intake. To my surprise and possibly ComputerWorld’s, they ran my article on page two.

I stumbled upon that long ago interview on-line. Google had indexed it as part of their Google Books project. To my surprise, it reads a little better than I remembered. It’s not prize-winning journalism, but I had persuaded one party to grant an interview and convinced a newspaper to publish it. That has to count for something!

Here now is the outcome of 1069's mission to change his name: 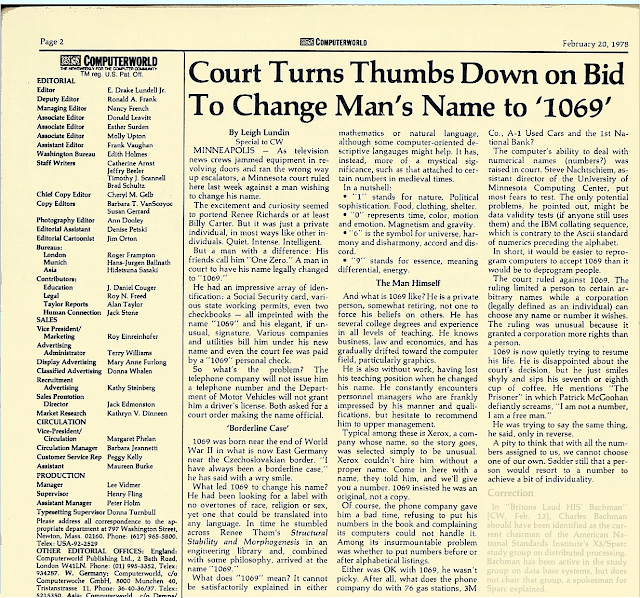