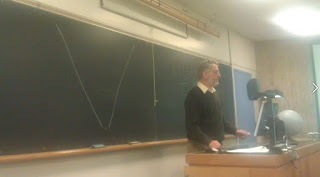 When Leigh - or was it Velma? - suggested a theme week about writing for non-mystery magazines, I said I could contibute nothing.  Then I realized that if you include academic journals I have a bit to say.

You have probably heard of "publish or perish," the idea that college faculty have to do research to get tenure and keep their jobs.  And you are right.  The intensity depends on the field and the institution.  I know people who are expected to publish several short articles a year, and others whose job security hangs on making it into certain major journals.

Fortunately neither of those apply to me, but I am expected to appear in scholarly journals.  So what's the difference between one of those and a magazine?  At the most basic, a scholarly (or academic, or peer-reviewed, or refereed... they all mean essentially the same thing) journal is one where, rather than deciding on the fate of an article herself, the editor sends it to people who have written on similar subjects (peers) for their assessment.

This is considered the gold-standard, the most reliable and authorative type of publication.  And having said that, let me introduce you to Retraction Watch, a website that simply lists scholarly articles that have been renounced by their authors or publishers because of errors.  These errors could be anything from deliberate fraud to an accidentally screwed-up graph.  Some authors have been known to retract an article because, decades after publication, the science turned out to be wrong.

And don't forget Scholarly Open Access, a website created by librarian Jeffrey Beall, which reports on what he calls "predatory journals," which look like scholarly material, but will accept anything you will pay them to publish.  "Vanity publishing!" you shout.  Well, yes.  But it's more complicated than that because in some academic fields you are expected to pay a per-page fee for publication - or at least if you want the article to be "open access," so anyone can read it.  It is so common that many universities have funds to pay for their professors page fees.  Or if a grant pays for your research, you can figure it into the grant request.  But the non-predator journals still reject most articles that are submitted, and won't take your fee until their referees have reviewed your work.


If you have begun to suspect that publishing scholarly journals is a license to mint money, there are many who will agree with you.

Let's get to a few of my own experiences in the field.  Many years ago I did some research which I thought was interesting but probably not worth a publication, so I put it up on a webpage of my own.  The managing editor of an editor read my work and invited me to turn it into an article for his journal.  Great!  I updated the info and submitted it, and waited.

And waited.  And waited.  Eventually (I think a year later) the editor-in-chief contacted me to say he had found the manuscript stuck in a desk drawer.  If I wanted to update it again and resubmit it he would consider it (!).

Another time I felt obliged to explain to the committee who was evaluating my work for, say, 2011, that the reason I included an article  published in a 2010 journal issue was that the publisher had been running late and slapped the wrong date on  so a year would not be missing from the journal's run.  And yes, these were both considered respectable publishers.

But my favorite story of scholarly hijinks involved the Congressional Serial Set.  These books have been published since the 1830s and basically include reports to and from Congress.  I found something very bizarre in one volume and showed it to my friend August A. Imholtz who is an expert on the Set.  We wound up co-writing an article which was published under the name "'Reckless and Unwarranted Inferences': The US House Library Scandal of 1861."  As befitted such a pompous title we wrote it with great seriousness and a flurry of footnotes.

As soon as it was published in a scholarly journal, with August's kind permission, I rewrote the same bit of history for laughs and sent it to American Libraries magazine which paid me for it (now that's the direction money is supposed to flow in publising) and put it up on their website with the title How Overdue Books Caused the Civil War.


You can read the lighter version by following the link above.  In either version the story is this: After Lincoln was elected and southern states started to secede the New York Times published an article claiming that the southern ex-congressmen were stealing books from the "Congressional Library" to start their own. It turned out to be a mixture of wild gossip, bad journalism and shoddy library management.  Oh, and it involves the Dred Scott Decision.  Really.

Because when you dive into the academic swamp you never know what you will find.