(No pics this time around, and there's a writing connection, but it only comes at the end. Read on, if you dare...) 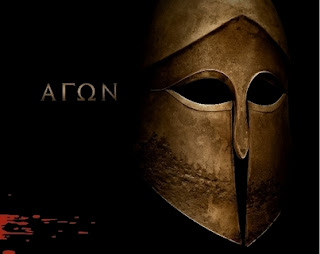 I believe that we are defined by struggle. The ancient Greeks had a word for it (of course!).

We get our English word "agony" from it.

Not really the same thing.

The idea behind the notion of "agon" is that working to overcome obstacles placed in our paths by the gods/Fate/Yahweh/Allah/A Head of Lettuce Named Bob improves us. That it is literally not the achievement of the goal, but the effort it took to overcome opposition that kept us from it, which makes us who we are.

I further believe that we as human beings currently inhabit the Age of Agon.

I've been doing pretty lousy in the prediction market lately (*cough*I'm with Her*cough* *cough* *cough*), but I'm going to go out on a limb and make a couple now, just to get them down and out there. At the very least they might be good for a laugh when viewed some day soon with the benefit of hindsight.

I am going to be MUCH more productive writing-wise over the next eighteen months.

All that time saved no longer checking the 538 blog multiple times per day, and that headspace freed up by no longer following election news in rags like The New York Times, The Washington Post, Vox*... all much better spent devoted to any number of works in progress.

And it's not just about headspace. There is a school of thought out there that art flourishes in direct proportion to the amount of chaos in the world. The more "unsettled" the society, the greater expression of that societal upset. So collective angst finds its outlet in modes of expression such as art.

Plus, let's face it: writing is cathartic. And writing about what bugs us can be profitable. It's really all about having an audience and finding them. Something tells me that an audience for the sort of fiction I have in mind for the coming months won't be too difficult to find.

As completely arbitrary proof of this, I produced way more in the way of paying and paid-for writing from 2004 (when I signed my first book deal) till 2009 (When I met my future wife) than during the past eight happy years. Some would say that finding a wonderful woman, marrying up, combining our households, buying a nice house in a terrific neighborhood, and having a child might have had something to do with that. And they might have a point.

But if the past two years have proven anything, it's that these days, in the current climate, facts are what you make of them.

Oh, and let's all save our jokes about the coming age being a potential golden age for satire. We've been living in one of those for at least the last two millennia. Maybe the last three.

(*Sarcasm. I don't really think they're rags. I think they collectively blew the single biggest story of the decade, but they had a lot of company.)

The current round of angst in all corners of this country will not pass quickly, but it will pass. And when it finally does come, it'll be swift. Nearly overnight.

Because nothing unites the American people like a common enemy.

And on that optimistic note, I'm going to close this, my sole politically-related post (One and done, I promise. No more after this. There's "grieving," and there's "wallowing." The former is healthy. The latter is the stuff of melodrama.), and get back to talking about the writing craft.

See you in two weeks, on Thanksgiving Day, when the subject will be "plot". Which, when you think about it, is really a completely different form of agon!
Posted by DoolinDalton at 02:03