Lost in the Translation


by Leigh Lundin
When it comes to translations, we monolingual North Americans are stuck with (and often stuck waiting for) translations as we catch up to the rest of the literary world. That makes us highly dependent upon the talent of the translator who, if not exactly anonymous, nonetheless wields enormous power over the final result. 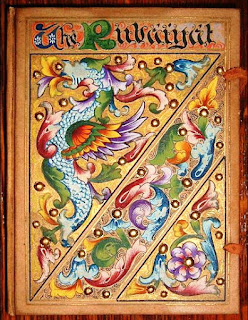 Upon occasion, translators become almost cult figures. Take for example The Rubáiyát of Omar Khayyám. Wikipedia lists about twenty different attempts at translation of the famed Tentmaker’s tantra. (Knowing Wikipedia, we can assume that means between two and twice twenty-two.) Its best known English translator is Edward FitzGerald.

To me, FitzGerald represents an interpreter rather than a translator. He sought more the spirit of the original work than a literal, word-for-word conveyance, but also shaped the product in his own seductive way. Rather than translate the entire body of poetry, FitzGerald chose to transmogrify and rework only five to ten percent of key sections, gradually revising his lexical rendering over time.

The Rubáiyát became highly valued in the latter 1800s and was often printed in gorgeous, gold-illuminated editions. A jewel-encrusted copy was lost on the Titanic. In these days of Middle Eastern xenophobia, it’s worth noting the enormous influence of The Rubáiyát upon our language and culture. It’s difficult to read more than a few dozen quatrains without stumbling upon a familiar phrase such as “a loaf of bread, a jug of wine, and thou.”

Dorothy Sayers is best known to mystery readers for her Lord Peter Wimsey novels and short stories. To scholars, she’s also well regarded for her analysis of La Divina Commedia. Her translation of Dante’s work focused on maintaining the original rhyming structure, which resulted in occasional idiosyncratic wording. However, her notes are considered unparalleled in their detail and accuracy.

John Ciardi, a highly respected poet, began his translation shortly after Sayers. His version became renown for capturing the spirit of The Divine Comedy. Students read Sayers for the technical aspects and Ciardi for the art. Recently, Mark Musa and Robin Kirkpatrick have published ‘more modern’ versions.

I often enjoy mysteries by non-English authors– French, Russian, Scandinavian, and of course the famed Argentinian, Jorge Luis Borges, who’s been mentioned in these pages. Note that Borges wrote a history of The Rubáiyát and Borges' father, Jorge Guillermo Borges, wrote a Spanish translation of the FitzGerald version of The Rubáiyát.

Sometimes translations turn out less than satisfactory. Mark Twain did a literal retranslation of one of his stories in French back into English with hilarious results. Twain made the point that we can’t always be sure how much of the author’s original sound and feel make their way into other languages. In many cases, it’s difficult to connect with a story as if trying to penetrate an unseen barrier.

Stieg Larsson’s Lisbeth Salander / Mikael Blomkvist series (AKA the Millennium trilogy: The Girl with the Dragon Tattoo, etc.) impressed me so much, I haven’t yet seen the films– I didn’t want the movies to mess with the image in my mind. I credit the translator for making that bond possible.

Despite my name, I know less Swedish than Latin or even French, possibly even isiZulu. Not a lot of novels are published in Latin these days, so I require not merely an interpreter but a spirit guide.

Reg Keeland seems to be the pseudonym of translator Steven T Murray. According to his bio, Murray works not only in Swedish, but Danish, Norwegian, German, and Spanish. I can’t guess how much of a translator’s influence colors the underlying work, but I suspect less is more, the less visible the better.

I don’t doubt that takes considerable talent. North American fans owe a debt to the unseen hand that made Larsson accessible to English audiences.

Clever fans may notice the title of this article contains a double meaning. A well-done interpretation of a good novel can indeed leave an absorbed reader lost in the translation.
Posted by Leigh Lundin at 00:00