Past or Present: A Tense Situation

Western actor: Are those our teepees?
Director: We've upsized to wigwams. Teepees are past tense.

Consider this. You've come up with a great idea for a short story. In fact, you've been thinking about it awhile, you know who your POV character is, you have a pretty good feel for the plot, and you've even picked out a catchy title. But when you sit down to start typing the opening, there's something else you'll have to decide on, something you might never have thought about, only a few years ago:

Will your story be told in past tense or present tense?

The truth is, I don't think about it at all. I prefer past tense, and so far that's how all my stories have been told. 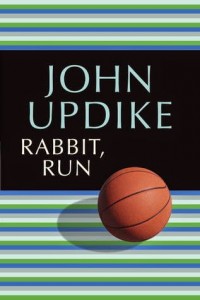 Here's the strange thing: I don't mind reading stories written in present tense. I just don't like to write them that way. I don't think I'd feel comfortable doing it, and besides, I would probably always be accidentally reverting to past tense and having to correct myself. (As Dirty Harry Callahan once said, "A man's gotta know his limitations.") I sure don't need to be bothered with doing any more self-editing than I already have to do.

Why is present tense so popular in contemporary fiction? Most writers say it's because it lends a sense of immediacy to the story--a sense that this is happening right now, at this very moment, and we're all witnesses to it. When the robber turns away, the security guard draws his gun and fires. BAM.

That's not a bad idea, and when done well it works well. But writing in the past tense--when the robber turned away, the security guard drew his gun and fired--seems more natural to me. I like feeling as though I'm telling the reader what happened, not what's happening, and I'm not convinced that I give up any suspense by doing it that way. Past tense is traditional storytelling, the old classic once-upon-a-time approach. Or maybe I'm just getting old.

From what I've been able to find, it seems that there are several big advantages and several big disadvantages to present-tense fiction. On the plus side of the writing ledger are (1) the aforementioned "immediacy" and vividness of the action and (2) the fact that present tense probably makes it easier for the reader to feel a connection to the protagonist. On the minus side, present tense supposedly makes it harder to (1) manipulate time, (2) generate suspense, and (3) create complex characters.

Arthur Plotnik (what a great name for a writer, sort of like Francine Prose) says, in his book Spunk & Bite, "Present tense . . . imparts a live-camera mood that is relatively new to literary prose, as well as to journalism." Then he adds, "But in lesser hands, present tense can diminish the spell . . . It can seem affected, breathless, and flighty." He says it can be used to keep readers on edge, but that it can also "grow tedious if the inventiveness flags."

The key phrase, there, seems to be "in lesser hands." Maybe present-tense fiction is one of those don't-try-this-at-home endeavors. If you're a novice, proceed with caution. If you're talented enough, full speed ahead. (But watch out for those inventiveness flags, on the side of the road.)

NOTE: It did occur to me, while putting together this column, that there are at least two forms of writing that are and have always been done in present tense: jokes ("A guy walks into a bar . . .") and screenplays. I've never written jokes, but I have created several screenplays--and strangely enough, writing those in present tense seems correct and natural. Go figure. 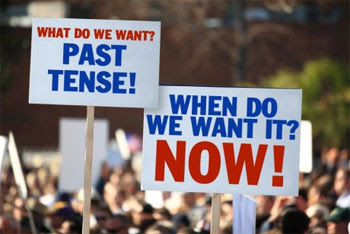 He types the last sentence of the SleuthSayers post, clicks "Publish," closes the Blogger program, and pushes back from the computer. His Saturday column is finished and scheduled. "Guess it's time to rake leaves now," he says to his wife.

He typed the last sentence of the SleuthSayers post, clicked "Publish," closed the Blogger program, and pushed back from the computer. His Saturday column was finished and scheduled. "Guess it's time to rake leaves now," he said to his wife.