by David Dean
by David and Bridgid Dean

If I had to choose a few adjectives with which to describe my life, it might be these: fortunate…blessed…lucky…providential. It’s not that I haven’t had a few set-backs and trials along the way—I wouldn’t be human if that weren’t true, but I have a lot to be grateful for—I have Bridgid… my daughter.

Don’t get me wrong, I’m grateful for her siblings, too: older sister, Tanya, and younger brother, Julian. But, Bridgid and I, over the years, have forged a writing connection. I’ve shared a reading connection with all of them, but Bridgid evolved into a writer and that, as the Wizard says, “Is a horse of a different color.”


In order to properly train her for her chosen profession I’ve required that she read and edit nearly everything I’ve written over the past decade. This was not done, as some may suspect, because I am one of the cheapest SOB’s on the planet, but in order to provide depth to her appreciation of fine literature (mine) and round out her college education. The fact that her editorial eye virtually removed the element of chance in my story acceptance ratio is neither here nor there. I would have done her this fatherly kindness in any event. Plus, I did pay for that education. Now she’s gone and penned a novella. 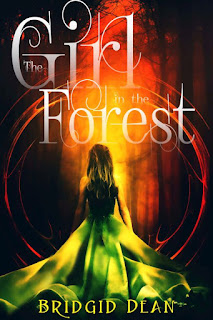 No, it’s not crime fiction like her old man pens, but it does contain intrigue, shady characters, and betrayal. Something we can all relate to. My daughter’s story is set in a world in which the border between reality and myth blurs and no one you meet is exactly whom they may appear to be. It’s fast-moving, readable, and features a very sympathetic heroine. As to how it came about, well, that’s a story I’ll leave for Bridgid to tell, as it’s as unique as the book she’s written. Oh, by the way, I finally returned the favor by helping to edit this, her first published work.

I also want to thank mighty Leigh Lundin for suggesting this post in the first place. Thanks, Leigh!


The idea behind The Girl in the Forest was born of a rather unfortunate event. In August of 2011, shortly after we were married, my husband and I had a tree fall on our house. Not a limb, and not a small tree, but a massive oak.

We were at a dinner party at my in-laws when it happened; when we drove around the corner and saw our little hundred year old house, half smushed, my Volvo buckled under a thousand pounds of oak, I could only laugh. A crazed, reality-is-standing-on-its-head kind of laugh.

My husband went inside and found the house full of gas. We waited in the back yard for the fire department to arrive, our cat Zelda looking from us, to the tree, to the house, as though asking, "Do you see this?"


After the fire department turned off the gas connection my husband drove us back to his parents' house. We spent the next ten weeks living in their guest room before we acknowledged that this process was going to take a really long time, and we'd better rent something. In the end it was almost a year before our house was fixed and we were able to return home.


Those first two months were incredibly stressful, but things began to look up when we found our rental, the little cottage in the woods. We'd never lived outside of town before- we loved it!

Our landlord had a grand old home on what felt like hundreds of acres, with three rental cottages on the property. Ours was a five hundred square foot cottage surrounded by trees. It had a green metal roof, wisteria climbing the porch railings, and was so small as to be almost one room. We slept in a loft that looked out over the great room and the huge wood stove. As night fell you could sit on the porch and watch the sun set over the Blue Ridge Mountains, linger while the stars came out, then hurry inside when the coyotes started to howl.

The combination of natural beauty, isolation- and even something about the self-contained quality of a house that small- had me, before long, thinking about fairy tales. In so many of them, there is something magical about the cottage in the woods. I suddenly felt I was experiencing a bit of this first hand. Inspired by the surroundings, (and with the peace and quiet to really think!) I began to write the first draft of “The Girl in the Forest.”


This novella is a modern retelling of the Hansel and Gretel story, set it in a town not unlike Charlottesville, VA, where I currently live. The protagonist, Jolie, is new to the town, having moved there after her mother's death. She feels alienated and lonely, friendless at a crappy job, with only a cat for company. The recurring nightmares keep her from sleeping well, and she eventually gets fired from her job. At a bookstore she meets Jamie, a strange man with a past who secures her a job at his friend, Greta's, bakery. As Jolie starts to learn the ropes at this new job, the questions stack up quickly: What are Jamie and Greta planning? Who is Greta running from? And what is the creature that Jolie sees in her dream each night? And, perhaps most puzzling, why is Jolie the only one who can see the cottage in the woods?


It was not until I'd finished writing the fourth draft and handed it to my dad that I realized I'd written something of a Fantasy/Mystery crossover. You might think, after editing so many of my dad's stories, that a fact like this would not sneak up on me. Yet somehow it did, in the same way, I hope, that the inevitable conclusion to my story will sneak up on the unsuspecting readers. Like a coyote, or a wolf, or some other hungry creature, waiting in the shadows of the forest.

Thank you to Leigh Lundin and the SleuthSayers audience for the opportunity to tell my story-it's been a privilege!
Posted by David Dean at 00:01