A Convention for the Rest of Us

There's a famous Seinfeld episode set during the December holiday season in which we learn that George's father, Frank, doesn't celebrate Christmas. It's too commercial for him. Wanting a different kind of holiday for his family, he came up with his own and named it Festivus. And Frank didn't just name this holiday. He gave it teeth. Instead of a tree, there's a plain aluminum pole. Instead of presents, Festivus has the feats of strength, in which someone at dinner must wrestle and pin Frank. And instead of singing carols, Festivus requires the airing of grievances. "I've got a lot of problems with you people," Frank said during that episode, and my heart swelled. But the best part of Festivus is its inclusive nature. As Frank described the holiday, set on December 23rd of each year, it's a Festivus for the Rest of Us.

I wasn't thinking about Festivus when I came up with my own mystery convention two weeks ago. I was sitting on my couch with my dog, Jingle, reading Facebook posts from friends who had already headed down to New Orleans for Bouchercon--the world's largest annual mystery convention. Determined not to feel left out, even though I couldn't attend Bouchercon this year, I decided that Jingle and I would convene at home, and I would share our activities on Facebook. And Jinglecon was born. 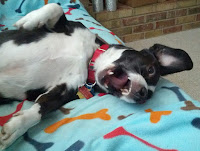 With a focus on animal mysteries, Jinglecon had book bags, a book room, the New Dogs Breakfast, an interview of convention namesake Jingle by Scooby Doo, an animal fashion parade, Jingle Go Round (in which mystery/crime authors posted about their books, some offering giveaways), and panels. Many, many panels, including Fifty Shades of Bay(ing): Racy Animal Mysteries; Squirrels and Foxes and Cats, Oh My: All About Antagonists; Dogs Gone By: Historical Animal Mysteries; Dogbumps: Spooky Animal Mysteries for Kids; and my personal favorite, The Bitch is Back, about female dogs who return to their hometowns to take over the family business and become amateur sleuths on the side. 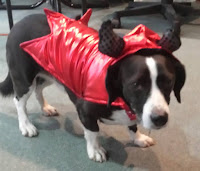 I hadn't planned on Jinglecon becoming so involved. I had originally thought it would involve one or two funny posts each day with some photos. But then I started hearing from friends, readers and writers who couldn't go to Bouchercon, who were checking into Facebook repeatedly each day, looking for new posts. They were thrilled that this year they didn't have to feel left out because now there was a convention for them. Jinglecon had become the equivalent of the Festivus for the Rest of Us.

Social media is wonderful because it can allow the world to feel smaller. It can allow readers and writers to connect through things like Facebook and Twitter and this very blog. But it can also result in people feeling left out. Before social media, non-attendees might have heard some talk about how Bouchercon was after it ended, but they didn't have access to hundreds of posts as the convention went on, talking about all the great panels, the parades, the fun at the bar. Now we have that access. And it's wonderful, but it can also make people who can't attend feel left out.

So I was so pleased that my stay-at-home virtual convention enabled people who couldn't travel to New Orleans to feel that they, too, were participating in something fun. We talked about books we love. We gave books away. We had a lot of laughs. As a convention goes, I'd call it a success. Others clearly felt that way too because I had people ask me to open early registration for next year. So Jinglecon 2 will happen next fall. I'm planning to attend Bouchercon myself in 2017, but I also plan to run Jinglecon at the same time.  I loved enabling people who couldn't attend the in-person convention this year to feel that they were part of the fun, too. And with a year to plan, next year's virtual convention should be even better.

So look for #Jinglecon posts on Facebook next fall while Bouchercon is running in Toronto. Jinglecon is open to anyone who loves mysteries, no matter where they are. (Indeed, this year we had a bunch of people attending Bouchercon checking in on the posts.) But Jinglecon is especially aimed at those readers and writers who want to connect but aren't able to get to Bouchercon. Jinglecon--it's the Festivus for the Rest of Us.