by John Floyd
Two weeks ago today, while my friend Elizabeth Zelvin was entertaining our loyal SleuthSayers readers far better in this timeslot than I could've, I was in the middle of another kind of literary endeavor. From 9 a.m. to 6 p.m. on August 20, at the height of our summertime heat and humidity, I participated in what was billed as the state's biggest lawn party: the second annual Mississippi Book Festival, held on and around the grounds of the State Capitol Building in downtown Jackson. Also known as the state's Largest Gathering of Sweaty Writers and Readers.

My point is, there are a lot of writers here, and I think most of them--at least most of those who are alive and still pushing keys or pencils--came to the recent Book Fest. In fact we had plenty of authors from elsewhere as well. The number of attendees expected last year, at the first annual festival, was 1,000; more than 3,000 showed up, including John Grisham. This year, according to the official figures, some 6,200 people attended the many panels throughout the day, and several hundred more were outside and around the grounds. And, like last year, several attendees DFOed (in medical terms, they succumbed to the heat; in Southern terms, they "done fell out").

This time, more than 120 authors served on 30 different panels held in and around the Capitol Building (I was on the panel for the recently-released Mississippi Noir), and about 70 more were featured in an "Authors' Alley" venue, an area where self-published writers could display and sell their wares. Also on the grounds were tents for different publishers and bookstores here in the state--I was part of Dogwood Press's tent, along with our head honcho Joe Lee and fellow authors Randy Pierce and Valerie Winn. There were also additional activities for panelists, including a cocktail party at the Old Capitol Museum the night before, an authors' breakfast the morning of the festival, and an after-event celebration at a nearby restaurant/bar.

It was a long day, and as hot as Satan's pitchfork, but that surprised no one--this was, after all, mid-August in the Deep South. And I think everybody had a good time. I met a great many interesting people, renewed old friendships, sold and signed some books, guzzled a dozen bottles of water, and gave and received a lot of damp hugs. At the signing tent after my panel, I was fortunate enough to sit beside one of my longtime heroes, John Hart, who's written some of my favorite mystery/crime novels. 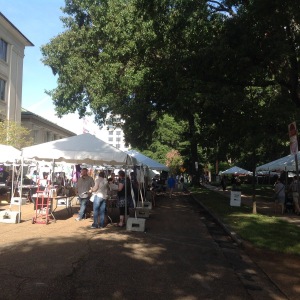 Now for my question. I've heard that a number of states have annual literary festivals like this--last year at Bouchercon I visited with a lady who was in the process of organizing a debut bookfest for Virginia. Have any of you gone to and/or participated in one of these, or something similar? Was it state-sponsored? Was it well attended? Did you find it worthwhile?

With this year's Bouchercon drawing ever nearer, our event the other day reminded me how much I enjoy this kind of gathering--being in the company of fellow writers and readers, and spending hours on end talking about nothing but stories and books and writing and the magic of fiction. And the great thing about B'con is that the focus is on mystery writing. What could be more fun than that?

I hope you'll be in New Orleans, I hope we'll be hurricane-free, and I hope it'll be drier and cooler than usual. And if it's not, I hope you won't DFO on Canal Street.