by Robert Lopresti
Someone once said that the essence of story is this: Drop your hero in a hole.

He* tries to get out. Or he dies trying. Or he resigns himself to life in the hole. You get the idea.

More recently, somebody - again, I don't know who - said the key to successful fiction is this: Put your hero in a hole. Then drop rocks on him.

In other words, get the character in a bad situation and keep making it worse.

All this came to mind because I just finished Tipping the Valet, a recent mystery by K.K. Beck. And she takes an approach to that basic formula that I don't recall seeing before. (If you can think of examples, stick 'em in the comments section.) 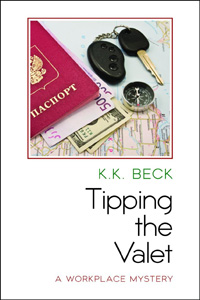 Here is the set-up for the novel: Tyler Benson is a young man working for a valet service in Seattle. He parks the cars at various fancy restaurants, and he's good at his job.

But on his first night in a new restaurant someone zooms by in a fast car and tries to assassinate Scott Duckworth, a software billionaire, injuring another valet in the process. And just to make things messier, Tyler's dad shows up drunk, hoping to run into his old pal Duckworth, who fired him years ago.

That may not sound like Tyler is in a very deep hole. More like a small dip in the road.

But here is what the reader knows and Tyler doesn't: A gang of Ukrainian car thieves is working with some of the other valets. There is a dead body, and Tyler's fingerprints are intimately associated with it. Plus the cops suspect Tyler's father of the attempted murder of the billionaire.

Pretty messy, huh? But here's what strikes me as unique: Beck has all these rocks piled up over Tyler's head but none of them have landed yet. The reader knows he is in deep doo-doo, but he thinks he's just suffering a minor inconvenience.

And that is a very cool form of suspense.

When the rocks tumble down, about one-third of the way through the book, they all strike at once, and Tyler finds he is in a very deep hole indeed.

But Beck - and the reader - are flying pretty high.

Getting back to the man in a hole theory, I say no. What you see below, two-minutes from the wonderful movie Microcosmos, is the essence of story. I saw it in a theatre and when our hero conquered, the audience went mad with cheers.

* I'm using masculine terms because the protagonist of the book I am going to talk about is a man.
Posted by Robert Lopresti at 00:00