Harry Potter and the Love of Reading


by Melissa Yi
I love Harry Potter.
When we moved to Montreal for my residency in family medicine, I was too cheap to buy the next two Harry Potter books, so I read at least one book in French, for free, from the library. To my surprise, it wasn't as funny. The jokes didn't translate. The funniest part was me figuring out that bouledogue meant bulldog. So I broke down and bought the books in English, which turned out to be a great investment, because after I caught gastroenteritis from one of my little patients on paediatrics, I ended up reading the first four books over and over again.

Harry Potter and the Goblet of Fire was my hands-down favourite. The Quiddich! The tournament! Ron and Hermione! The agony of Cho! Dragons! Merpeople! The heartbreaking but necessary ending. Oy oy oy oy oy oy oy, to quote another one of my patients.

The magic wavered during Order of the Phoenix. Harry was so angry, Umbridge so unbearable, that I finished it and all the other books, but I closed my heart. I read the battle scenes quickly, bracing myself for the deaths of people I loved. I never re-opened books 5 to 7 again.

It's only in the past few months, starting the series with my ten-year-old son, Max, that the magic has not only returned, but doubled, tripled, and had quintuplets. I had re-read the first four books, of course. But it took me until a good halfway through OOP (Order of the Phoenix) with Max before I finally pushed everything aside and said, "Nobody bother me until I finish this book." Then I re-read the last two books and found them much better than I'd remembered. Yes, even the epilogue.

I dragged my children on a two-hour drive to their first-ever Harry Potter unveiling. I was working the next day, and they fell asleep on the way there and back, so we only stayed for about half an hour, but I'm glad I did it. I wished I could've made it to the parties in Winnipeg (thousands gathered in Assinboine Park) and Calgary (transformed into Diagon Alley!).

So, on July 31st, Harry Potter and JK Rowling's birthday, I had to work in the emergency department from 0800 to 1800. I wore a white shirt, a tie, and a velvet jacket in their honour. But I hadn't stayed past midnight the night before to buy a copy of Harry Potter and the Cursed Child, so I'd either have to buy an e-copy after work, make a special drive in for a paper copy on my day off, make my husband pick one up, or do without until they shipped a copy to my rural house.

Enter Tiff, a fellow HP mega-fan and unit coordinator. On her break, she headed to the bookstore and picked up a copy for her and a copy for me. Mischief managed!

I finished reading Harry Potter and the Cursed Child this morning. It wasn't as complex and finely-wrought as the novels, but it still made me think about good and evil, and I teared up more than once.

I don't want to imagine a world without Harry Potter. Not only do I love the stories, the author, and the fact that JK Rowling supports charities, but there are studies on how Harry Potter and other fiction can create empathy, especially in young readers. Plus other fantasy authors, like Linda DeMeulemeester, have benefited from the rising demand for new worlds.

Is it any wonder that our baby was born with a lightning scar? ;) 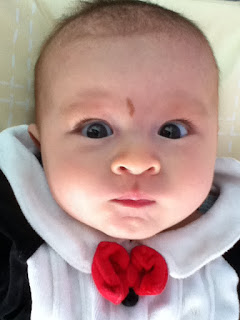 Dear Jo,
Thank you for all you've done.
Love,
Melissa