I'm like most writers– I read a lot. Sometimes it comes in spurts as time and energy prevail. I don't often write book reviews because most places want you to say at least one negative thing. I have a hard time doing that. First, if I don't care for the book, then I'm not going to write a review of it, Second, I know how hard a writer works to write the book and just because there might be something I don't like, that doesn't mean that someone else won't love it. With that said, I must mention two books to all of you. The first is Fool Me Once and the second is Home. Yes, both are by Harlan Coben. Both are quite different but, both are excellent books. I have to say I can see why Harlan is an international best seller.

Fool Me Once came out in March this year. It's a suspense thriller designed to keep you up all night and reading all the next day if you can't finish it in one sitting. The main character is a woman special-ops pilot named Maya. The woman is cool, collected under fire, intelligent but flawed like all good characters are. The story opens with Maya trying to get through her husband Joe's funeral. She buried Joe three days after his murder. Maya is barely holding herself together. Her two year old daughter, Lily, is too young to understand, but at the last moment Maya worries about what Joe's family might say and decides her to bring the child:

Hi everyone, my husband was recently murdered. Do I bring my two year old daughter to the graveyard or leave her at home? Oh, and clothing suggestions? Thanks.

After the funeral and receiving line and all the sympathy and thank yous for coming and Joe's family finally leaving, Maya stands at the graveside staring at the hole, wondering what she should say to her husband. Her friend, Eileen, who has been entertaining Lily, persuades Maya back into her car and heads home. Once there, Eileen says, "I've been meaning to give you something."

It's a nanny cam that looks like a digital frame. "The maid Isabella has been with Joe's family for years. Why do you think I need a nanny cam?" "Because when it comes to your daughter, you don't trust any one." Maya has to admit that was true. 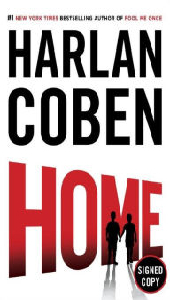 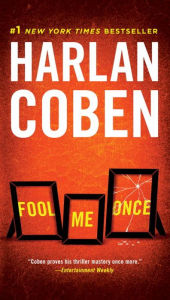 Home by Harlan Coben is due out September 20th. This book features Myron Bolitar, the sports agent investigator series character that started Coben on his way.

Two young boys were kidnapped from wealthy families who were friends. In fact, the boys, age six were playing together at the home of one of the boys. A ransom was demanded then nothing more was heard. No more calls with instructions to leave the ransom money. No photos or videos. Nothing, no trace, no bodies, just nothing.

Ten years pass and Myron hears from his old friend Win that one of the boys has surfaced in England. Win's nephew had been one of the boys taken. Is this Win's sister's sixteen year old son or is the son of the other family?

Where has the boy been for ten years? What does he know about the other boy? What memories does this teenager have of the ordeal and what will his life be from now on? What about the two sets of parents? How will each cope as they discover whose boy is this?

Once again, Harlan delivers on a story that keeps you turning pages and wondering about the true meaning of home.

I read the first Myron Bolitar book years ago.  It's awesome to see a writer continue to stretch his talents, grow and become famous. I know you will enjoy both books, so don't hesitate to put both on your wish list.  Both are from Dutton and are or will be available from your favorite mystery bookstore. Or any bookstore for that matter.
Posted by Jan Grape at 01:25