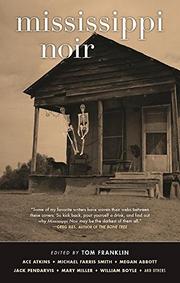 This past week, Akashic Books released another anthology in their award-winning series that began in 2004 with Brooklyn Noir and that has since included Boston Noir, Miami Noir, New Orleans Noir, and many others. According to the publisher, "Each book comprises all new stories, each one set in a distinct location within the region of the book." This one, Mississippi Noir, contains (insert drumroll, here) one of my stories.

Tom Franklin, the editor of this anthology, did an outstanding job of putting the book together. For those of you who don't know him, Tom--who was a Guest of Honor at last year's Bouchercon--is a great guy, an excellent writer, and a teacher in the MFA program at the University of Mississippi. I first heard of him when his short story "Poachers" won an Edgar Award in 1999 and then appeared in that year's Best American Mystery Stories. Since that time, he's had five books published: Poachers (a collection containing the title story); Smonk; Hell at the Breech; Crooked Letter, Crooked Letter; and The Tilted World. He and his wife Beth Ann Fennelly, also an author and also an MFA teacher at Ole Miss, co-wrote the latest novel.

The anthology, which had its launch signing this past Thursday at Square Books in Oxford, Mississippi, features stories by sixteen writers, including Ace Atkins, Megan Abbott, William Boyle, Michael Kardos, Mary Miller, and Michael Farris Smith. Here's a link to it on Amazon.

NOTE: Also released this week was St. Louis Noir, which contains a story ("Deserted Cities of the Heart") by my friend and fellow SleuthSayer Paul D. Marks.

A pit stop in kudzu country

My story in Mississippi Noir is a bit different from the others. For one thing, it's the longest story in the book--10,000 words and 33 pages; also, it's a little more . . . optimistic, let's say, than some of the other stories. Kirkus Reviews, which spent awhile discussing the despair and poverty and heartache that accompany most of these tales, said, "And every now and again, there's a lucky soul who does manage to triumph over the trouble she gets herself into, like Anna in John M. Floyd's 'Pit Stop.'" Whether that's a good thing, in a book of noir fiction, is another matter--I'll leave that to the reader to decide. But I liked the story, and had great fun writing it. (Not that it matters, I guess, but I liked all the other stories too--and as always, it was fun to meet the other authors, at the launch on Thursday.)

A quick word about my story: Its original title was "Route 25," because the entire piece is set in a section of that highway, between Jackson and the town of Starkville, some 120 miles to the northeast. Later, though, after it was accepted for inclusion in the book, I was told that since each story would reflect a different region, and since State Highway 25 would be listed in the Table of Contents as the area where my story takes place, I was asked if I could come up with another title for the story itself. I decided on "Pit Stop" because it has a double meaning: most of the action takes place near a gas-station/convenience-store on the road trip that the main characters take, and the plot also involves an abandoned well. And yes, somebody winds up in the well. I don't think that's revealing too much; according to Anton Chekhov, "If you show the reader a gun in Act 1, it better go off in Act 3."

A good story is hard to find

My inspiration for this tale, by the way, came from the opening paragraph of one of my favorite shorts, "A Good Man Is Hard to Find," by Flannery O'Connor. That opening features a man from Atlanta proposing a family road trip to his mother, who tells him they shouldn't be traveling in that direction (Florida) because of a killer that the newspaper says is on the loose there. Immediately after finishing that paragraph, any savvy reader knows that before the end of the story those poor vacationers will almost certainly meet up with the killer. I think it's a great example of the art of foreshadowing. Or maybe of setting expectations.

I try to do the same kind of thing in this story. Here's the situation, in "Pit Stop": a young lady and her date are headed out on a two-hour drive to a college football game, after which they plan to stop and hike awhile in the autumn countryside. They already know that the section of highway they'll be traveling is the site of several recent killings, and that whoever committed the murders is still at large--but they're young and they're invincible, right? Well, as you might imagine, they meet some unexpected folks along the way, and things quickly grow complicated.

The book's first review on Amazon, received a week ago, says "Pit Stop" is a fun and satisfying read, and "is a story that likely would have warmed the heart of Alfred Hitchcock." That extremely kind statement warms my heart as well.

I recently spoke with a fellow writer who said one of the items on her Bucket List was to someday appear in Akashic's noir series. I had hoped that one day I would also, and I'm truly grateful for this opportunity.

Strangely enough, I had already sampled a few of the books in the series, including New Jersey Noir and Los Angeles Noir, and I enjoyed them. (Have any of you read some of these?) This one, like the others, seems to have a little something for every taste. Greg Iles, author of The Bone Tree and a native of Natchez, says, in a cover blurb, "So kick back, pour yourself a drink, and find out whether Mississippi Noir may be the darkest of them all."

I hope it's also the most fun to read.


BY THE WAY, two weeks from today, on Saturday, August 20, my old friend and former SleuthSayer Elizabeth Zelvin will post a guest column in this time slot. I assure you that her post will be both shorter and better than this one, and I hope you'll join me in welcoming Liz that day. Meanwhile, best to all of you, in your writing AND your reading.
Posted by John Floyd at 00:01