To Whom It May Concern


by John Floyd
Having been a writer for several years now (and a reader for many more), I have accumulated what I suppose is an adequate vocabulary. The funny thing is, I sometimes find myself avoiding the use of perfectly good words when I write my stories, for the simple reason that they aren't often used in real life. Examples? Well, there are the many less-than-well-known-and-rarely-used suspects, words like myriad and plethora and beatific, etc.--but I'm talking mostly about words that are widely known but still not used much, in either fiction or in normal conversation. Here are three that come to mind: periodically, frankly, and whom.

What's wrong with "periodically"? Nothing--except that you seldom hear it or read it. Probably because it's just as easy to say "often" or "occasionally" or "regularly" or "now and then," which mean almost the same thing, minus the raised-eyebrow reactions. And what about "frankly"? Nothing wrong with it either, my dear, except that "honestly" seems to work better and sounds a little less pretentious. (I was once told that if you hear someone say "frankly," watch out, because whatever comes next is probably a lie.) But the one I most avoid--notice that I didn't say eschew--is "whom."

Yes, I know, there are many times when "whom" is correct, or at least grammatically correct, and it even sounds right, from time to time, as in For Whom the Bell Tolls. The problem is, it usually sounds--especially in dialogue--uppity and constipated. Anytime somebody says to me, on the phone, "To whom am I speaking?" I picture the late John Gielgud, or maybe Carson on Downton Abbey.

I don't need no steenking rules

Apparently there are others who (not whom) agree with me. Here are a few quotes and observations on that subject that I've found in my "how to write" books:

"Whom has long been perceived as formal verging on pompous . . . The rules for its proper use are obscure to many speakers, tempting them to drop whom into their speech whenever they want to sound posh."--Steven Pinker, A Sense of Style

"'Whom do you trust?' and 'Whom will it be?' are technically correct but painfully stilted. Go ahead and use Who do you trust? and Who will it be? except in the most formal of writing."--Bill Walsh, The Elephants of Style

"As far as I'm concerned, 'whom' is a word that was invented to make everyone sound like a butler."--author Calvin Trillin

"About half the people you hear spewing the word whom in everyday conversation don't really know how. They're bluffing. They know just enough to get it right sometimes--that's all they need to make themselves feel like big shots."--June Cassagrande, Grammar Snobs Are Great Big Meanies

"In almost all cases, you can use who instead of whom in conversation or in informal writing . . ."--Patricia T. O'Conner, Woe Is I

Going by the book

If you do choose to salute to the Grammar Police and perform your duty, when should "whom" be used?

The rule I like best, although I've forgotten where I first heard it, is simple. (Since any discussion of objects, participles, noun antecedents, subjective cases, etc., makes my head hurt, I prefer simple rules.) Here it is: 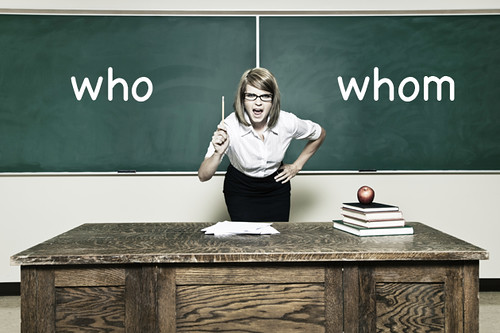 Sometimes it gets tricky. "I'll date whomever I want to date" is correct, but so is "I'll date whoever wants to go out with me." The second sentence requires the "who" form because it's the subject of another action within the sentence. But my dumb rule always works.

For whom the spell trolls

I still believe, though, that you should minimize using whom if your fiction is, like mine, more informal than formal. Can you imagine one of your characters--unless he or she is an English professor--saying the following?

"Guess with whom I had a date last night."
"It's not what you know, it's whom you know."
"Whom are you going to believe, him or me?"

I listed a quote earlier from A Sense of Style. That book also mentioned the comic strip Mother Goose and Grimm, which showed an owl in a tree calling "Whom!" and a raccoon on the ground replying "Show-off!" 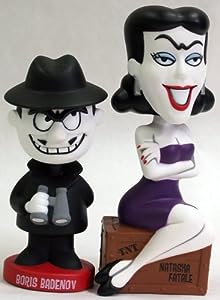 And this excerpt from an old Rocky and Bullwinkle cartoon:

William Safire, author of the New York Times's "On Language" column, once said, "Let tomorrow's people decide who they want to be president." According to Steven Pinker, if Safire can misuse who/whom in this way, so can he.

What's your opinion, on all this? Do you, like Natasha, use whom at every opportunity? Do you avoid it like Kryptonite? Do you often find, or have you ever found, the need to use whom in a piece of fictional dialogue? Fictional narrative? Have you ever substituted who even though you knew it wasn't grammatically correct? Is your head beginning to hurt too?

Whatever your views, I wish good luck to all of you who write stories, and to all of those for whom they are written.
Posted by John Floyd at 00:01

Email ThisBlogThis!Share to TwitterShare to FacebookShare to Pinterest
Labels: Floyd, grammar, style, who versus whom