House for Sale! Not Haunted!

“First time on the market in over 50 years! Perched on a hill up a long drive way with sweeping views sits this 4 bedroom 3 bath Spanish Revival home on a large lot. Features include grand entrance with a step down living room with serene views, formal dining room, library/study, large kitchen, and a ballroom with bar on the third floor. Three car garage at street level and two car garage at the end of the driveway. Waiting for that special person looking for a wonderful opportunity to remodel or develop,” says the agent’s listing, which you can find at: http://www.bhhscalifornia.com/listing-detail/2475-glendower-place-los-angeles-ca-90027_1843846

The one thing that the agent forgot to mention in her description is the murder-suicide and attempted murder committed here on December 6, 1959. No biggie. So it definitely might take a “special person” to buy this joint. 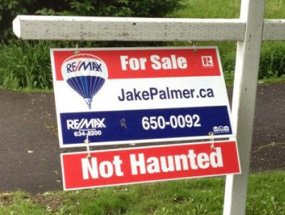 According to CA law, I believe the crimes committed in this house need to be disclosed. When my wife and I were looking for our current house several years ago, one of the houses we liked a lot had had a suicide in it and that was disclosed to us. It wasn’t a deal breaker – no, that was the fact that the house needed work and the seller wouldn’t come down, considering the amount of work needed. But one does think about how it would be cozying up in the family room, watching The Haunting and knowing that someone had shot themselves right there. So when that popcorn you were eating is suddenly all gone you might wonder “who” ate it…

But this Los Feliz house (a really great neighborhood by the way) has something on the house we were looking at, a murder and a suicide instead of just a mere suicide. And an attempted murder. I guess today we’d call the killer a family annihilator or at least a family annihilator wanna-be, though I don’t know if the term was in use in 1959.

The house’s architecture is Spanish Revival, similar to the house used in Double Indemnity and the house I grew up in. And my favorite style of home architecture.

Apparently the house is frozen in time, a relic of 1959, when Dr. Harold Perelson hit his sleeping wife with a ball-peen hammer till she was dead. He then attacked his daughter Judye, but his bad aim caused her to wake up and run into her parents’ bedroom. Finding her mother dead, she ran out of the house screaming, until the neighbors called the police. The commotion caused the Perelson’s two younger sons to wake up but the good doctor gently told them they were having a nightmare and to go back to bed... but not as bad a nightmare as they probably had when they woke up and found their mother bludgeoned to death.

A neighbor entered the house to see Perelson taking a handful of sleeping pills, lay down on Judye’s bed and count sheep – or maybe dead bodies – while waiting for death, which came before the police. Nobody knows what motivated the good doctor to do what he did. People speculate that he was depressed or had business setbacks, but no one knows for sure.

The house was sold in a 1960 probate sale and the son of the buyer died just this last year. Supposedly another family rented the house right after the sale, adding a Christmas tree and presents, but fled a year later. Since then, no one lived in it except maybe a squatter here or there. But word is, because of the murders, they never stayed long. And the Christmas tree, old and untouched, and presents are still there and supposedly have been all this time.

Rudy Enriquez, the recently deceased son of the home’s buyer, said he used the house for storage but not much else. He could have given it to me, I would have loved it.

Word is that the house is a teardown, both because of its history and because it’s falling apart and in such great disrepair after so many decades. But one has to wonder, does the bad energy of that fateful night linger? And will it linger on this spot if the house is torn down? Oooooh!

Curious Lookie-Loos come up the narrow street and bother the neighbors, parking in their driveways or just using them to turn around. They park and get over the chain-link fence and look around. The gawkers would bother me more than the “ghosts”.

Some people think haunted houses increase a home’s value. Others wouldn’t’ touch them. But as silly as it may sound to some, even “haunted” houses have to be disclosed these days. 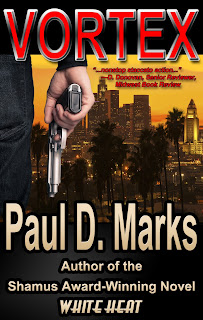 Personally, I love Los Feliz. It’s a beautiful neighborhood filled with tons of gorgeous Spanish Revival homes, where my cousins and aunt and uncle lived in a cool Spanish style house, pretty close to this murder house. So, we’d hear stories…about the bogeyman and worse! And when my wife and I were looking for our current house we looked in Los Feliz, but ultimately decided we wanted to be farther out of the city, so where we live now the local little paper has things like saddle stolen on their crime blotter page instead of family bludgeoned to death every other day. Los Feliz is where the main characters in my novel Vortex live. And there’s a really cool bridge there, the Shakespeare Bridge, that is part of a very intense scene.

So, if you happen to have 2.7 mil handy, make an offer. If I could afford it I’d put a down payment down right now. And I wouldn’t tear the house down either.

And here’s how the ad should read if there really was truth in advertising:

“Planning that perfect murder? Don’t mess up a virgin house. Famous Murder-Suicide house on the market for first time in over 50 years. Haunted by ghosts of past murders. Perfect for you: Features soundproof walls. Large kitchen with butcher block, perfect for chopping. Formal dining room with wood beams for hanging things from. Ball-peen hammer room on the third floor. Stainmaster carpet throughout. Only two people died here. Three got away. You might too...”

(Hat Tip to Leigh Lundin for suggesting this piece, though not the tone of it. And I hope I haven’t offended anyone with my gallows humor. ’Cause so many are offended so easily these days…)