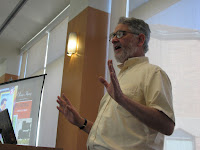 Last year I was teaching a course at the university where I work and since it was what is known as "writing intensive" I invited a representative from the Writing Center to come talk to the class.  The Writing Center (now part of the library's Research and Writing Studio) is a place where students get assistance from specially-trained students on anything from creating a thesis statement to citing a term paper properly.

The writing coach (a pro, by the way, not one of the student peers) asked all of us to name our pet peeves in terms of grammar mistakes.  What bugs you when you see it in writing?


I had several to suggest, and that got me paying close attention to what was handed in as the course progressed.  In fact, I became so invested  I told the students they could get up to three extra credit points on the final paper, simply by not making the three mistakes that irritated me the most.  They didn't have to use these elements correctly; they just had to avoid using them wrong.

Below is a list of my current complaints.  You will find the Evil Three at the top of the list.  Please add your own peeves in the comments.

Semicolon.  In Donald E. Westlake's wonderful posthumous book of essays, The Getaway Car, he offers a spirited defense of the poor abused semicolon.  If you don't like it, by all means, don't use it, but use a period instead, not a comma.  Thank you.

Lose/Loose.  This is one of those Spellcheck Curses.  People seem to lose the ability to spell lose.

Poorly/Badly.  I don't have a rule about this one.  It's just a mess.  I feel poorly usually means I am sick.  I feel badly could mean I regret or My fingers don't work.  Any thoughts?

Around/About.  I just noticed this one this week, although I have certainly heard it before.  An otherwise eloquent speaker kept saying things like "We talked around the subjects of blah, blah..."  This is fresh academic jargon for broadly discussed.  Sorry; talked around X  means avoided the subject of X.


Times Less Than.  This one bugs me so much that i can tell you exactly where I was the first time I saw it.  It was an ad for cosmetics in a grocery store.  Here's the deal: if the sales price is  three times less than $40, it is minus $80.  You can find webpages claiming "times less than' is acceptable, but you can also find websites claiming Elvis Presley is married to Bigfoot.  Try this page for my side.

And by the way: a recent article in a prominent scholarly journal told us what we all suspected; People who correct each other's grammar are jerks.  Feel free to dive into the comments and join me in the jerk pool.

P.S.  All the typos and apparent errors you find in this column are placed there deliberately.  At least, you can't prove otherwise.