[A] pastiche is a serious and sincere imitation in the exact manner of the original author.

A picnic is more than eating a meal, it is a pleasurable sate of mind.

Last week, with the marriage of our younger son Colin just behind us, we waved good-by to family guests, turned on our heels, sorted out the guest room, and welcomed Francis (Mike) Nevins into our home for a three day visit. I first met Mike, an emeritus professor at St. Louis University Law School, author and scholar of all things Ellery Queen, back in 2005 at the Ellery Queen Centennial symposium hosted by EQMM. Since that time we have shared a few meals together, but never a prolonged visit. This time Mike was passing through Washington, D.C. enroute to Massachusetts to attend a memorial service for Rose Koppel Dannay, the third (and last) wife of Frederic Dannay, whom we all know as one-half of the Ellery Queen writing duo. 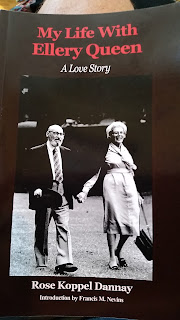 In his own blog First You Write, Mike has summed up the importance of Rose Dannay’s influence on Frederic Dannay succinctly: “It’s not going too far to say that Rose saved Fred’s life.” Dannay’s second wife had just died when he met Rose. Mike writes that at that meeting Rose found a broken man winding down his life, and Mike concludes that “[t]hat is what Rose saved him from.” Their marriage endured until his death, over the Labor Day weekend of 1982, at age 76.

In her later years Rose Dannay penned a memoir, originally privately published, entitled My Life with Ellery Queen chronicling her years with Dannay. The slim volume necessarily offers little insight into the early years of Ellery Queen, or into the life of Manfred B. Lee, the other half of the Queen duo, since Lee was gone by the time Rose entered Dannay’s life. But the book, which I read during Mike’s visit, is nonetheless a rich narrative of Dannay’s final years. And -- lucky us -- while the book has long been unavailable to the general public, within days all of that will change when it is re-issued together with a new (and lengthy) introduction written by Mike.

But enough of the past (well, sort of). One of the great things about the on-line age in which we live is the ease with which we can each reach out and connect with those whose interests we share. Those of us who are still Ellery Queen fans may be few in number, but among us the interest in Queen runs deep. And Mike’s short swing through Washington, D.C. afforded an opportunity for three of us to spend a great evening together in my backyard.

I knew of Josh Pachter before last week but we had never met, even though he lives in nearby Herndon, Virginia and teaches communications and human studies at equally nearby Northern Virginia Community College (where he is also an Assistant Dean). Josh is, however, an old friend of Mike’s and that proved the only catalyst needed in order to complete a "three musketeer" gathering. All three of us have not only read and studied the works of Ellery Queen, we have also each contributed our own works featuring, or inspired by Ellery.

Josh had his first short story published in EQMM at the tender age of 16, and has authored several Ellery Queen parodies, including "E.Q. Griffen Earns His Name" (EQMM December 1968), "E.Q. Griffen's Second Case" (EQMM May 1970) and "The German Cologne Mystery," co-written with Jon L. Breen and featuring Celery Green and his father, Inspector Wretched Green, (EQMM September/October 2005). Josh hints that he is working on yet another E.Q. Griffen story and hopes to share it with the reading world in 2018, the fiftieth anniversary of the publication of his first E.Q. Griffen escapade. His most recent work is the short-story collection The Tree of Life (Wildside Press, 2015), available in paperback and (as The Mahboob Chaudri Mystery Megapack) in e-book format.

Mike Nevins has authored four novels, many short stories, and a number of non-fiction works offering up his take on mysteries and mystery writers. He has edited countless mystery anthologies and has won two Edgar awards, one for Royal Bloodlines, his first biography of Frederic Dannay and Manfred B. Lee, and the second for First You Dream, Then You Die, focusing on the literature of Cornell Woolrich. And Mike is also famous, among other things, for his seminal Ellery Queen pastiche, “Open Letter to Survivors,” (EQMM May, 1972), which spins its narrative riff from the following passage that appears in Ellery Queen’s Ten Days’ Wonder: “. . . there was the case of Adelina Monquieux, [Ellery’s] remarkable solution of which cannot be revealed before 1972 . . . .” In addition to his upcoming introduction included in the newly re-published Dannay biography referenced above, Mike’s next work, They Called the Shots, a retrospective on Hollywood directors he has known, will be published by Ramble House within the next few weeks. Among his most recent works is the 2013 retrospective Ellery Queen -- The Art of Detection, an updated and definitive companion piece to Royal Bloodlines.

Completing the trio assembled in my backyard on that Tuesday evening was, well, me. Accomplishments? Well, not all that many. But the Ellery Queen pastiches that I have authored include “The Book Case” (EQMM May, 2007), written in collaboration with my good friend Kurt Sercu, proprietor of Ellery Queen, a Website on Deduction, and featuring an elderly Ellery pulled from retirement to solve one last case involving many characters from earlier Queen novels, including principally the 1967 mystery Face to Face, “The Mad Hatter’s Riddle” (EQMM September/October, 2009), where characters from the 1938 Queen novel The Four of Hearts, reunite for the filming of an episode of the 1975 NBC Ellery Queen television series, and “Literally Dead” (EQMM December 2013), featuring a return, once again, to Wrightsville.

So the dinner cast was set and the evening was predictably great.

But let’s be greedy. Who else could have been added to make that back yard dinner even better? Well my list of wished-for attendees would include the following:

Kurt Sercu, my friend, erstwhile collaborator and the proprietor of the aforementioned Ellery Queen website where, incidentally, you can read about all of the actual attendees in Kurt’s section discussing Ellery Queen pastiches and parodies. Kurt, who I first met on the internet in 2002, has three times made the trip across the pond from his native Belgium and knows my backyard well. Had he been here this time he could have shared stories with Josh in Flemish -- among his other accomplishments, Josh is fluent and has frequently translated mysteries from Dutch to English.

Joe Goodrich, author of Blood Relations, the collection of the 1940s correspondence between Frederic Dannay and Manfred B. Lee, and also the author of the play Calamity Town, which had a sneak preview for two days in Claremont, New Hampshire in 2013 and will have its official world premier at the Vertigo Theatre, Calgary, Canada next year.  (It will play there from January 23 through February 21, 2016.)

Doug Greene, professor emeritus at Virginia Commonwealth University, Ellery Queen scholar, proprietor of Crippin and  Landru publications, and publisher of both The Tragedy of Errors, collecting previously unpublished Queen stories and essays, and featuring the outline of what would have been the final Ellery Queen mystery, and The Adventure of the Murdered Moths and Other Radio Mysteries, a 2005 collection of previously-unpublished Ellery Queen radio plays. Doug just had a birthday, so we would have added a cake to the menu!

John L. Breen, emeritus book review editor for EQMM, who has twice been awarded the Edgar Allan Poe Award, first in 1982 for What About Murder?: A Guide to Books About Mystery and Detective Fiction, and then in 1985, for Novel Verdicts: A Guide to Courtroom Fiction. He has written several novels and over 100 short stories, including several Ellery Queen pastiches and parodies, one of which, “The Adventure of the Disoriented Detective,” is available on Kurt’s website and another of which, “The German Cologne Mystery,” (see above) was co-authored with Josh.

Arthur Vidro, yet another Queen scholar, author and publisher of (Give Me That) Old-Time Detection (a wonderful periodical dependably offering up Ellery Queen nuggets).  Arthur was the director of the first presentation of Joe Goodrich’s theatrical version of Calamity Town, and appeared in the production in a supporting role.  He is also the literary detective who (to my mind) has definitively established that Ellery Queen’s Wrightsville is modeled after Arthur’s hometown -- Claremont, New Hampshire.  Arthur has his own short Queen pastiche on-line on the EQMM website.  It can be read here.

Each of these folks I have had the honor to meet and get to know in person over the years. And to the list I would add at least one more Ellery Queen expert and aficionado -- mystery writer and biographer Jeffrey A. Marks, an author who, thus far, I have met only on the internet. In addition to his many works, including his mystery series featuring Ulysses S. Grant, Jeff has penned biographies of famous mystery writers including Earl Stanley Gardner and Anthony Boucher.  His latest project?  Well, in the next year -- or perhaps a bit more -- Jeff will be releasing his new, and I will bet definitive, biography of the lives of Frederic Dannay and Manfred B. Lee.   (Working title -- The American Detective Story.)

Now THAT would have been a party!

(Most of the links and some of the graphics, above, are courtesy of Kurt's website Ellery Queen -- A Website on Deduction.  Always worth a visit, folks!)
Posted by Dale Andrews at 00:01