In my last post, I wrote about the robbery of one Tovrea wife: Della Tovrea, wife of E.A. Tovrea, who lived in the Tovrea Mansion in Phoenix.

Della died from illness in 1969, but another Tovrea wife would be murdered while in her sleep.

E.A. was long dead by this time, of course.  And his son Edward had already fought in a war, been married, had children and divorced before he met Arkansas-born Jeanne Gunter, a pretty woman who had taken a job as a cocktail waitress when she first arrived in The Valley but had marshalled her forces and become a successful realtor by the time she met Edward. 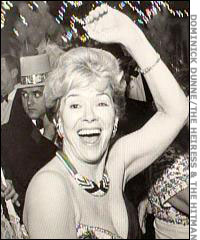 The two were married about a year later, in 1973, and all seemed perfect from the outside: the couple enjoyed connubial bliss, while Valley society welcomed Jeanne with open arms and found her a person who fit right into the social set.

But, the kids weren't happy.  Edward Tovrea Jr., better known as "Hap," and his sisters, Georgia and Priscilla, considered their father's new wife to be a gold-digger who belonged behind the counter at a cocktail lounge, rather than hobnobbing with their dad.

Roughly a decade after Ed Sr. married Jeanne, his health began to decline.  Friends say that she was with him constantly until he died in 1983.  Hap and his sisters each received $200,000 upon their father's death.  This was distributed in $1,500 monthly payments to each adult child.  But, Hap and his sisters were unhappy that their father had left the bulk of his $8 million estate -- including an expensive home in Paradise Valley (not the Tovrea Mansion in Phoenix), as well as an expensive art collection -- to a woman they considered a gold-digger.  A woman who continued her high-society life after what others termed "a suitable period of mourning" their father's death.


Around 7:00 pm on April Fools Day of 1988, Jeanne spoke with her sister by phone, explaining that she had been preparing invitations for a society party she planned to host.  Six hours later, she would be dead: shot in the head five times while she lay in bed.  It looked to police as if she had been shot while sleeping; there were no signs of struggle.


Interestingly, the killer had entered through a kitchen window -- touted as the one point that permitted an intruder to disarm the alarm system on entry.  Evidence then indicated he made a beeline straight to Jeanne's bedroom, as if he were familiar with the house. Though her costume jewelry had been strewn about the bedroom, and Jeanne's purse with her credit cards and ID was missing, expensive jewelry in the next room lay undisturbed.  That undisturbed jewelry, and one other indication marred the look of an inside job: the killer had evidently tripped the burglar alarm on exit, when he opened the Arcadia door to make his escape.

Added to this, among the finger prints found at the scene, 18 prints had been left by a single individual, including some on the kitchen window where the killer had entered.  Those prints did not match anyone in the family, or any known associates of Jeanne.


As investigators worked the case, they also discovered that Jeanne had evidently been the victim of a stalker during the final weeks of her life.  She had been contacted by a certain Gordon Phillips, who claimed he was a freelancer for Time-Life and wanted to interview her, about her late husband's POW experiences, for Time magazine.

Ed senior had spent time as a POW during the Second World War, and was known as a bit of a hero because of this.  When Jeanne had Phillips checked out, however, she learned that Time-Life had no Gordon Phillips working for them, nor had they engaged anyone to interview her about such a story.

When "Phillips" called again, she told him she could not help him with the story.  This didn't keep him from pestering her with phone calls, though.  When she didn't answer his calls, he began leaving messages, including one the police heard on her answering machine: "Yes, Jeanne, this is Gordon Phillips, and I have some information for you."

Police tried to find a connection between the man calling himself Gordon Phillips, those 18 unknown finger prints, and the murder.  They wouldn't make the connection until 1988, however.

In two weeks, I'll let you know what they found out.