The Park Is Open


by John Floyd
As you probably know, this is a mystery blog. I know that too--after all, I work here. But today I'd like to veer off the mystery/crime/suspense path and down into the cross-genre weeds, and focus on suspense fiction only. (One out of three ain't bad, right?) I promise I'll get back on track next time.

A few weeks ago one of our sons and I went to see Jurassic World. Not on the day of its release; this was a week or so after its debut. I'm timing-challenged, but I do know better than to go see any movie rated less than R on its opening day. I like kids, but I also like to be able to hear the movie.

This film reminded me of my recent SleuthSayers column on movie taglines. The tagline for Jurassic World, according to its trailer on YouTube, is The park is open. I like that. It brought back, as it should have, memories of the excellent film Spielberg directed in 1993, the one that was "65 million years in the making." And although the word "sequel" is used a little loosely these days, this was most definitely a followup to the first movie. It pretty much ignores the second and third installments, but the original theme park is mentioned throughout this film, and is even seen via Jurassic Park logos on T-shirts and Jeep doors, and long-ago characters like founder John Hammond are mentioned as well. The old visitor's center, now abandoned and crumbling, even makes an appearance. As expected, the new tourist trap--an unfortunately accurate term, considering what happens--is bigger and better, as are the dinosaurs inside its walls. But they are just as deadly and unpredictable as before.

I truly enjoyed this movie. It had its faults, that's for sure, but it also had everything it takes to capture and hold my interest: a good premise, engaging characters, a lot of action, (fairly) sharp dialogue, humor even in tense situations (there are many of those), and a satisfying ending. 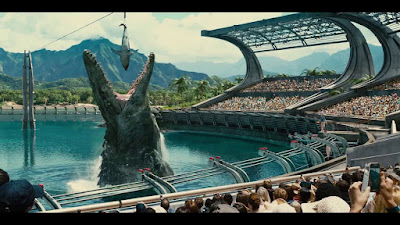 - A score by Lost composer Michael Giacchino, and the occasional use of John Williams's original music. Some might say this is too much of a reminder, but in this case it works, since almost everyone has either seen Jurassic Park or has heard that theme, or both. It's comfortably familiar.

- Two new dinosaurs (the super-intelligent, super-evil Indominus Rex--one reviewer labeled it a Holyshitasaurus--and a shark-gobbling leviathan called a Mosasaurus) that make the T-Rex look like a teddy bear.

- A bad-boy, rough-around-the-edges raptorwhisperer hero who is shown to be both brave and compassionate, in an early scene where he rescues a colleague.

- A villain who sincerely thinks he's in the right even if he's not--they're always the best kind--and who gets what's coming to him, even if it is a predictable end. There's also an unpleasant-at-first character who later turns from the dark side and is not only won over by the hero, she becomes the heroine--how's that for a character arc?

- Nonstop action. This is one of those films where wetting your pants almost seems a better choice than taking a restroom break and missing something. - Two lead characters (Chris Pratt and Bryce Dallas Howard) who are among the most appealing actors in Hollywood right now. It's been rumored that Pratt will play Indiana Jones in the next installment of that series, and Howard is Opie's daughter, so how could she not be likable?

- [Possible spoiler:] An ending in which the real villain (the genetically-designed behemoth that goes on a rampage) is finally dispatched by a combination of (1) a clever last-minute brainstorm and (2) the only thing on the island more fearsome than it is. You'll see what I mean.

The only downsides were maybe too many subplots, some cartoonish characters, and a silly scene where the hero takes a motorcycle ride alongside the normally deadly velociraptors . . . but I can live with that.

NOTE 1: As in the first movie, two of the visitors to the park are kids who are related to the Big Boss (Richard Attenborough in the original, Bryce Howard in this one, both of whom for some reason dress only in white). Here, in a great example of showing-vs.-telling, viewers find out how much danger the kids are really in when their assigned "guardian-for-the-day" gets eaten in spectacular fashion: she is snatched off the ground by flying pterodactyls, gets passed from one to another in mid-air, then is dropped into a water tank and devoured by a creature as big as a passenger train. Who would've thought babysitters deserve hazardous duty pay?

It's a monster mash

So that's my report. In my opinion, Jurassic World was not as good as Jurassic Park but it was better than Jurassic Park III, and it was about equal to Jurassic Park II (The Lost World). Have any of you seen the new one? Did anybody like it as much as I did? If you're looking for a summer blockbuster that's great fun, gets the juices flowing, and doesn't overburden your brain cells, I think you might. Apparently a lot of paying customers have, so far.

You bet jurassican.
Posted by John Floyd at 00:01