Not Reading Can Be A Pain 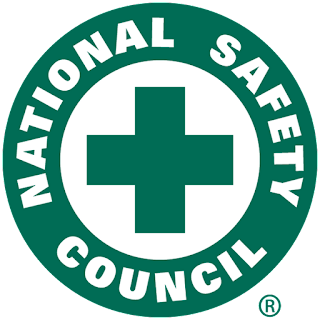 Toward the end of May, I seem to recall receiving a letter with the return address of the National Safety Council on it, complete with the circular seal you see here.

As I recall things: I thought it was another one of those "Watch your kids around water!" notices that get sent out, like confetti at a ticker-tape parade, around Phoenix during the summer.

I seem to further recall tearing the envelope in two, unopened, and tossing it in the garbage can. After all, I taught all three of my kids not only how to swim, but also "safe swim defense" techniques.  And, I figure I did a good job, having earned Swimming and Life Saving Merit Badges back in my youth, along with the BSA Mile Swim Award, and having served as a scout-swimmer in Special Forces during my army days.  I was also a Swimming Merit Badge councilor for the Boy Scouts for several years after I left the army.

So, hey, who needs to read a silly letter from the National Safety Council?  Right?

About two weeks ago, however, I got a tremendous surprise while driving to work.

A police car was pacing me in the left lane, its hood just a little ahead of mine.  (This isn't what surprise me; I've driven alongside police cars before.)  And, when the left lane gave out, I slowed so he could pull into the right lane ahead of me.  He slowed further, so I did too -- just before thinking about what my friend on the Scottsdale PD had told me about not waving to police officers, or acting too friendly, because this is the sort of behavior bad guys think will put cops off their scent.  Hence, in an officer's view, my behavior might be considered suspicious.

Consequently, when the squad car went through the next intersection on a yellow light, but I stopped (I was behind him by that time), I wasn't surprised to watch it turn into a parking lot up ahead, then nose back out toward the street as if waiting for me.  Sure enough, when I passed, he pulled out and followed me.

No problem.  I'm one of the good guys.  Nothing to worry about; I wasn't even speeding.

At the next light he hit his overhead lights and pulled me over.  I was a little surprised, but not terribly so: I know there are enough traffic regulations on the books that an officer can pull over just about anyone, at anytime, and with perfectly legitimate legal cause -- This is actually a useful law enforcement tool, and I don't resent it in the least.  I pulled over, turned down the radio, got my license, registration and proof of insurance out, and waited for him to walk up to my window.

After examining my documentation, the officer asked, "Mr. Hill, do you know why I pulled you over?"

"Actually, sir, I pulled you over because, when I ran your plates, it came back that you have a suspended license."

I was shocked!  ME?  A suspended license?

"Really?  Why is my license suspended?  Are you sure you got the right guy?" I asked.  I didn't have to ask if he was kidding; his demeanor made it clear that he wasn't.

He nodded.  "Wait here, please."  He walked back to his car with my papers.

I sat there, puzzled, until he came back and asked me to step out of the car.  Why does he want me out of the car? I wondered.  Is he going to arrest me for some reason?  This was really getting bizarre.

Once on the sidewalk with the officer, I saw him clip my license to the front of his shirt.  I knew then, I was in trouble.  For the first time, I began to suspect this wasn't just a case of someone having made a mistake that we could iron out in the next ten or twenty minutes.  I asked, "Can you tell me why my license is suspended?  I mean, I had no idea."

He shook his head, and now it was his turn to look a bit surprised.  "No.  I can't.  It just says your license is suspended.  For some reason, it doesn't say why."

I surmised that he was talking about his on-board computer.  I realized he wasn't sure why it didn't tell him the reason for my license suspension, and that this bothered him.  I also began to notice how young he was, and that he didn't have any stripes on his uniform.

"Do you have any idea?" he asked.  "Did you get any traffic tickets lately?"

He looked troubled.  "Well, if you have anything in the car that you need, please get it out.  We're going to have to do an inventory, and I don't want have to go through all your things.  It might embarrass you.  You seem like a nice guy."

"You're going to inventory my car?"

He nodded, looking a bit sheepish.  "I'm afraid we have to.  I have to impound your vehicle for thirty days, because you're driving on a suspended license.  You seem like a nice guy, and you're really being good about this, but I don't have a choice."

My eyebrows rose through my hairline.  "You're impounding my car?  For thirty days?  Really?"

I couldn't help laughing.  I'd once been on an A-team in the field, when we got into a tight position, and then two of the guys started punching each other out due to frayed nerves.  I started laughing then, too -- so hard that the warring parties quit fighting and came over to demand what I was laughing at.  But, our captain, the Team Leader, beat them to the punch, asking what was so funny.  I told him, "Nothing's funny, Skipper.  It'll take miracle to get us out of this thing, and you either have to laugh about it, or you gotta cry.  And I sure as hell ain't gonna cry about it!"

I was laughing for the same reason this time, too.

"I'm really sorry to do this to you," the young officer reiterated.  "You seem like a really nice guy."

"It's okay, officer.  I've got a friend on the Scottsdale PD, and another who used to be on the Phoenix department.  I know you're just doing your job.  No hard feelings, believe me.  I'm just embarrassed, that's all."

He was kind enough to get a trash bag from his car, so I could put all the items from my car into it.  I appreciated this, as I had recently-cleaned work shirts lying on the back seat at the time.

The young officer suggested I go to the Department of Motor Vehicles to find out why my license had been suspended.  When my son dropped me off there, I found out that I had to take a Defensive Driving class because of  my earlier ticket.  "But, I paid the fine," I said.  "I thought I had to either pay the fine, or take the class."

The woman behind the counter said, "New program.  Now ya' gotta do both."

"Yep.  We mailed you a letter at the end of May.  It told you that you had to take the class, or we'd suspend your license."

"I never got any letter."

"Still gotta take the class, if you want your license reinstated."

"Okay."  So, I paid three bucks for her to print out the letter they'd sent me in May.

When I went to the Defensive Driving course three days later, I learned that there really is a new program in Arizona, requiring almost anyone who gets a ticket to go to a defensive driving class -- even if they pay the fine.  This program is still pretty new; it was evidently enacted after I got my ticket, but I somehow fall into the category of person who has to take such a class.

And, there is a bit of reasoning behind the program.  Seems that, of the five most dangerous cities for driving (i.e. greatest number of traffic fatalities per annum) in the United States, Phoenix ranks No. 1, Mesa ranks No. 3, and Tucson ranks No. 5.  This program was enacted to help stem the tide of death on city streets in Arizona.  Now, the state alerts the MVD about offenders who pay the fine, but don't take a course.  The MVD then sends out a letter, saying that the offender must take a course as well, or risk suspension of his/her license.

And the kicker is:  The DMV sends these letters out, not in envelopes with official seals from the state, but (You guessed it!) in envelopes with the return address and circled green cross of the National Safety Council, because this is considered a safety measure.

Reporting from the rather humorous front lines of the legal system: this is Dixon Hill.