There's only one rule

At Left Coast Crime in Portland back in February I scooped a bunch of interesting books off the swap table.  The first three, after a few paragraphs or a few chapters, wound up on the swap shelf at the library where I work.  But number four was definitely worth a read.

My first surprise was that How A Gunman Says Goodbye by Malcolm Mackay is actually the second book in his Glasgow Trilogy.  I figured I would give it a try without worrying about the first book, and that worked out fine.

But the second surprise came halfway through the book when I happened to glance back at this blog I wrote about Long Beach Bouchercon last year and discovered that one of the freebies I scooped up  there was the first book in Mackay's trilogy.  Maybe at this year's Bouchercon I'll get volume three.

At the center of the trilogy (said the man who has only read the second book) is Peter Jamieson, who runs a criminal organization in Glasgow, Scotland (mostly drugs).   He wants to take on one of his larger rivals but first he has to flatten Shug Francis, a pretender to his throne.  (Little fleas have lesser fleas to bite 'em...)

And that requires the help of Frank MacLeod, who may be as close as Jamieson has to a friend.  In Britain where guns are not as prevalent as here, criminal outfits may only have one or two hit men, and Frank is one of longstanding.

But longstanding is exactly the problem.  He's getting old and just had a hip replaced.  Can he still do the job?

Without giving away too much of the plot, it becomes clear he can't, and for the rest of the book everyone has to debate the question: how can a gunman be allowed to retire?  This is a guy who literally knows where all the bodies are buried.

That's enough about the plot.  What I want to talk about is something quite different. 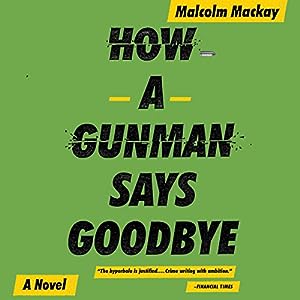 First of all, the book is in present tense.  Generally I don't like present tense fiction at all.  It gets annoying pretty quickly.

Second, the book is multiple point of view, and entirely POV.  I don't think there is so much as a "It was raining" that doesn't come strictly from inside the skull of one of the characters.  That's not itself a bad thing, but-- Well...

My new book, out this summer, is multiple point of view.  Originally I planned to write a lot of short chapters, alternating between viewpoints, but I realized some of the chapters might be only a few paragraphs long.  So I opted for longish chapters, with different viewpoints carefully separated by spaces.

Mackay scorns such things.  When the action gets going he is happy to follow a paragraph from A's point of view with one from B's POV, and then back again.  It can be confusing.  There were a few points where I couldn't tell who's eyes I was looking through.

Here, for instance, is a meeting between a cop and a killer:

Fisher's gesturing for Frank to take a seat at the table.  To his relief, Frank does.  If this was a fix and he was going to kill him, it would have happened by now.

'Can I get you a cup of tea, Frank?" he's asking.  Being friendly with this old murdering bastard.

He can see that Fisher's making an effort.  He can see the strain that it's putting on the cop, too...

Highly unusual way of writing.  But - and here's my whole point - it all works.  Those other three books that I dumped on the swap table were much more traditional narratives, easier to follow, but they didn't keep me glued to the page.  Mackay did.

It turns out that all those writers who helpfully provided us with Ten Rules For Writing Great Fiction were lying.  The fact is there's only one rule: Keep the reader turning pages.  Mackay does.


One more thing.  Last year I wrote about one way to deal with cliches in your writing.  Essentially, when you spot one you back up and choose a different direction.  It feels like Mackay does that.

You see, there are two hitmen in the book.  Calum is younger, an up-and-comer.  Naturally he is jealous of the more senior Frank and looking for ways to undermine and replace him--

That's the cliche and Mackay dodges it.  His Calum is a free-lancer being reluctantly dragged into Jamieson's orgaization, who would much prefer for Frank to stay on as gunman-in-chief.  So his problem is: does he lie to protect the other man?

I recommend the Glasgow Trilogy, but you might want to start with the first book.  But that's not a rule.  There's only one rule.
Posted by Robert Lopresti at 00:00