by David Edgerley Gates
A while back, I wrote a story and submitted it to HITCHCOCK. Not long after, a bomb went off at the finish line of the Boston Marathon. It was one of those WTF moments, because it didn't make any sense. (Of course, you could say that terrorist acts, by definition, don't make any sense, and you wouldn't get an argument from me.) The weird thing was that inside of 48 hours, the suspects in the bombing were ID'd as Chechens. My story began with a hit on a guy in a car. The shooters were hired guns, contract killers. They were Chechen gangsters, brought in soft, for the one job.

Now, my story didn't have anything to do with terrorism. It was about money, and closing a loop. Eliminating loose ends. But the coincidence bothered me, and I dropped a note to Linda Landrigan at AHMM, and suggested it was kinda too close to home, as if I were exploiting a real-life event - that killed people - and better we revisited it, if and when she bought the story.

Next up, I touched base with my pal Michael Parnell, who at the time was living in Tbilisi, Georgia. Michael's pretty much my go-to guy for crazy feudal stuff in the Caucasus, and I wanted his input. Michael came back at me and agreed it was an odd juxtaposition. He said, Chechens make great heavies, for sure, but you got a lot to choose from, this neck of the woods. For openers, there's your Armenian rug guy who gets his thumb cut off - why not make the baddies Azeris, for example? Armenians and Azeris hate each other. And he threw some other stones in the pool, the Iranian Revolutionary Guard, the heroin traffic out of Afghanistan, the Moscow mafia moving in on the Georgian gangs. In the end, writers being jackdaws, attracted to shiny objects, I wound up writing a book called EXIT WOUNDS, and I'd happily credit Michael with giving me the background.

This is taking the long way around to the Tsarnaev verdict. Everybody's familiar with the essential narrative. An impressionable kid, led astray by his older brother, who'd been lured to the dark side of Islam. I have to comment that I have no patience at all with Fundamentalism, whether it's Born Again bible-thumpers, or extremist Orthodox Jews (like the guy who murdered Yitzhak Rabin), or ISIS thugs. My personal sympathy is that I'd like them out of the gene pool. Tsarnaev himself is sort of a poster boy, or at least that's the tack his defense took. There's something to this. The wars in Chechnya, for instance, drew in plenty of recruits from the disenchanted Soviet republics, border states along the southern perimeter, what the Russians like to call the Near Abroad, many of them with majority Moslem populations. Uzbeks, Kazakhs, Tajiks. All of them disaffected with native dictatorships, set up by Moscow. These are genuine grievances, and historic. Don't think people don't nurse old wounds.

This is, however, no alibi. You don't spray a crowd with shrapnel from pressure-cooker bombs. An eight-year-old kid died. What does he have to do with the Palestinians, or the invasion of Iraq? There's something truly screwy with making these things morally equivalent, or using them as an excuse. I don't get it. Terror tactics, the bombing of the King David hotel by the Irgun, say, or the IRA campaign in central London, in the 1990's, don't really work. They come back to haunt you. Prince Charles can shake hands with Gerry Adams, but it was the Irish, after all, who blew up Mountbatten.

I know inviting a conversation about the death penalty is asking for trouble. Abortion, capital punishment, and gun control seem like hot-button issues. (How gay marriage got sucked into this is beyond me.) But certain things seem obvious. The death penalty isn't a deterrent. It's unequally applied. Guys on Death Row turn out not to be guilty. DNA evidence, twenty years later. That's enough reason to get rid of it. Me, personally, I kind of like beheading, and hanging, and electrocution. They're all inhumane - you hang somebody, you have to stand on their shoulders, it doesn't break their neck, put some weight into it. This is, not to put too fine a point on it, society's revenge. You murder the social compact, you pay the price. And in this particular case, there's certain guilt. I'm sorry, but this isn't good enough. I might personally think Tsarnaev should be publicly disembowelled. That's not the issue.

Tsarnaev has no excuse, legally or morally. Like the old lawyer joke. Guy murders his parents, and then throws himself on the mercy of the court, because he's an orphan. I don't think so. You take responsibility. Diminished capacity doesn't work, not in this instance. There was a plan that required malice aforethought. They knew innocent people would die. They went ahead. Good lawyering can't explain this away. In fact, nobody even tried. We're left with the raw thing itself. The dead.

I think we deserve satisfaction. Socially. I think we deserve an endgame. I think we want payback. I think we're entitled to it. The death penalty speaks to this. You fry 'em, or they roll on the gurney. Retribution. But. I can't answer my own question. Are there people who deserve to die? Yeah, there are. Who makes the decision? I guess we all do, collectively. Which means the burden is ours. We choose this. Have we repaired the damage to the social compact? There's certainly something final about it, that a blood price is paid, and we're complicit. I don't know. If you take innocence off the table - if we can say, beyond doubt, that Tsarnaev is guilty - is justice served? I'm not convinced. 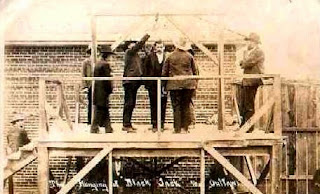