All right, Mr. Demille, I'm ready for my close-up


by Paul D. Marks
Or at least Los Angeles’ art deco city hall is ready for its close-up.

In its heyday, MGM’s slogan was more stars than there are in heaven. Well, there’s one movie location that’s starred in just about as many movies or TV shows as there are stars in heaven, Los Angeles’ City Hall.

From the time it was built in 1928 until today it can be seen in dozens, maybe hundreds, of movies and TV shows, including many crime films. One of my favorites is as the Daily Planet building in the 1950s TV series The Adventures of Superman with George Reeves.
Besides the exterior, the interior rotunda, as well as hallways, offices and the council chambers, have all been used in many movies/TV shows as well.

George E. Cryer, LA’s 43rd mayor, urged the residents of the city to build "a monument to the enterprise and progressiveness of the people of Los Angeles. Let us build a City Hall that will be a credit to the metropolis of the great West.”

LA’s new city hall was completed in 1928, with dedication on April 26th of that year. It has 32 floors and is 454 feet tall. The concrete used is made of sand that comes from each of California’s fifty eight counties and the water to mix it from each of the twenty-one Spanish missions in the state. Until 1964, it was the tallest building in LA, via the city charter.

Supposedly it made its film debut shortly after it was completed in Lon Chaney’s While the City Sleeps. And it’s been a star ever since.

Not only has it played itself in movies, but it’s doubled for the Vatican and New York City, and for a municipal building in San Francisco. In Flags of Our Fathers, director Clint Eastwood doubled up, using one side of City Hall for a building in Baltimore. He used a different side of the building for a scene of a rally in a different part of the country.

Since 1940 it has appeared on the LAPD’s badges. There’s even a scene in the 1960s version of Dragnet where a police officer from another state admires Joe Friday’s LAPD badge.
In 2006, there were about 50 shoots at LA’s city hall. Everything from movies to commercials to TV shows, causing workers to dodge the lights, cameras and action.

War of the Worlds (1953) – in this one city hall was blown to smithereens by invading Martians – well, okay, they blew up a miniature of it: 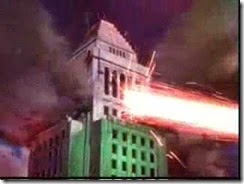 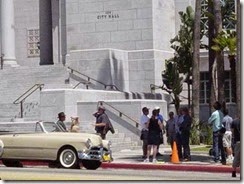 LA’s City Hall – interiors and/or exteriors – has also appeared in:
And this is only a tiny sampling of the movies and TV shows that have been shot at LA’s city hall, Los Angeles’ real movie star.

Hope to you see at the California Crime Writers Conference
(http://ccwconference.org ). June 6th and 7th.
I’ll be on the Thrills and Chills (Crafting the Thriller and Suspense Novel) panel, Saturday at 10:30am, along with Laurie Stevens (M), Doug Lyle, Diana Gould and Craig Buck.