Dinner With the Poe Folks

A couple of weeks ago, on Wednesday, April 29, Mystery Writers of America held its annual Edgar Awards ceremony in New York City to honor this year's nominees and to announce the winners. I should begin by stating two facts: (1) I was nominated, and (2) I didn't win.

But I attended, and I had a great time. As many of you know firsthand, the awards banquet is accompanied by several days of other events, parties, and receptions that encompass what has come to be known as Edgar Week. My wife Carolyn and I flew up that Monday morning and returned home Thursday night, and while we weren't able to attend every single function, we did show up for most of them. It was a unique opportunity for me to see some old writer friends and meet new ones. And to thank some magazine editors who have been extremely kind to me these past few years.

My only official duty all week was to participate in a panel of nominees Tuesday morning, the first event of an all-day Edgar (short for Edgar Allan Poe) "Symposium." The topic of our panel was "Crossing Genres," but it morphed quickly into a discussion of mystery subgenres, which was of course appropriate for a group of crime writers. Our moderator was Greg Herren, and my fellow panelists were Adam Sternbergh (nominated for Best First Novel), Kate Milford (up for Best Juvenile), and William Lashner (up for Best Paperback Original), all of whom did a great job. Kate, a delightful lady, turned out to be the only one of us four who would take home an Edgar this year, for Greenglass House (Clarion Books).

Later in the day more panels were featured, on settings, research, and the art of juggling a writing career and a day job. The sessions that I visited were well done, but I confess that I wandered in and out of them--like any other gathering of writers, most of the fun came from roaming around the hotel to chat with the other attendees--and my wife and I took advantage of the great weather to explore the city for a few hours. The afternoon ended with an interview of 2015 Grand Master Lois Duncan by Laura Lippman and an interview of co-Grand Master James Ellroy by Otto Penzler. I especially enjoyed listening to Ellroy--an interesting guy, to say the least. One of the most surprising things I learned about him was that he didn't like the film adaptation of his novel L.A. Confidential. (Personally--what do I know?--I thought it was one of the best crime movies ever.)

That night I attended an "Agents and Editors" party, where Mary Higgins Clark announced the winner of the annual award given in her name and where I finally met Otto Penzler--he and I had been corresponding via e-mail lately regarding one of my stories he's selected for an upcoming anthology. This was the only event, I believe, to which spouses/guests were not invited. I also got a chance to catch up a bit with editors Linda Landrigan and Janet Hutchings and former SleuthSayer Elizabeth Zelvin. On several occasions I heard Liz trying to explain to others that what I was speaking wasn't a foreign language, it was just Southern. 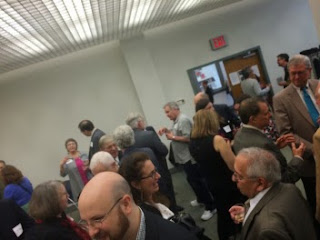 I was able to spend even more time with Linda, Janet, and Liz the following afternoon, at a cocktail party sponsored by Dell Magazines. Also in attendance at the Dell party were fellow SleuthSayers David Dean and Dale Andrews, as well as old friends Terrie Moran, Barry Zeman, Bill McCormick, and others. (In the lopsided photo above, I'm the guy in the green tie, talking with Barry.) It was a thrill for me to put faces to some of the names that I'd seen so often in the pages of AHMM and EQMM, to meet many of Linda's and Janet's colleagues at the magazines (Peter Kanter, Jackie Sherbow, Carol Demont, etc.), and to introduce everyone to my far better half. 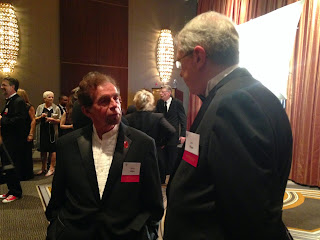 After a cab ride back to the hotel and a change of clothes, Carolyn and I went downstairs to the Edgar pre-ceremony reception. Much of our time there was spent getting photos taken and visiting with my competitor-in-the-Best-Short-Story-category Doug Allyn and his wife Eve. Doug has long been one of my favorite writers, and since my wife's maiden name is Allyn the two of them fell into a deep discussion about their family history while his wife and I discussed people who like to discuss their family history. I also had an opportunity to meet and visit awhile with my hero Stephen King, who was nominated for Best Novel this year. I'm sure SK was overjoyed to meet me, although he somehow forgot to ask me for my autograph. (The photo here is of Doug and me, with the Kingster in the background.) 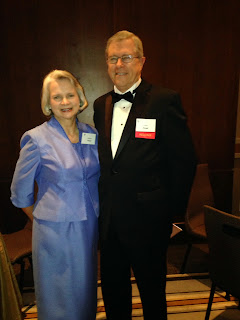 The banquet itself was great. Carolyn and I were seated at the table with Strand Magazine editors Andrew and Lamia Gulli, who were kind enough to have published the story that got me there, and I spent much of the meal listening to another tablemate, Mike (Francis M.) Nevins, tell fascinating tales about the old days of writing, publishing, and copyright law. When the steaks and desserts were finished and the award presentations rolled around, Doug and I lost out to Gillian Flynn, who in true Gone Girl fashion did not make an appearance that night. King won for Best Novel (Mr. Mercedes), which I thought was well deserved. A newfound friend, J. W. Ocker, won for Best Critical/Biographical, and later wrote a great piece about this year's awards ceremony. I think the most memorable quote I heard that evening came from R. L. Stine. He told the group that a lady in the lobby had said to him, "You look like R. L. Stine--no offense."

The next day we flew home--in my case older, poorer, and Edgarless but truly grateful to have been allowed to come to the festivities at all. It was my first time in NYC in years and the very first time Carolyn and I had been there together, and we'd had a wonderful stay in the company of talented and interesting people. I owe heartfelt thanks to the good folks at the Strand; to any of you who might've read and enjoyed my nominated story; and certainly to anyone who might've been involved in choosing my story, out of so many worthy contenders, to be one of the finalists.