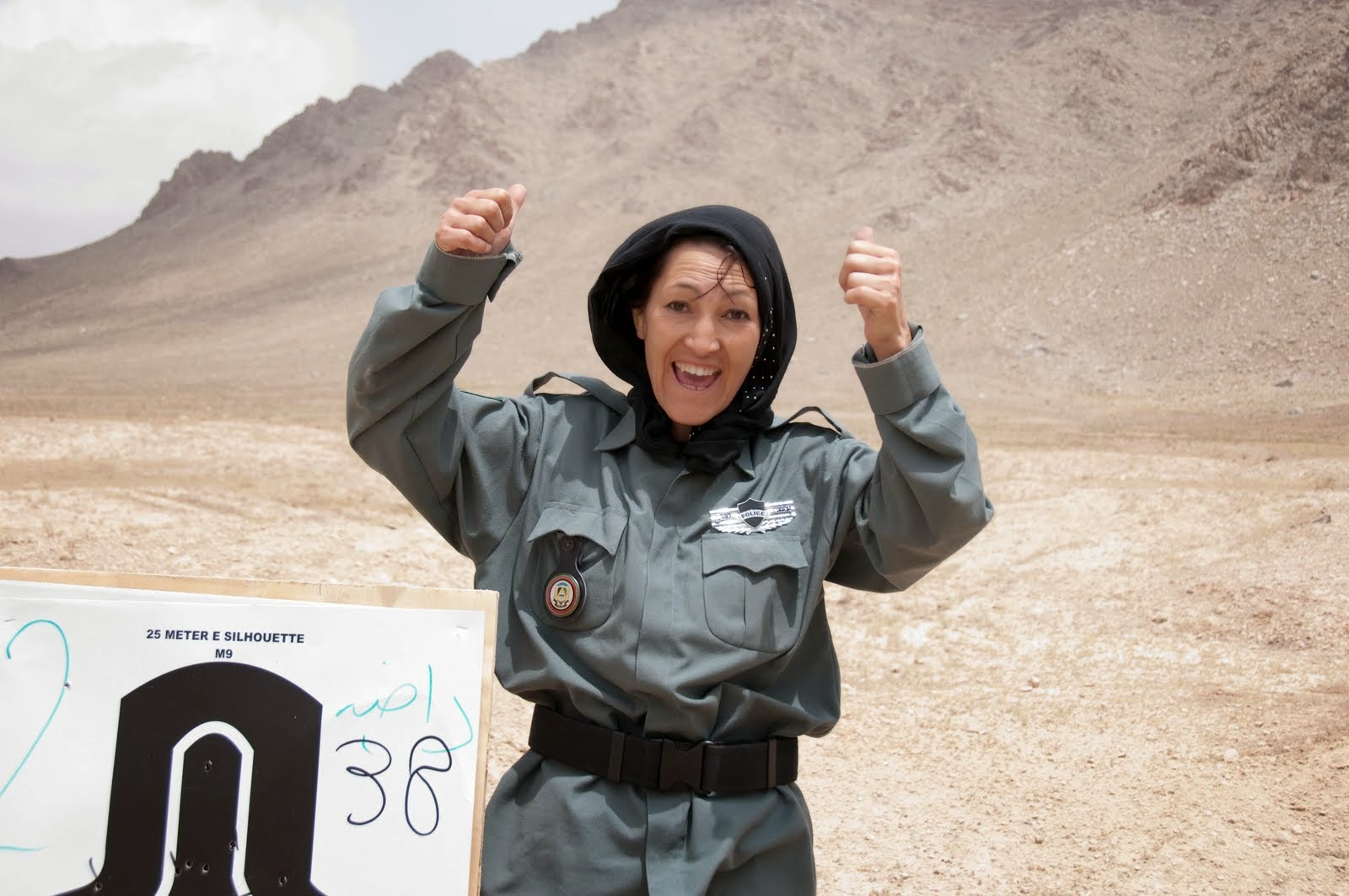 A recent article in the New York Times, about problems faced by Afghan police women, has me considering some problems I ran into when I worked in the army.

Since the problems mentioned in the news story are faced by women police officers, I felt the story fit into our framework here on SleuthSayers.

And, since I've dealt a bit with somewhat similar cross-cultural training problems -- trying to change the way that certain foreign troops viewed women -- I feel a deep sympathy with the women in the NY Times story, and for those striving valiantly to change cultural norms that can be quite harmful to women or even to men or children.  And I feel great concern about the difficulties encountered by the women in question.

The first time I ran into the dilemma of attempting to aid foreign males to change their views of females, I was a Spec-4 (Short for Specialist 4th Grade: the pay-grade equivalent of a corporal, but without any real leadership authority -- sort of a de facto Private 1st Class-'Plus') working for the 311th Military Intelligence Battalion, subordinate to the 101st Airborne Division (Air Assault).

Two Middle-Eastern officers came out to our field site, one day, to see how we conducted collection and analysis under field conditions.  Our Company Executive Officer (XO), a First Lieutenant, led them to the tent where the analysis element was working.  The XO had the female analyst come out and explain the procedure to the visiting officers.

I was along on this exercise, not really as an analyst, but rather as a truck driver and 'chogi boy'. However, because I was an Arabic Linguist, and had studied Arabic culture to an extent -- also learning much first-hand from listening to what my native-Arabic instructors said and by watching how they behaved -- I was not surprised when a quick look of frustrated anger flashed across both men's faces. Nor was I shocked, when their eyes almost immediately glazed over and they clearly quit paying attention to the female Spec-4 who was briefing them.

Finally, the Sergeant First Class who ran the "beans and bullets" of the unit on this exercise (and was also an Arabic linguist) blurted: "Sir, with all due respect: What did you expect?  You insulted them!  In their minds, your actions made it very clear that they were so unimportant, and such an unwelcome interruption, that you chose a 'non-person'  tell them what they wanted to know."  (Please note that such outbursts don't happen in most military units, but I've noticed that they are strangely common, and relatively well-tolerated, in some military intelligence units.)

Now please don't misunderstand why I chose to post this particular story.

I'm not saying that what happened between that Spec-4 and those two officers was right.  And, frankly, I wasn't happy about it either.  On the other hand, I think the XO (who was actually quite intelligent, and a good officer -- not a comment I've ever made lightly!) probably did get caught-out by a mistake in cross-cultural communications.

I say probably, because it depends on the objective he had in mind.  As I said: he was pretty bright.  So he might have done it on purpose.

Certainly, if his goal was to help those two officers get a good look at the technical aspects of how we did our work, then yes the XO made a mistake.  Because they didn't pay attention to the female specialist, so they didn't gain that knowledge.

But, if you think about it: probably one of the most important things those two foreign officers could learn about U.S. Army operations -- which their army could benefit from -- would be the manner in which we incorporate females into our operations.

What happened that day probably didn't change their minds about the role of females in society, but I think you'll agree that they did get a pretty big shock when that lieutenant brought out that female Spec-4 to brief them.

And they had a US Army captain tagging along with them, looking after them.  My hope is that they complained to him about what happened, and that he explained the way our army looked at females and their capabilities.  The way I figure it, if stuff like that kept happening to these two officers -- and the captain kept explaining -- they might have begun to get the message.  They might not have welcomed that message.  And it still might not have made much difference in their personal lives, because their outlook was undoubtedly deeply held and part of the culture they grew up in.  But at least it would be a start.  Maybe those guys got the shock of their lives, that day.  But, maybe it was the first step on their mental trip to learning a new way of thinking.

Working to change cultural norms is like that, in my opinion.  It's not something that can be accomplished overnight.  Sometimes not within a decade or more.  (Look at the changes in societal norms that our own nation has undergone since the 1960's, and compare this to the work that still needs to be done before certain members of our society will rest secure in unquestioned complete equality, for example.)  And, sometimes folks require a little "shock" to help them wake up and smell the coffee.

I used such a shock technique several years later, after I'd gotten into Special Forces.  That, however, is a story for another time, or this post will wind up so long that I'll have to get an agent in order to post it.

Suffice it to say, I have good idea of the frustrations those working to promote the concept and implementation of women police officers working standard shifts in Afghanistan are dealing with.  And, I worry that programs such as these can fall through the cracks, and are thus sometimes not at the forefront of peoples' minds when considering the pros and cons of US troop deployment and redeployment.  The New York Times is covering the story quite well, and you can see the first article about the situation if you CLICK HERE