by John Floyd
Two weeks ago I wrote a column here on foreshadowing, and listed some movies, novels, and short stories in which that writing technique played a part. I also mentioned a film--one of my favorites--that used that approach especially well, telegraphing in a subtle way a number of different events that would occur later in the story. 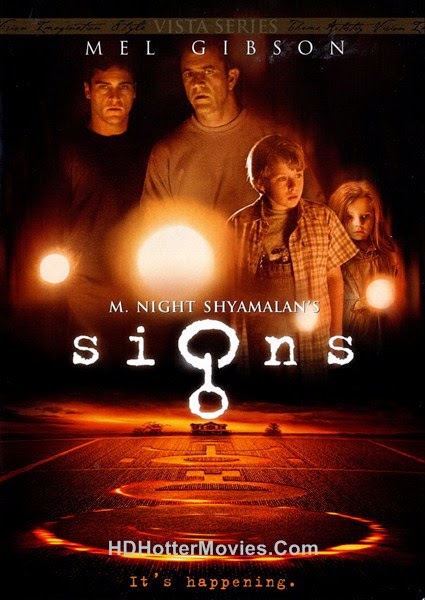 First, a little background. M. Night Shyamalan is an Indian-American writer/director who made several extremely good movies (The Sixth Sense, Unbreakable, The Village, etc.) before his career took a necksnapping, hang-onto-your-seat nosedive with several extremely bad movies (The Happening, The Last Airbender, etc.). In the early Aughts, while still going strong, he wrote and directed a film called Signs, starring Mel Gibson--a movie that used a sci-fi plot to tell what I thought was an excellent story about faith and family and courage. I watched it three times in theatres when it was released in 2002, and to this day I consider it to be one of the best examples of effective story construction. 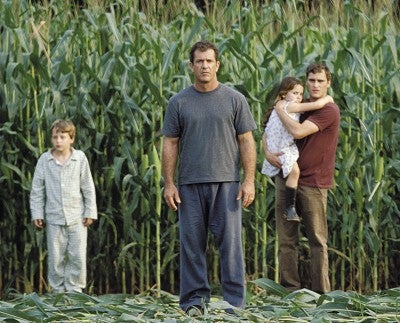 The title of the film has several meanings, the most obvious a reference to the strange "crop circles" often featured in the news some years ago. Most of these were proven to be hoaxes, but others are still considered by some to have been navigational aids (signs) created by visitors (scouts?) from another planet. The movie Signs begins with Gibson's character Graham Hess, an Episcopal priest who's lost his faith, discovering crop designs in the cornfields near his family's house. Other strange things soon happen, the suspense builds, and the story ends with Graham and his brother and two children not only confronting otherworldly forces but learning a life lesson in the process.

As I've said, a lot of seeds are planted throughout Signs that set up, and/or explain, later occurrences. The following are a few examples.

NOTE 1: SPOILER WARNING. If you've not seen this movie, close your eyes now, and then get thee to a Redbox, or to your Netflix queue. If you have seen it, I hope you'll keep reading, and then let me know whether you agree with my admittedly biased thoughts and opinions. (I used to be Night Shyamalan's Number One Fan.) 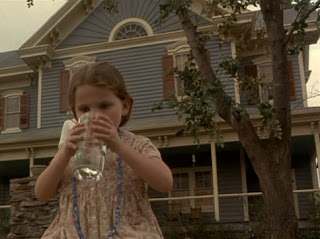 - Graham Hess's six-year-old daughter Bo doesn't like their drinking water, and is always leaving half-full glasses all over the house. In the movie's final scenes, it's revealed that water is the only thing that will kill the invading aliens--and Bo's leftover tapwater becomes a weapon.

- Graham's brother Merrill was a star baseball player, and holds a local record for the longest home run. (He almost made pro, we're told, but didn't because it always felt wrong "not to swing.") At the end, Merrill uses his baseball bat to save the day.

- Early remarks by Bo hint that her mother's not around. We later find out she died six months ago, a fact that forms the basis for the entire plot.

- When Houdini, the family dog, begins acting weird at the beginning of the movie, Graham tells his kids he'll call Dr. Crawford. Looking surprised, Morgan says, "He doesn't treat animals," but Graham replies, "He'll know what to do." Much later, it turns out Graham prefers to contact the MD rather than the nearby veterinarian--Ray Reddy--because Reddy is the man who caused the auto accident that killed Graham's wife. (Even then, we're never told that Reddy is a vet; we only get a quick shot of his mailbox, which has his name and profession written on the side.)

- Shortly after Houdini urinates on the kitchen floor, the sheriff tells Graham that several local dogs have been peeing on themselves--as if they'd smelled a predator.

- In one scene Bo tells her brother Morgan that she doesn't want him to die. At the end of the story, Morgan is the only member of the family who indeed comes very close to dying.

- In Reddy's otherwise empty house, a trapped alien gropes underneath a pantry door and Graham chops off a couple of its fingers with a butcher knife. In the final scenes, when one of the aliens is holding Morgan's limp body, we see that two of the creature's fingers are missing.

- In the first scene, at the farmhouse, an empty spot outlined on the wall indicates that a cross once hung there but is now gone. And early on, the sheriff refers to Graham as "Father"--the first indication that he used to be a priest. He replies, "Don't keep calling me Father."

- Ray Reddy, as he prepares to flee from his home, tells Graham that he has a feeling the creatures "don't like water." Turns out he's right: water burns their skin, like acid.

- In two separate nighttime scenes at the farmhouse, the crickets outside suddenly stop chirping. Nothing happens right away, and only later do we realize it was a sign that something sinister has arrived and is in the area.

- Graham's dying wife is seen in a flashback, instructing him in her last words to tell his brother Merrill to "swing away." That's exactly what happens, at the end.

- While hiding in their basement, Merrill tells Graham he's just heard on the radio that the aliens who have landed in other parts of the world have retreated, but that they did so suddenly and left some of their wounded behind. The creature that Graham wounded earlier (by cutting off its fingers) turns out to be waiting for them upstairs.

- The opening scene of the film (Graham coming out of the bathroom in their house) is repeated in the last scene. The second time, we see through the window that the seasons have changed (time has passed), and he's now wearing a priest's collar. 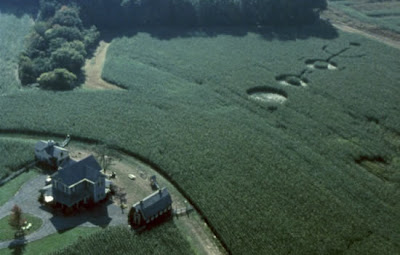 I realize that listing these examples this way, out of order and out of context, doesn't make the movie sound very interesting--but it is. It's a story that, at least to me, combines fine performances with a great setting and soundtrack, humor, steadily-building tension, and a stunningly emotional ending. I challenge you to watch the final scenes without brushing away a tear (and my movie tears are usually reserved for Dumbo and Old Yeller). Have any of you seen Signs? Any opinions?

Note 2: As I've said, I used to be used to be one of Night Shyamalan's biggest fans. Although I have friends who hated Signs, The Village, and another of his movies called Lady in the Water, I loved all three, and even wrote about Shyamalan in a 2008 Criminal Brief column, here, two weeks before The Happening happened. As things turned out, The Happening crashed and burned, and so did 2010's The Last Airbender, which I found myself hoping would be The Last Shyamalan Project. I recently watched his latest film, After Earth, and thought it was so-so.
div style="margin-bottom: 0px; margin-left: 0px; margin-right: 0px; margin-top: 0px;">

But I'm trying to remain loyal. The Nightster obviously has great talent, and maybe his next movies will be as good as his early ones were. If the are, I'll be the first to reboard his bandwagon.

Meanwhile, I'll just watch Signs again. I hope you will too.
Posted by John Floyd at 00:01