by Eve Fisher
We moved up to small town South Dakota 25 years ago.  There was one movie theater, that back then showed movies about 6 months to a year late.  (Things have improved.)  Back then you could rent videos - remember those?  and the main rental center was at a local liquor store.  Let's just say that the selection was limited.  We missed a lot.

But now, with Netflix, I can get almost anything I want.  I troll Netflix the way some people troll bars, looking for suitable pick-ups.  About the only thing I won't watch is anything with extreme gore.  (I have a sensitive stomach.)  And if the show is good enough, I'll read the book. 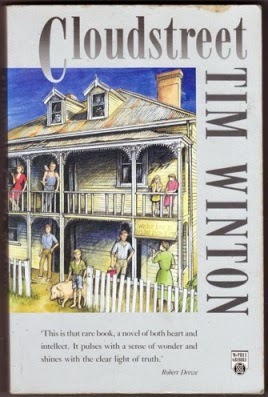 A classic example of this is Cloudstreet, by Tim Winton of Perth, Australia.  It's Australia's favorite novel, and the miniseries was produced by the Australian television station Showcase.  I rented the miniseries - 6 episodes - and we binge-watched it.

Two families, the Pickles and the Lambs spend over 20 years living in the same, large, ramshackle, haunted (more about that later) house.  They split it down the middle, and a good thing, because they are night and day to each other.  Sam Pickles is a gambler, his wife Dolly is the sexiest drunk God ever put on this earth; between the two of them there isn't much on the table or in the future for their kids.  The Lambs are industrious, but with Oriel as the matriarch, they have to be:  she runs a tight ship.  As her husband, Lester says, "People have always been a disappointment to her."  The Lambs find meaning in God's grace, the Pickles, in luck.  The Pickles' God is the "Shifty Shadow" of fate, and Sam is its high priest.  The Lambs' God is a maker of miracles, although they also trust to the spinning knife, because it's "always the miracles you don't need."  Like a talking pig.  Or a son (Fish Lamb, the narrator) who Oriel beats back into breath after drowning, but not much else, or so it seems.

The house at Cloudstreet is a character in itself.

It moans, it breathes, it lives - it's "a continent of a house", trembling with life, past and present.  It's haunted by the ghosts of at least three stolen Aboriginal children, who were being "trained" by an eccentric woman to become nice white ladies at tea before their suicide.  Fish Lamb cries to it; Oriel Lamb runs from it, to the point where she sets up a tent in the back yard and sleeps out there for almost 20 years.  Add to all of the above magical realism, two resurrections, a plagiarist, a parrot that craps money, Lester's ice cream, Oriel and Dolly dancing for the dead, Quick Lamb glowing white hot as the sun from the inside, Fish Lamb leaping, a boat that sails on grass, and a bilocating dog... It's a miniseries worth seeing.


- BUT WHAT HAPPENED TO THE SERIAL KILLER? -

In Cloudstreet the novel, one of the darker plot lines is provided by the real life Nedlands Monster, Eric Edgar Cooke, who terrorized through Perth from 1959-1963.  He committed over 250 robberies, during which he killed 8 people, and tried to kill 14 others.  It's true that Cooke was a horribly, notoriously abused child, frequently hospitalized for head injuries.  He was born with a cleft palate and had many surgeries, which weren't entirely effective.  He joined the armed forces, but was discharged once they found out about his record of B&E, vandalism, and arson.  He married in 1953 and he and his wife had seven children.  Some time after 1957, after two years' imprisonment for stealing a car, he went on a killing spree, that was the most entirely random thing you can imagine. He shot people, strangled them, stabbed them with knives and/or scissors, ran them over with cars, and axed them.  Whatever worked.  Some he killed when they woke up while he was robbing their house in the middle of the night.  One he shot dead when they answered his knock at the door.  He was eventually caught, tried, convicted and hanged in 1964.

Sadly, before Cooke was convicted, two false convictions were made:

None of this shows up in the miniseries, but in the book, after Rose Pickles (Sam and Dolly's oldest) marries Quick Lamb (Oriel and Lester's oldest), Quick becomes a police officer, one of many assigned to try to catch the Nedlands Monster.  You can see "the murderer" as a symbol of another way of life, or a way to add to the tension, or as another example of the haunting of the world, the way Cloudstreet is haunted:  take your pick.  But he's all over Part IX:  he even shows up at the Cloudstreet house at one point, (looking for who?) but is chased off by the talking pig while the Aboriginal (sporadic visitor and prophet) watches approvingly.  And his eventual capture is another turning of the "shifty shadow", this time to good luck.

I don't know why they cut Cooke out of the miniseries.  (It's still worth seeing, even without him.) Maybe they thought that no one in Australia wanted to see it.  And I know there's never enough time in a movie or miniseries for everything that's in the book.  But still.  The novel was published in 1991, the miniseries made in 2010, and I would swear that if it had been made in America, they'd have left that serial killer in.  Can you think of any American miniseries where the serial killer got left out?
Posted by Eve Fisher at 00:01