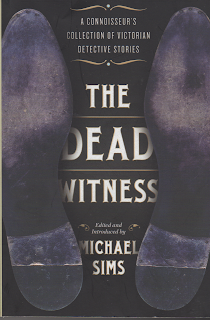 
My favorite fiction in the crime genre is detective stories. Before I retired I didn’t read the introductions to anthologies because I felt the summaries of the stories would interfere with my enjoyment. Once I retired and began close reading, I discovered the introductions can be very informative, especially in putting the stories in historical context.
I bought the anthology The Dead Witness because of the description above the title: “A Connoisseur’s Collection of Victorian Detective Stories.” I wondered if the connoisseur had included any surprises, if, in fact, he met his aim “to represent the vigor and charm of the Victorian detective story at its best.” Based on the three stories I read for this post, he has done a good job. I chose the stories because the connoisseur claims they were firsts.

"The Secret Cell" by William E. Burton (1804-1860) "has never been reprinted prior to its first appearance in 1837." It predates Poe's "Murders in the Rue Morgue," but doesn’t replace Poe as the father of the detective story because it “doesn't challenge Poe's preeminence."
When her daughter Mary disappears, Mrs. Lobenstein, the unnamed narrator’s former laundress, asks him to find her. He hires a policeman friend, who later in life became “the head of the private police in London,” to find Mary. Their investigation reveals she has been kidnapped. Their search leads them to a “secret cell” on the grounds of a Franciscan Monastery. With the help of more policemen, they storm the fortress to rescue her.
No way could this story be considered as the template for the detective story. It was published only once probably because it is so badly written. Reading the the first person narrator felt like listening to a garrulous old man.
An example of the prose style: Mrs. Lobenstein’s husband “had scarcely embraced his family ere he was driven off, post-haste, to the other world....” He died.
The detective story would have been stillborn if Burton had been its father. 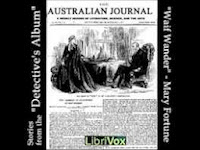 "The Dead Witness; or, The Bush Waterhole" by W. W. (Mary Fortune 1833-1910), published in 1866 in the Australian Journal is "the first known detective story written by a woman." She published poems and stories using male pen names. When she began writing a series "The Detective's Album" an editor changed Waif Wander to the “genderless W. W.”
Australian police detective Brooke is sent to a small town to find a young artist named Edward Willis who has gone missing for several days. Two clues, a faulty photographic plate and a missing sheep dog, lead him to a waterhole where blood was found on the ground. While he and the shepherd Dick watch the sheep drink, a corpse rises to the surface--the dead witness. A good story, though the long, well done descriptions of the scenery seem, at times, to be padding. I downloaded three of Fortune’s novels that are in the public domain from University of Adelaide Library. 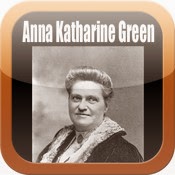 “An Intangible Clue" by American Anna Katharine Green (1846-1935) features her female detective Violet Strange. Green was the first woman to write “a full-fledged detective novel”, (The Leavenworth Case published in 1878) and supposedly influenced Agatha Christie.
The editor disagrees with some critics that The Dead Letter  by Seeley Regester (pen name of Metta Victoria Fuller Victor) was the first “book-length detective story by a woman.” He argues that it is not a true detective story because the detective uses the psychic visions of his daughter to solve cases, and Regester was "an inferior writer who depended upon coincidence, exhibited little wit, and had a poor sense of pacing."
Violet Strange, a socialite good at solving crimes, works part time for a private detective firm but doesn't want to get her hands dirty solving "low-down crime." To persuade her to help the police with the case of an old woman who was brutally murdered in her home, her boss claims that a box with her name on it was found in the house. She realizes that he in fact wrote her name on the box. At the crime scene, pretending to be a curious, dainty woman as a policeman leads her about the house, she immediately identifies the clues that lead to the apprehension of the murderer.
I downloaded some of the Violate Strange stories from the Gutenberg Project and included them in my to-read file.

Women have come a long way. Today, no editor or publisher would dare suggest a woman use a male or genderless pen name to get published, would he?


I hope you all had a 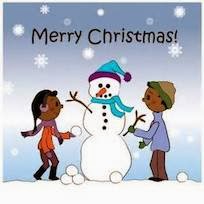