by Dixon Hill
A Symphony of Subtleties

Accents, in my opinion, are comprised of subtle linguistic aspects. But, when these subtle aspects—of tonal inflection, word choice, phraseology, and myriad other factors—combine, they can team-up to dominate the way a person speaks. The greater the linguistic domination, the “heavier” we say a person’s accent is. That’s the way I see it. And, I have a certain feel for accents. After all …

I don’t do it on purpose; it just happens. Put me in a room with somebody who has an accent, and before too long I’ve caught that accent the same way a hypochondriac might catch a cold. Instead of becoming infected with my conversation-partner’s sniffles, I’m speaking with his twang, maybe dropping certain parts of words, unintentionally borrowing certain phrases, widening my mouth when I make a vowel sound, or perhaps accumulating schwas.

Sometimes this comes in handy. When I was stationed at Fort Bragg, North Carolina, for instance, I quickly discovered that many local mechanics tended to automatically raise their rates when working on cars that belonged to folks who “ain’t from aroun-cheer.” So, I made it a habit to drop into a drawl as soon as I hopped out of my convertible at the repair shop. The “Fellowship of the Ya’ll,” as I called it, earned me good discounts on new brakes and other necessities.

On other occasions, however, my odd tendency to capture accents leads to embarrassment. I recall speaking to a British gentleman who suddenly cut me off (something I’ve noticed Brits rarely do) to ask: “Are you making sport of me?” (I don’t think he used the word “sport,” though. But, I can’t remember the word he did use.) I apologized, and explained that I tended to “catch accents” but didn’t mean to poke fun at anyone. In fact, I hadn’t realized I was doing it, until he called my attention to it.

After a moment he said, “I see. So, you’re a bit like a human Macaw, then, aren’t you? Or mynah bird, perhaps.”

My automatic response? “Snap!” We both burst into laughter.

While teaching at the Venezuelan Commando (Cazador, or “Hunter”) School, my buddies and I liked to frequent a nearby café, where the waitress was happy to serve me “Peksi Lijera” (Pepsi Light). I spoke to her quite a bit, and learned to order my “Peksi” early-on. In fact, I accidentally acquired quite a bit of her accent. Unfortunately, the reason she said “Peksi” instead of “Pepsi” was because she had a speech impediment—which I also temporarily acquired, thinking it was part of the local dialect!

When studying Arabic, at the Defense Language Institute, we spent the first twelve months learning to read, write and speak Modern Standard Arabic. This is basically the language of the Qur’an.

After that, we broke into smaller classes and focused on individual dialects for the next six months. The dialect I studied was the one spoken in Egypt (a nation pronounced “Musr” in Arabic, with the “s” held for an extra half-beat, compared to most contemporary English usage, and wrapped into a breathy, brief, relatively un-voiced, trilled “r” sound). This was the first time I’d been introduced to an in-depth study of dialectal differences in language, and I found it fascinating—if somewhat over my head.

The most interesting case of dialectal differences I ran into, however, was in Africa.

On our first full day in Ghana, we were taken to a museum and introduced to the “Twri of Ashanti.” (At this point, I should probably point out that Twri can evidently sometimes also be written or pronounced: “Chee” or “Tshee”, or “Twee”—but, I was taught it as “Twri”, so that’s what I’ll use here.)

The word “Twri” is—surprisingly, perhaps, for a westerner—pronounced just as it looks. The word begins with the “tw” sound we use in the word “Twine”.

The “wr” sound takes that unvoiced w sound from the word “twine” (minus any vowel-ing, of course: just the “w?” part of the w sound in the shorter word “wine”). Then, this w sound is rolled into the back-of-the-mouth, mid-to-upper-throat part of the r sound we use at the beginning of the word “roar.” Now, combine the two sounds, transitioning from the w sound into the r sound without stopping in the middle. Don’t feel like the Lone Ranger if it takes a bit of practice to learn to smoothly transition between w and r sounds.

The “i” sound is pronounced “ee”, so the entire word “Twri” comes out sounding a lot like the English word “Tree” except that it has a w sound between the t and the r. In fact, as I later discovered, this word “Twri” is the “English” word that many people in Ghana often use when talking about a tree in the forest—which helped me more fully understand why the person explaining the “Twri of Ashanti” was, at the time, standing and pointing at a giant tree painted on the two-story wall of the museum as he did so. 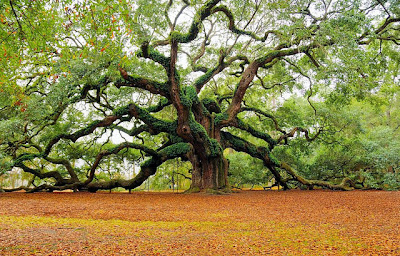 That painted tree was shaped similar to the tree seen on the right, but each leaf held the name of a village, while the trunk had the word Ashanti painted on it, and some of the major branches carried other names.

The painting was designed to illustrate how the language of the Ashanti peoples (Twri) had branched into many dialects—some primarily used by peoples other than the Ashanti (hence the names painted on some of the larger branches).

Ghana is not a giant country; in fact it’s area is smaller than that of the state of Oregon. Because the people had only low-speed transportation for hundreds of years, however, coupled with sometimes rather inhospitable terrain, villages were often relatively isolated. This physical isolation resulted in relative linguistic isolation, creating linguistic differences between villages to an extraordinary extent, particularly when one considers the limited area they are all contained within.

These differences are so great, in fact, that many people I met there did not consider each village to have its own dialect, but rather its own language. I met far more than one person who told me he spoke over twenty languages. Usually, he might speak English, French and Twri—but instead of saying he spoke Twri, he’d then start listing all the village dialects he spoke. Which is not to say that the village dialects weren’t quite different from each other.

What Does This Have to do With Writing?

One of the most esoteric concepts in writing, imho, is “voice.” And, somehow, there seems to be a connection between accents and voices—including the written “voice”—which runs much deeper than just a twang.

As I wrote earlier in this essay, an accent can cause subtleties to combine in a domineering way. This changes my speaking voice. In my own experiences as an accidental accent thief, I’ve noticed that slipping into another accent sometimes even shifts the tonal range of my voice several octaves up or down the scale. It influences word choice, phraseology, sometimes even paragraph order.

Tone, word choice, phraseology, paragraph or word order—it’s beginning to sound as if we’re talking about aspects of written “voice” here, doesn’t it?

I found myself explaining this to someone, a few days ago, when he asked me if I read books or short stories when I was working on a story or novel. I answered that I did read while working, but had to be careful not to read anything with a “conflicting voice.”

Answering my friend’s subsequent question (“What the hell does conflicting voice mean?”), led me to explain that I’m not just an accent thief. In writing, I have to be very careful not to let the voice of my work be unintentionally altered by the voice of something else. Further, if I read something that has a voice totally alien to the voice I’m writing in, it can completely derail my project until I can get that other voice out of my head—which can take awhile.

About six months ago, I spotted a visitor in our church, here in Scottsdale, who had scars on his face that told me he was a chief’s son—if he came from Ghana. His eyes lit up when I said hello in Twri, and after he responded in kind we shook hands, snapping our fingers off each other (a common Ghana practice, I believe) then gave each other the “thumbs-up” while saying, “Ay-yea” which means roughly “yes” or “okay”.

We called each other “Medonfo!” (may-dawn-foe) then, meaning “my friend” and hugged (another common practice in Ghana, I believe). But, when he asked where I’d learned to speak Twri, he professed not to know where Akim Achiaze was. Undaunted, I began listing all the ways I’d heard it pronounced, and when I said, “Akim Uh-chazzee” he clapped his hands and cried, “Uh-chazzie! Where they have the Army Jungle School—it’s way back in the bush!”

He knew the place, alright. He just wasn’t used to hearing it pronounced in an Achiaze accent. And, since that’s where I’d spent almost all my time in Ghana, that’s the stolen accent I spoke.