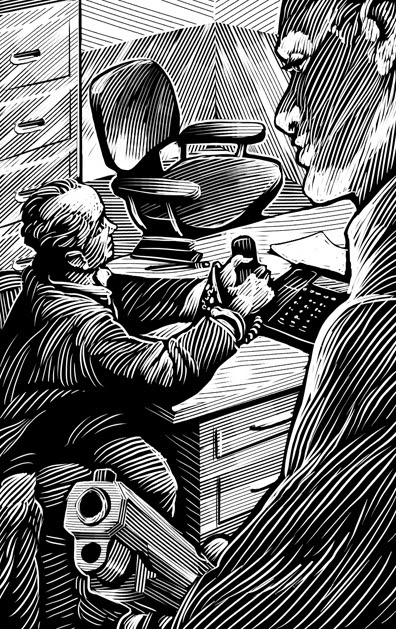 The great picture on the right is the illustration by Tim Foley which appears with my story in the October issue  of Alfred Hitchcock's Mystery Magazine.  It is used here with his gracious permission.  You can find much more of his work at his website.

This particular issue of AHMM has stories by two SleuthSayers: David Edgerley Gates and yours truly.  I thought I would write about one of those stories and since I haven't read David's yet, what the heck, I'll discuss mine.

Which brings me to Jack Ritchie.  As I have said before I have probably stolen more from Mr. R. than any other single author.  He was a master of the comic short crime story. 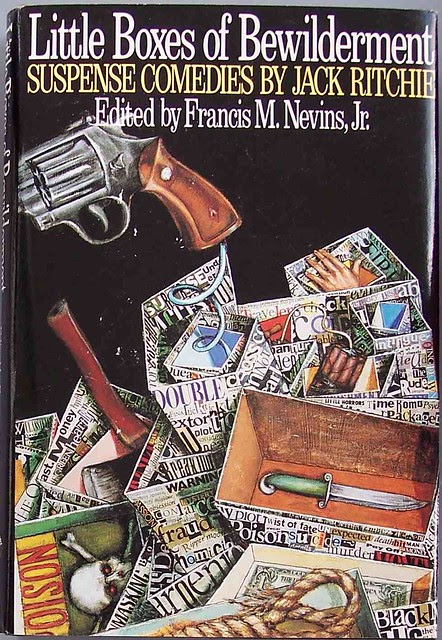 A while back I was pondering one type of story he was fond of.   These stories begin with two men in a room, one of whom is holding a gun on the other.  (Two examples you can find in his Little Boxes of Bewilderment are "Shatter Proof" and  "A Taste For Murder.")

As a set-up this has a lot to recommend it.  Suspense?  Built-in.  Starting in the middle of the action?  Absolutely.  Character motivation?  Well, we can assume one guy is hoping not to get shot.  As for the other guy's motive, that''s how a set-up turns into a plot.

While pondering this concept I came up with what I hoped was an original take on it, and "Two Men, One Gun" was born.  As for motivation, here is how the tale begins:

"Here's the story," said the man whose name was probably not Richard.  "Once upon a time there were three men who hated each other."

That's the gunman's motive.  He wants to tell the other guy a story.  Surely there must be more going on.  Why choose this man as the audience?  Why use a gun to hold his attention.  But I make it clear right at the beginning that this is a story about storytelling.  The act of telling this tale will change lives, Richard's included.

By the way, last year when my short story "Brutal" appeared in Hitchcock's I told you that it was one of two stories that begin in the same seedy office building I visited years ago.  No idea why that run-down place made such an impression on me, but "Two Men" is the other story set there.

One odd thing about this.  Although it was inspired by a great writer of humor, my story isn't particularly funny.  There's some wit, I hope, but it's more about suspense than guffaws.