I recently sent the novel I have been working on to various GFRs (Gullible First Readers) and am busily contemplating their wisdom.  One note from James Lincoln Warren set me thinking.

He commented on which of the bad guys in my book were punished and which weren't.  I replied that I had expected one of them – we will call him Smith – to get away unscathed.  As it is, he wound up getting scathed, in spades.

What happened?  Well, someone registered such a  strong and eloquent protest I had to reconsider.  Who was it that insisted Smith pay for his sins?

It was another character in the book.  This person – sorry, but I will call him Jones – in effect said: "It's not fair!  You've built me up through the novel and never given me anything important to do.  I have the personality and the motive to seek revenge.  Give me the method and opportunity and get out of my way.  Remember Chekhov's gun!"

What my eloquent fictional friend is referring to is a dramatic principle first stated by the great Russian playwright: If a gun is hanging on the wall in the first act, it must be fired in the last.  Mr. Jones, was claiming to be that gun, primed and ready.

I have known a lot of writers to talk about their characters "coming alive" and  convincing them to change a planned action.  I believe I have only experienced it twice. 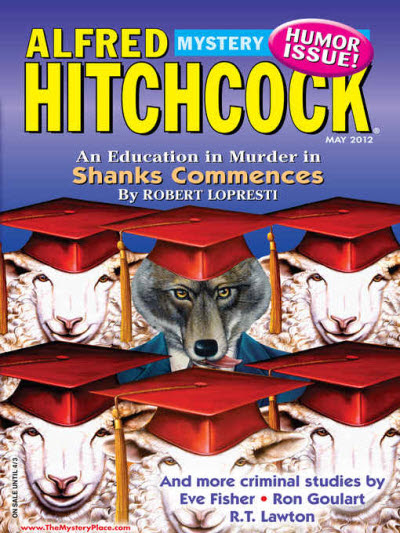 Besides Jones, the other guilty party was Cora Neal, writer of women's fiction and beloved wife of Leopold Longshanks, star of many of my short stories.  They have always had a somewhat testy relationship - well, here is the first sentence of the first story in the series.

"For heaven's sake, Shanks, try to behave yourself today."

They love each other, but Cora does seem to spend a lot of time chewing him out for sins real or imagined.  But in one recent story after Shanks had done something outrageous and I expected Cora to complain accordingly, she laughed instead.

I was stunned.  It was a completely different side of her personality.  And it has effected how I have written about her ever since.  (You can see that more clearly in last year's "Shanks Commences" than in this year's "Shanks' Ride").

So let me end with a question for you writers out there: do your characters ever pick fights with you?  If so, who wins?
Posted by Robert Lopresti at 00:01

Rob, my characters not only pick fights with me, they usually win.

Congratulations- it's always nice to be on the cover!
And what a clever image.

All the time, Rob, all the time. They pick fights, they sulk, and sometimes they just plain walk off the set.

I can't think of a more difficult group of people to work with, than my characters. They hardly ever like each other, and don't seem to like me much either.

John, your comment is going up on my Unfamiliar Quotations page next time i revise it.

I once wrote a story in which I intended to kill off a character pretty quickly, but he refused to die. (I eventually got rid of him via force majeur.) I think this problem arises when the plot you've intended doesn't gibe with the character you've developed. The writer in you looks at the action you originally intended, and then realizes it lacks a certain credibility. It's easier to alter plot than to alter character. So now I usually will design a scene with that in mind. If the character is going to upset the scene, I send him somewhere else for the duration.

"It's easier to alter plot than to alter character." Very wise.

In revising this novel I followed each character through seperately and found that one guy was so out of character so to speak in one scene that I had to replace him with somebody else.