The Death of Laura Foster 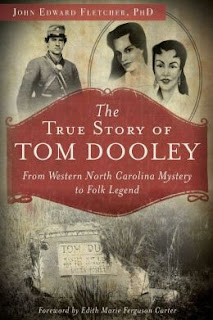 Today's article will interest both followers of American music and true crime, an investigation into the hanging of a folk figure, Tom Dooley, as researched and written by a descendent of parties involved.

John Fletcher and I began corresponding following an investigative article I wrote about Tom Dooley titled (with a nod to Twin Peaks), "Who Killed Laura Foster?" He was just beginning his research, which has become a new book, The True Story of Tom Dooley, published by History Press. It's a must for those interested in this legend.

Today, John shares the genealogy with us. Follow along with this tale from yesteryear…


The Death of Laura Foster

The Legend of Tom Dooley is an enduring mystery in western North Carolina even a century and a half after the incident occurred. Why is that the case? In part, the 1959 ballad hit by the Kingston Trio, “Hang Down Your Head Tom Dooley,” has helped to keep the story alive.

However, an examination of the existing records of the case raise many questions. For example, the original arrest record names Thomas Dula, Ann Pauline Dula, Granville Dula, and Ann Pauline Melton as the suspects in the disappearance of Laura Foster. The Court records, in contrast, name Thomas Dula and Ann Melton as the defendants and name Lotty Foster, Pauline Foster, and several others as material witnesses for the Prosecution. Who were these individuals and what was their relationship to the Murder of Laura Foster?

The murder Indictment charged only Tom Dula with Laura Foster’s murder, but it also indicted Ann Melton as an accessory before and after the fact. The “after the fact” charge was later dropped from Ann Melton’s charges, and her trial was separated from Tom Dula’s trial. This separation was made because if Tom were not guilty of the murder, then there could be no valid charge against Ann Melton. But, who were the other two suspects, Ann Pauline Dula and Granville Dula; and, what was their involvement in the murder of Laura Foster? Furthermore, who were the witnesses, Lotty foster and Pauline (or “Perline”) Foster in the local vernacular?

A search of census records from 1850 to 1870 reveals a curious result. Lotty Foster, Ann Melton’s mother, turns up as Carlotta “Lotty” Triplett in some records, but as Lotty Foster in other records. Her daughter, Anne, turns up as Angeline Pauline Triplett in some records, but as Ann or Anne Foster in other records. The other Dulas, mentioned in the arrest warrant, turn up as the children of Tom Dula’s uncle Bennett J. Dula II. That is, Ann Pauline Dula, age 16 and her brother, Granville Dula, age 13 appear in the 1860 Census. They are Tom Dula’s first cousins as their father is Thomas P. Dula’s (Tom’s father) brother. The question naturally arises, “Why are they never mentioned again in court records?

A second unknown is the mysterious person, Pauline (“Perline”) Foster who is not found in census or other records. She is identified in the court records only as a young woman from Watauga County who is a distant relative of Ann Melton. She reportedly came to Wilkes County to visit her (unidentified) grandfather and to see the local doctor to be treated for a venereal disease that she had contracted in Watauga County. Looking for local work to pay for her medical treatments, she was hired by the James Meltons to work for them during the summer of 1866 while receiving medical treatments for her disease. The Meltons were not aware that she was undergoing treatments when they hired her.

The court records show that Tom Dula’s cousins, Ann Pauline Dula and Granville Dula had nothing to do with the Laura Foster murder, and the person who was arrested with Ann Pauline Melton was actually Pauline Foster, not Pauline Dula, but why Granville Dula was arrested has not been explained. Possibly, he was a suitor of Laura Foster’s at the time of her disappearance.

Laura had many suitors, and was known locally to have “round heels,” meaning she was easily moved onto her backside by her suitors. Three of the persons named in the arrest warrant were arrested, but provided alibis for the time that Laura disappeared, thus were released as “not guilty”. The central question remains, “Who is this Perline Foster and how is she involved in the murder case?”

A search of Watauga County records turns up two census records in the years 1850 and 1870.

In 1850, a Levi F. Foster, age 25, is found with a daughter Anna age 4. In the 1870 census, the same family is found but is missing the daughter Anna. However, living next door to Levi is a John Scott with wife Anna P. Scott, who is possibly the missing daughter Ann Pauline Foster, age about 26. If ‘Perline’ Foster is a distant relative of Ann Foster Melton, then the connection must be through her Foster father. That means that the relationship of Levi Leander Foster must be traced to Ann Foster Melton’s Foster family. Levi Foster does not appear in the 1860 census of Watauga County; however, a careful search of the 1860s tri-county censuses for the first names, turns up a Levi F. Dula with exactly the same family members as Levi Foster’s family in the 1850 census of Watauga County. Living next door is the family of John ‘Jack’ Dula of Kings Creek, Caldwell County, NC.

To make a very long genealogical story short, Levi Foster turns out to be the illegitimate son of John ‘Jack’ Dula with a daughter of Robert Foster and Mary Allison, also residents of King’s Creek in Caldwell County. Robert Foster was the brother of Thomas Bell Foster of Wilkes County and he was the father of Wilson Foster, Laura Foster’s father, and Carlotta Foster, Ann Foster Melton’s mother. That explains Pauline Foster’s relationship with Ann Melton.

In fact, Pauline turns out to be the fourth cousin of both Ann Melton and Laura Foster. Also, Laura Foster is the first cousin of Ann Foster Melton. John “Jack” Dula is the grandfather that Pauline Foster is visiting there in Caldwell County, and also makes her a second cousin of the defendant, Thomas Dula.

In 1860, the Levi Foster family are using the surname of Dula, his father’s name and Ann Pauline Foster is actually known locally as Ann Pauline Dula. That is why Wilson Foster named Ann Pauline Foster as Ann Pauline Dula in the arrest warrant. That was the name he knew her by when they were living near him in the 1860s. By 1866, her family had moved back to Watauga County, but she returned to Wilkes for medical treatments. These relations also explain why Perline knew and was fond of Tom Dula; she was his second cousin, and probably knew both him and Laura Foster well from the time she lived near them while growing up in Caldwell County.

That brings us back to “Lotty” Foster, aka Carlotta Foster Triplett. The 1860 records list her as Lotty Triplett, with her three children, Pinkney Andrew Triplett, Angleine Pauline Triplett, and Thomas Triplett. Why are they listed with the Triplett name if all her children were illegitimate as other authors have written? A detailed genealogical search of the Thomas Bell Foster family lists the first name of her husband as ‘Francis’, but no last name is given. One easily then surmises that his surname must have been Francis Triplett.

Who was Francis Triplett? A detailed search of period records does not reveal anyone by that name. However, there is a clue in Carlotta Triplett’s census records from 1850. She is living in the household Of James and Nancey Brookshire Brown, who are in their 70s. Why is she living with them? It turns out the Browns have two daughters, Nancey Brown and Adeline Minerva Brown. The first daughter, Nancey, was married to a Martin Triplett in 1820. The second daughter, Adeline, was married to Bennet J. Dula II, and they were the parents of Ann Pauline Dula and Granville Dula.

Martin Triplett was divorced from Nancey Brown by 1822, but they had two children, a daughter Irene and a son. After the divorce, the son remained with his father and a stepmother Mary Winifred Hall, the daughter of Thomas Hall and Judith Dula. The daughter remained with her mother after the divorce. The son, Francis Triplett, married Carlotta Foster about 1839-40 and he fathered, at least, the first three of Carlotta’s children. By 1850, Francis is absent from their household, and Carlotta with her three children, are living with her mother-in-law’s parents. In other words, her children’s great-grandparents.

What happened to Francis is unknown. One might speculate that he left for the 1849 Gold Rush and may not have returned. Sometime after that, about 1859, Carlotta Foster Triplett changed her and her children’s surname to Foster, her maiden name. Exactly why she did this is unknown, but it must have had something to do with her husband’s disappearance. Thus, we now know why Lottie Foster, Pauline Foster, and Ann Foster Melton each had two different surnames. Carlotta’s children, at least the first three, were not illegitimate as is popularly believed, and Ann Pauline Dula who was named in Wilson Foster’s arrest warrant was actually Levi Foster’s daughter, Ann Pauline Foster.

Perline Foster, the principal Witness for the Prosecution, may not have been of high moral character, but her objective during the summer of 1866 was to be cured of her venereal disease so she could complete her marriage bond with her fiancé, John Scott. For that reason, she was not a paramour of Tom Dula, who was her second cousin, and was not a romantic rival with Ann Melton and Laura Foster and others for Tom’s romantic attentions. She did not transmit her disease to Tom Dula, who in turn, passed it on to Ann Melton. That disease transmission became the primary motive for the murder of Laura Foster. The evidence is that Laura was, in fact, the source of Tom’s infection. 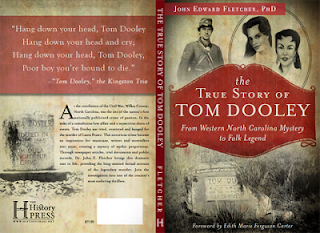 Pauline Foster may have slanted her testimony during the trials to protect Tom Dula and to implicate Ann Melton. Pauline certainly had no love for Ann Melton who had treated her quite badly during the summer of 1866. However, others testified that her testimony was very consistent during both Tom Dula’s trials. She implicated Tom and Ann Melton in the events leading up to the disappearance of Laura Foster and to the subsequent discovery of her burial site. Her testimony coupled with the other circumstantial evidence clearly defined Tom Dula as the likely murderer and that Ann Melton was fully engaged in its planning and the instigation of Tom Dula to commit the murder.

Tom’s final heroic act was to take sole responsibility for the murder of Laura Foster and to absolve Ann Melton from her involvement. Because of his final written confession, the Wilkes County Jury had little choice, but to set her free.

Angeline Pauline Triplett Foster Melton lived another seven years after her final trial. She bore a second daughter, Ida V. Melton, in 1871 with her husband James Melton. She died a very painful death in about 1875 from internal injuries received in a buggy accident. Justice was apparently finally served.
Posted by mystery guest at 00:00