by Dixon Hill
Summer-Time Reflections on Writing, Route 66, and the Digital Interstate 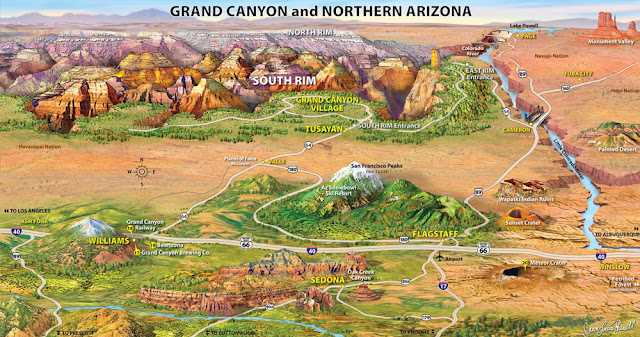 We took a family vacation last week. The photo below-right shows my son, Quen, about ten minutes after he saw the Grand Canyon for the first time -- an event I missed. 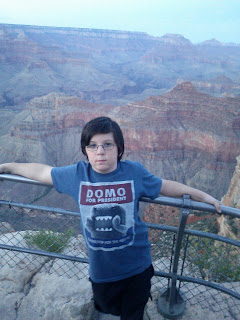 Reaching the Canyon’s south rim just before sunset, we found nowhere to park. So, I let my wife and kids out of the car, then orbited the parking lot until a slot opened up.

When I caught up to them, and asked Quen what he thought of the canyon, he told me, “It doesn’t look real!” A few minutes later, he dropped to his hands and knees, then shoved one arm far out, through the space beneath the fence seen here. Feeling around out past the rocks, his fingers closed on empty air. He turned his head, looking up at me: “It IS real!”

I took this photo after he stood again. And, it took him a bit longer to stand, than it had to drop down. Note that he’s gripping the guard rail, and his face reflects the danger of the drop behind him. He hadn’t been worried until he stuck his hand through that fence and felt the empty space beyond. Until then, that incredibly long drop to the canyon floor hadn’t seemed threatening.

The threat itself, however, had always been there. The threat hadn’t changed; my son’s perception had.

Essentially, Quen had fallen victim to a sort of inverse optical illusion. As a ten year old, he’s been raised in a media age that bombarded his eyes and brain with hundreds, maybe even thousands, of images of the Grand Canyon before he had a chance to see the “McCoy”. And, many of these images had been presented in high definition; they looked just as real as the Grand Canyon that now loomed inches beyond his feet.

When my son stuck his hand through that guardrail fence, the thing I believe he was feeling for was a screen. Because, hi-def images appear on screens -- and those screens are often very large. If you’ve been to an IMAX theater, you know what I mean.

It was only after my son reached for a screen, but found empty space instead, that the deep chasm before him became real. Until that moment, he wasn’t afraid of falling into the Grand Canyon. But, in that instant, he realized -- this time! -- the abyss he was seeing, was really there.

I can’t help but think there’s an important lesson here, for those writing in this digital age. A warning, perhaps, about the changing nature of reality-perception among young readers. A reality-perception we’ll have to come to grips with, and help readers overcome, if our writing is to have lasting meaning.

The Route to Realization

Our family trip itinerary was a bit a on the loony side. Or, perhaps I should say it was a little over-full. I picked up a rental SUV at noon on Tuesday, and we left town two hours later, planning to visit the Grand Canyon, Wupatki (Indian ruins), Sunset Crater (a dormant volcano), Meteor Crater, the Painted Desert, and the Petrified Forest, all while getting a little driving and photo op time on Route 66 -- before dropping the SUV back at Sky Harbor Airport in Phoenix by noon on Friday.

While all these spots can be “seen” on the cartoon map at the top of this post, that image is deceptive: our trip would actually take us more than 500 miles round-trip. Phoenix to the Canyon is 225 miles; Grand Canyon to the “Painted Forest” -- as my wife now calls the national park that combines the Painted Desert and Petrified Forest into a single driving tour -- is another 200. And, unbeknownst to the kids, my wife and I had also spotted a contemporary ghost town on our route, which we wanted to work in if we could somehow find the time. 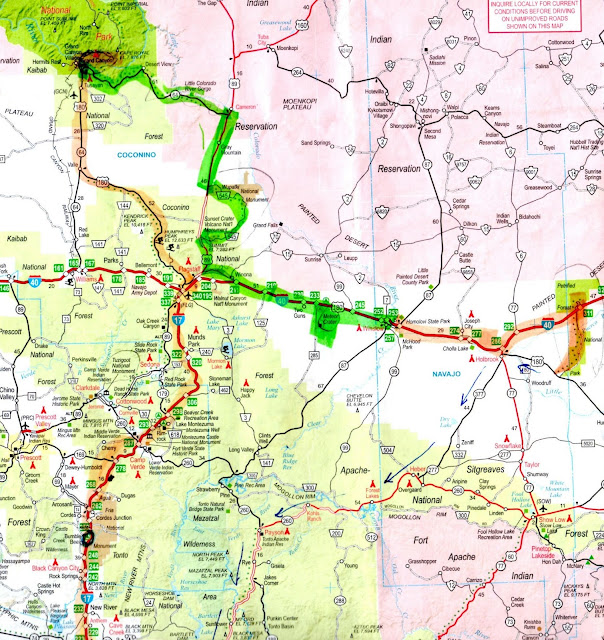 Our Day One route (orange) took us from Phoenix through Flagstaff and up to the south rim of the Grand Canyon, which -- as mentioned previously -- we reached just before sundown. We spent that night in Tusayan, just outside the canyon park entrance. Day Two (Green) took us back to the Grand Canyon, then on to Wupatki and Sunset Crater, back through Flag and over to a Best Western for a night in Winslow. Day Three (orange and green) we planned to forge on to the Painted Desert and Petrified Forest, then follow highway 180 up, to take Route 66 through Winslow on our way to visit Meteor Crater before getting back on I-40 and turning south in Flagstaff to head home.

And, that’s pretty much what we did. The only thing we dropped was Meteor Crater, because most of us had seen it before, and the kids were too pooped to do any more walking by the time we’d finished with the “Painted Forest”.

We’d seen a PBS special on “The Mother Road” a few months back, however, and the kids were interested in seeing Route 66, so I used this opportunity to get a little more driving time on the remains of that original old highway. Plus, Mad and I had our little surprise for them.

If you look at the highway map, you’ll see a spot that’s about half-way between Flagstaff and Winslow, labeled “Two Guns”. This is the site where the small town of Two Guns, Arizona once straddled a concrete bridge spanning Canyon Diablo. Route 66 passed over this bridge and Two Guns, established in the late 1800’s, survived -- prospering during the early 1900’s as a tourist stop on The Mother Road -- until I-40 was built about three-hundred yards to the north. The town sputtered on into the mid-60’s, then fell and restarted until it finally died out in the mid-70’s.

Below, you’ll see a shot of the entrance to a sort of “zoo” built to lure tourists to Two Guns. 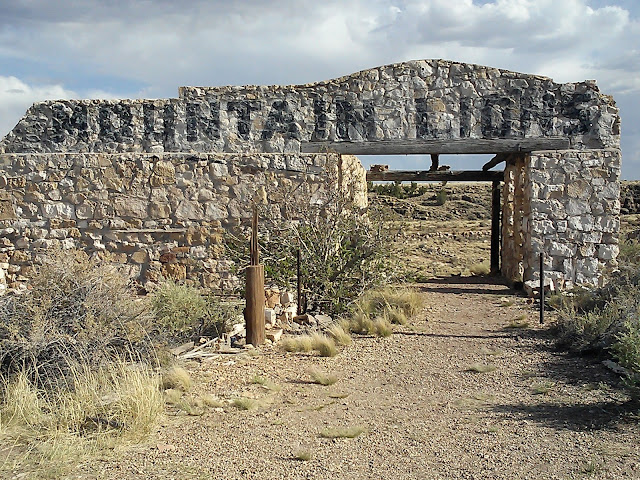 The zoo originally sat farther south, but was moved -- along with the gas station and general store -- to a location more advantageous to travelers on I-40. I took this shot with my back not 200 yards from traffic speeding down I-40, but the building stands in ruins as mute testament to the fact its “Mountain Lions” logo, once darkly painted in bold, couldn’t stop cars traveling 75 to 85 miles per hour. The Welcome sign no longer serves any purpose.

And that got me thinking:

How can we, as writers, capture and hang onto current and future consumers of our printed goods as these changes sweep over us? Many of my SS colleagues have taken first-steps along this path; I’ve read much of their work -- short stories and novels, both -- in electronic versions I bought online. But, is this enough? Are we thinking the right way? Or, are we victims caught in a pre-digital paradigm? 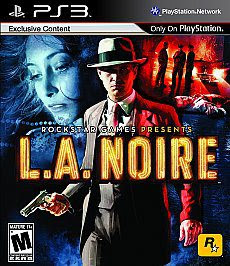 L.A. Noire, introduced in 2011, was the first video game to be shown at the Tribeca Film Festival, and it received accolades for its advanced storytelling.

According to Wikipedia: “L.A. Noire is set in Los Angeles in 1947 and challenges the player, controlling a Los Angeles Police Department (LAPD) officer, to solve a range of cases across five departments.  Players must investigate crime scenes for clues, follow up leads, and interrogate suspects, and the players' success at these activities will impact how much of the cases' stories are revealed.

“The game draws heavily from both the plot and aesthetic elements of film noir, stylistic films made popular in the 1940s and 1950s that share similar visual styles and themes, including crime and moral ambiguity. The game uses a distinctive color palette, but in homage to film noir it includes the option to play the game in black and white. Various plot elements reference the major themes of gum-shoe detective and mobster stories such as Key Largo, Chinatown, The Untouchables, The Black Dahlia, and L.A. Confidential.”

What does this mean to us, as mystery writers?

And, I wonder: Is the next “True Classic” -- a modern work that will be experienced and studied down through the ages -- even now being keyed-in by some Shakespearian software writer working for a video game manufacturer?

The folks who ran Two Guns were intelligent, industrious, and worked hard to save their livelihoods. But, that didn’t keep them from being literally “kicked to the curb” by a new technology that they couldn't figure out how to deal with.

I’ve not made any suggestions for the best way we can position ourselves, as our way of thinking is swallowed whole by this new one. I can’t really come up with any. And, I know a lot of people have been contemplating, and still are contemplating, this problem.

But, Two Guns serves as a grim reminder: We need to figure it out SOON, or the signpost up ahead might well look like the one at that once-bustling Route 66 stop. 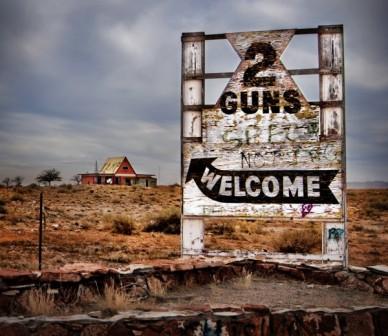