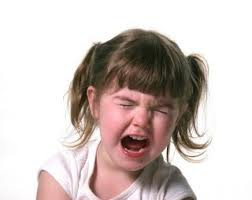 Here's a picture of my reaction to being told, "No."

Color that child's hair red and it could be a photo of a young Fran. My mom used to say she was glad I was an easy-going baby who didn't often need correction because I didn't like being told what to do. Now my hair is platinum blonde (okay, it's white), and I still don't especially like being bossed around.


Leigh's "Professional Tips: To Be or Not" on March 3, 2013, set me to thinking about writing rules, violations, and lots of other aspects of writing and teaching it. Does anyone remember e e cummings? That poet who refused to use capitalization or punctuation was my first encounter with writers who intentionally break the rules.

In 1939, Ernest Vincent Wright published Gadsby: Champion of Youth, a 50,110-word novel without a single "e" (apparently his name was exempt). In 1969, Georges Peree produced La Disparition, which omitted all "e's" in both the original French and the English translation, A Void.

That intrigued me so much that I thought about trying it with something I'd written. Being too lazy to seek something to translate to Non-E-Lish, I tried it with the opening of this blog:

Original Line: Here's a picture of my reaction to being told , "No."

Same Thought, Written Without 'E's: This photo shows how I look if I'm told, "No."

Original Paragraph: Color that child's hair red and it could be a photo of a young Fran. My mom used to say she was glad I was an easy-going baby who didn't often need correction because I didn't like being told what to do. Now my hair is platinum blonde (okay, it's white) and I still don't especially like being bossed around.

Same Thoughts, No E's: Color that child's hair titian and that photo could stand for a young Fran. My mom always said, "I'm glad my child was a good kid who didn't command lots of modification, as Fran couldn't stand disapproving words." Now my hair is so light that it's platinum (okay, it's bright as snow) and I still don't allow anybody to boss this old gal around.

That wasn't so difficult. Try it yourself, but please don't cheat and write the original with the conversion in mind or change any words in the original to make it easier.

I'm going to move on now because all the E's gathered around my keyboard are beginning to threaten me. One has even vowed to set my computer on fire if I don't let them back in.

In 2004, Michel Thaler wrote Le Train de Nulle Part (The Train from Nowhere.) This 233-page novel has plot, character, and action, but not a single verb! Thaler says, "The verb is like a weed in a field of flowers. You have to get rid of it to allow the flowers to grow and flourish. Take away the verbs and the language speaks for itself." I would have preferred to read that statement minus the verbs and see if the same message was delivered.

Leigh told us about those who want to abandon the verb "to be." Thaler took that to the extreme, but let's take a look at that nasty old verb. First, I've dealt with adults in writers' groups who weren't quite sure exactly which words are forms of the verb "to be."

So here's a reminder though I'm sure none of us need it:


ENGLISH CONJUGATION OF THE VERB "to be"

Grammatical conjugation of a verb requires making a systematic list of all forms of the verb for each person, number, and tense. The verb "to be" is the most irregular verb in English. The simple conjugation of the verb to be is as follows:

If you narrow those red words down by deleting repetitions, there are only eight of them: be, being, been, am, are, is, was, and were. Twice I've been in writers' groups with PASSIVE VOICE FREAKS. PVF's are people who go through other authors' sample manuscript pages and circle every one of those eight words and write PASSIVE VOICE and an ugly frowny face over them. The PVF's then look up with an expression that's uglier than the frowny face and makes me want to slap them, which I don't do because, as I've told you before, I am a sweet old southern lady.

Leigh wrote, "In particular, most advocates of removing most or all forms of the verb 'to be' point out it virtually eliminates passive voice."

Personally, I'd prefer the PVF's learn to correctly identify as passive only the structures where the verb "to be" is used as an auxiliary (known as "helping" until third grade) verb making the subject of the predicate the receiver of the action opposed to the giver of the action.

Example:
• The gun was fired by Fran who was ticked off by the PVF.
"Was fired" is passive as is "was ticked off" which makes this doubly less effective than the active:
• Fran fired the gun at the PVF who had pi _ _ ed her off.

Uh-oh! My samples are politically incorrect with the current gun issues in America. Please change "gun was fired" to "knife was thrown" and change "fired the gun" to "threw the knife." 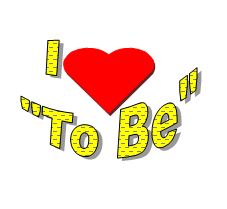 Most of the time forms of "to be" are used as linking verbs showing condition or existence of the subject. If they were good enough for Edgar Allan Poe, Stephen King, Jeffrey Deaver, and Harlan Coben, they're good enough for me.

My apologies if this turned into an elementary school English lesson. I started out aiming to tell you how I feel about some of the rules for writers, so I'll finish up this way:


Rules for Writers and How I Use Them

Even if lightning strikes the protatonist in the first chapter, I NEVER OPEN A BOOK WITH THE WEATHER--unless it's really important!

I NEVER write PROLOGUES--unless they're necessary!

I ALWAYS use "SAID" to carry dialogue--unless scream, moan, or whisper works better!

I ABSOLUTELY, REALLY, HARDLY ever use adverbs!

I'd run away like a greased pig at the county fair before I'd write regionally!

I avoid detailed descriptions of my characters, but my readers WANT TO KNOW about Callie's underwear!!!.

I NEVER use exclamation points because the rule says, "sparingly, no more than two or three per 100,000 words," and my books average 85,000 words, so I never get to use one.

Write it DOWN, then clean it UP!


What about you? Do you have any rules you obey or any you ignore? What bothers you about rules for writers?