Today’s post was inspired by Louis Willis’s post, last week, concerning character development and the impact it has on a writer’s sanity.

When I responded to Louis’s post, in the comments section, I’m afraid I have to admit . . . I wasn’t completely honest in my response. A sin of omission, in fact.

I wrote that I agreed largely with comments written by two other Sleuth Sayers (Elizabeth and Fran), tempered by a comment from a third (RT). The gist being:

(1) My writing seems to function best when plot grows organically, through character interaction.

(2) When characters refuse to drive the plotline where I desire, I tend to let the characters carry the day -- unless this pushes the plot into dimensions unfit for the story as I’ve come to perceive it.

(3) If things get too far out of control, I try to plant something farther forward in the narrative, which I hope will lead one of the characters to alter behavior in a way designed to organically correct the plot growth in the desired direction.

Now, all of the above is true. And, this may sound quite scientific and high-brow. But the truth is: It’s not.

Last school year, I voluntarily assisted my son’s teacher, by helping to administer Accelerated Reader Tests to kids in my son’s class, when they used the Computer Lab on Tuesdays and Thursdays.

Quen had a very nice teacher, that year. It was her first year with her own classroom. She was young, energetic, bright-eyed and excited to en-flame young minds with a desire to learn.

Which is why it caught me by surprise, one day, to hear her single-out a student while bringing the kids into the Computer Lab, by calling: “Okay, where’s my daydreamer? Where’s (whatever his name was), who’s always daydreaming? Huh?” When the kid presented himself, she sat him in the corner with a workbook, saying, “You sit there, where I can make sure you’re working. No daydreaming allowed here. You’ll never get ahead by daydreaming!”

Now, I understand kids need to pay attention in class. And, I know they need to get their school work done. But, the look on that kid’s face …

I understand the importance of not undermining the authority of a leader or teacher, so I sat on my tongue. But, my heart really went out to that kid. I wanted to go over and put an arm around him and say: “Cheer up, buddy. They gave me trouble for daydreaming, too, when I was in school. But, now I make money that way. I turn my daydreams into written stories that I sell to magazines. And, now I’m even working to turn one of my stories into a book. So, don’t let it get you down.”

You see, what I wrote in the comments section of Louis’s post, was really only the first part of my TRUE ANSWER to his question.

The second part of my TRUE ANSWER is: “I daydream.”

And, this is largely what I meant, when I wrote that I agreed with Fran’s statement: “...I generally need to let [characters] float around in my mind for several days to become real enough to me for their representation to seem right in the writing.”  I've never met Fran in the flesh, and I can't be sure exactly what she meant, but as for me: I daydream those characters into life.  That's how I get to know them.  And, sometimes my daydreams get a bit carried away.

In his post, Louis also asked some questions, which invoked a comparison of the methods writers might use to achieve character development or expression, against methods an actor might use to achieve the same ends. He wrote (italics added for emphasis): "Actors take what the playwright or screen writer has written and make the character their own, becoming the character. You fictionists, on the other hand, have to create several characters in one story, sometimes in paragraph or even one sentence. I was just wondering if you become each character in order to create him or her, to give them personalities, including the various emotions each must have to be believable."

Yeah, see, I do that “letting them float around in my mind” thing by daydreaming. But, sometimes … (lean closer, because I have to whisper this) …

Sometimes I do it by pretending I’m the people I’m daydreaming about.

This admission about pretending is really rather embarrassing for an adult, of course. I mean, it’s bad enough that I’m a grown-up daydreamer, without having to admit that I also sometimes “play” out what I’m daydreaming.  But, that's really the third part of my TRUE ANSWER to Louis's post:  "I play!"

On the other hand, this is really very similar to what I believe Louis meant when he spoke about actors becoming their characters. And, I learned to do this when I took on-camera acting classes at an academy downtown, when I was in high school.

There, for instance, I was taught to work up the emotions called for by a certain character in a certain situation, then to fix that expression -- the one that had been naturally called-up by the emotion in question -- on my face, and to study it in the mirror, looking to see which of my muscles were doing what, if some of my teeth were showing (and how and where they showed), etc. I was then supposed to back up and examine my body, my stance, and what was going on there.

I’m probably not a very good actor. However, I find myself doing the same thing when I’m working on a character, and jotting down notes about what his face might look like, or how his eyes might be squinted, his teeth showing only in the back lip-pocket below his jaw line as he snarls. And, I think these are useful details.

I also learned to do something similar in the army, but there they called it “conducting a rehearsal” or “dry-run practicing.” The army runs rehearsals for every operation it conducts, or at least tries to. When practiced on a grand scale, these rehearsals are called “maneuvers.” On a small scale, they may be called “rehearsal of actions on the objective,” or “practice moving through a denied area,” etc. But, they can also be practiced on an individual basis. 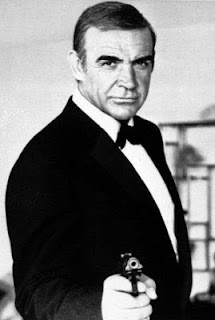 I don’t recall which book it was, but I do recall reading a James Bond story in which Bond is in his hotel room preparing to go into a dangerous situation. After dressing -- with his weapon in a shoulder holster, I believe -- he drops the magazine out and clears the chamber to be sure it’s unloaded. Then, he practices drawing the weapon and shooting himself in the mirror several times, altering his stance and grip until he’s sure he can draw and fire it the way he wants to -- at the target he intends.

When I went through SOT school in the army, I was surprised to discover that this is actually an accepted method of improving one’s marksmanship when conducting a quick-draw. And, I’ve done it several times since then -- in groups, and on my own -- working to simultaneously get my draw-time down and my shot-group focused.

No, I don’t jump around my office or living room, pretending I’m in a gunfight, or engaged in hand-to-hand combat, every day. But, I do find it useful sometimes, particularly when I’m not sure a fight scene in my mind makes sense. At these times, I’m likely to practice my hand-to-hand as if I’m in the situation I’ve dreamed up for the story. And, I try to see what “feels right.”

All of this, of course, is very much like “playing.” It’s very similar to what a child does when s/he plays. At the Children’s Museum in Indianapolis, I learned that children learn by playing. And, as a writer, I continue to learn by playing. Just as I did when studying acting, and as I did when conducting rehearsals in the army. It’s all a form of play-learning. And, I find it invaluable.

Though, it’s a bit embarrassing when my wife comes through the door, just as I kia! loudly while front-snap-kicking some invisible foe. Or, when I’m riding down the street in our car, and my wife suddenly asks, “Oh, my God. Who are you now? And who are you talking to?” because I’ve been sitting there silently mouthing words and moving my hands.

So, today's question is:

Anybody else out there find themselves acting out scenes from their stuff? (And, remember: you can always turn off your recognition with Google to post anonymously. lol)