Those of you who know me, or have some sense of my taste in books and writers, could easily imagine I'm not that crazy about cozies.  I'm a big fan of JUSTIFIED, for example, with its crazed hillbillies strung out on Oxycodone, and ready access to high-cap mags.  I like the dark corners of Dutch Leonard and Ian Rankin and Dennis Lehane.  Psychotics and losers and bent cops, high octane and graphic exit wounds.  It might then come as a surprise that I'm absolutely queer for a Brit mystery series that's set in the world of, wait for it, gardening.  Oh, my stars and whiskers.  What's next?  Pass the Earl Grey.  The old boy's gone gone into the deep end over DOWNTON ABBEY. 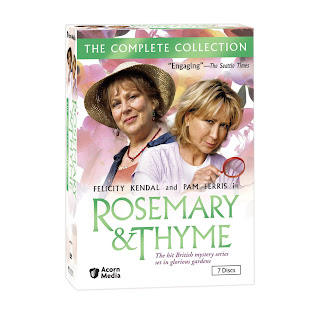 Well, not quite.  The show's called ROSEMARY & THYME.  Too cute by far for a title, you might say.  And what of its conceit, two gals of a certain age, in the middle fifties, say, who club up together to run a landscaping shop.  Not high concept, particularly, not Danny DeVito and Arnold Schwarzenegger as twins.  Who greenlighted this project?  Dead out of the starting gate.  (Oh, did I mention that Season Three picked up a bigger audience share than 24, in the same time-slot?)

Here's the premise.  Rosemary, the hottie, beats men away with a stick, but she's just lost her job.  Laura Thyme, a former cop, has been left by her husband of thirty years for a younger woman.  They pool their resources and start a business.  In amongst the pruning and spading and earth between their fingers, murdered bodies turn up in the shrubbery.  It follows as the night the day, that our two overly-curious heroines get sucked in, not that they're too averse, or how else would you have a show?

We should probably credit Masterpiece Theater and PBS for bringing Brit TV to the States., the most obvious example being UPSTAIRS, DOWNSTAIRS, but many others.  Then the raw market for product brought more, Benny Hill, and ARE YOU BEING SERVED, not all on PBS.  A&E syndicated a few, buying them direct.  Mysteries and cop shows were big, LOVEJOY, INSPECTOR MORSE, adaptions of Dick Francis.  Some of them better than others, some didn't make it across the pond.  THE BILL, for instance, has never been broadcast here, for whatever reason---impenetrable London slang?  It was John Thaw's breakthrough part, you'd think it would have an audience, after MORSE. Who knows?  LOVEJOY was big in the States, and even now, the complete series on DVD will set you back a hundred and eighty bucks on Amazon.  I love Ian McShane as much as the next guy (and DEADWOOD made him a household name), but a hundred and eighty bucks?

Why, then, is ROSEMARY & THYME so engaging?  Or the better question, why do I find it so charming?  It doesn't have Boyd Crowder, or Raylan smacking Dickie Bennett around.  It doesn't have Ian McShane saying "fuck" every third or fourth frame.  It doesn't even have Morse, ridiculing the long-suffering Lewis.  And the mysteries themselves, it must be said, are somewhat lame, although occasionally one will catch you by surprise. The two-part opening episode of Season Two, "The Memory of Water," completely blindsided me, even though it owed overmuch to Ross Macdonald, but we all steal shamelessly from the masters.  The answer is that the engine behind ROSEMARY & THYME isn't the plotting, but the dynamic between the two lead characters, who are both familiar, and comforting, but who also have the capacity to startle you.  And not always in comfortable ways.

I should come clean about my passion for Felicity Kendal (voted 'best bum' in a Brit poll, when she starred in the series GOOD NEIGHBORS, another show that's never translated to America), who plays Rosemary. She was saddled with the adjective "cute," early on, with her performance in SHAKESPEARE WALLAH, and never quite shook it, for the simple reason that she is.  The nice thing about this show is that she gets to leaven the cuteness with a quick dose of the acerbic.  Pam Ferris, who plays Laura, is nothing if not acerbic, at least in character.  Her range of parts is mildly astonishing, police procedurals, gothics, Dickens, and most recently CALL THE MIDWIFE.  It must be her face, a sort of plastic Rosetta stone, malleable but encoded.

The relationship between the two characters is relaxed from the get-go, a couple of girls who know better, out in the wide world, but there's a sense in which their vulnerability, the trust issues, make them uneasy, even with each other.  They rely on their instincts, and their instincts are sometimes at odds.  The best moments often come when they doubt one another, and one isn't quite convinced.  Usually this results in the unconvinced party being at jeopardy from the villain.  I never said it wasn't generic.

Every once in a while, though, something happens that's off the radar.  An episode where Laura's son comes to see her.  She thinks he's been recruited by his dad to beg her to come back, because her ex is a chickenshit.  So he is, but the kid's only there to ask to sign over the title to the old house.  The ex has an offer on it, and wants to sell.  Quick disappointment shadows her face, and she just as quickly sucks it up.  And then she signs.  So, how is it with you? she asks her son, smiling.  You read her pain.

Why do I like this show?  Because for all its contrivances and sometimes completely silly stuff---a guy gets shot with an arrow during a Medieval archery contest?---it often has the ring of homely human truth.  The crime isn't exotic, or out of the ordinary.  It's not the arrow, but the heart.

Thanks for the recommendation, David. It sounds like my cup of tea, and the whole series is available online. I've just been catching up on Brit shows via Netflix and Hulu Plus on my new iPad: Inspector Lewis, Sherlock, Midsomer Murders, and yes, Downton Abbey. I'm dismayed to find that not everything I want to see is available, including series 4 and 5 of Inspector Lewis and the later Inspector Morses (I have the earlier ones on VHS, for what it's worth). Nor does Dalziel & Pascoe, which I've never seen, appear anywhere online that I can tell. Any suggestions on how to see any of these without getting DVDs (which I can't use on my iPad and aren't worth seeing on my ancient TV) and without paying money to Amazon? Oh, and last night I abandoned the Brits and went back to West Wing--still one of the best American shows ever.

I love this show also. Pam Ferris was a huge star in Britain before this, thanks to her role in "The Darling Buds of May", where she co-starred with David Jason, whom I love from "Only Fools and Horses", another impenetrable slang and accent British sit-com that has never made it here, but we buy all the DVDs because it is one of the funniest damn shows I've ever seen. Period. Especially the Christmas specials. (Rent them on Netflix.) Felicity Kendal has always had a nice touch of acerbic, and has been Tom Stoppard's muse for decades. The two do have great chemistry, which is half of what makes a mystery show work for me.

Elizabeth: I personally buy DVD's because I like having a library (and I've got a good-sized LCD), but I think Hulu has the widest and oddest selection for streaming. Why no D&Z, why not THE BILL or THE SWEENEY? Who knows? And it looks as if Amazon has the exclusive window on Morse and Lewis, both, probably because of copyright, e.g., PBS/Masterpiece owns U.S. broadcast licensing. LOVEJOY, as I noted, is a budget-buster.

Well, David, I'm not much for Cozies either (preferring a bit more action, as it seems you do). However, I gotta admit I’m a fan of Rosemary and Thyme as well. Go figure!

Thanks for the recommendation. I recently downloaded the series from Netflix but hadn't decided when to watch. Your post helped me to decide to start watching it tonight.

Dix, isn't that the oddest thing? A couple of beat-up ground-pounders going all ga-ga for some chick crap? Turn in your badge, viejo.