A story about a story in a story

'Tis a time for great joy and merry-making, at least around my house, because the April issue of Alfred Hitchcock's Mystery Magazine has arrived, bringing with it "Shanks' Ride."  This is my twentieth story in AHMM, and  the eighth published tale about Leopold Longshanks, a curmudgeonly mystery writer who occasionally finds himself reluctantly thrust into the position of crime-solver.

What makes this particular story special to me (although I love all the little darlings equally, of course) is that it belongs to a specific subgenre:  one character relates a story containing a puzzle and another character solves it.  It is the first Shanks story of that type I have gotten published, though not for lack of trying.

Here is the opening scene:

“I don’t think my alcohol level is over the legal limit,” said Leopold Longshanks.  “I could probably drive home all right.  But I figure there’s no point in taking chances.”


You can probably guess that the taxi driver is the one with the story to tell.

The earliest example of this story type of which I am aware is "The Tuesday Night Club," (1927) by Agatha Christie.  It is also the first appearance of one of literature's great detectives, Miss Jane Marple.  In this story a group of friends gather and discuss a genuine crime.  To everyone's surprise the elderly spinster solves the crime.  Christie published a series of stories about this club, published as The Thirteen Problems and The Tuesday Club Murders. 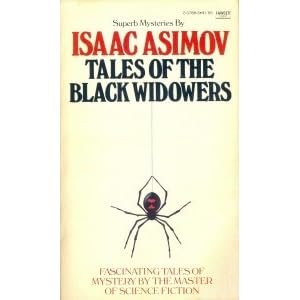 Another great example is (are?) the Black Widower stories of Isaac Asimov.  He acknowledged Christie as his inspiration for them, by  the way.  These short tales featured a group of men whose meetings were enlivened each month by a guest who, inevitably, had a puzzle in need of solving.  After all the clever and sophisticated members had picked the problem to pieces Henry, the waiter, would provide the solution.

You'll notice that both of these series are not only stories-within-stories, but examples of the least-likely-detective syndrome, since Miss Marple and Henry would appear to be the least qualified members of their groups to solve a mystery.

My friend Shanks doesn't qualify for that, of course.  He is a reluctant, but highly logical choice for detective. He is so logical, in fact, that he complains the concept is ridiculous: no one could possibly get enough information from a tale-teller to figure out whodunit.  Alas, I am cooking the books so he has no choice but to succeed.

And I think I will leave it there.  If you want to know more, you know where to find the rest of the tale.