The Great and Billowing Sea 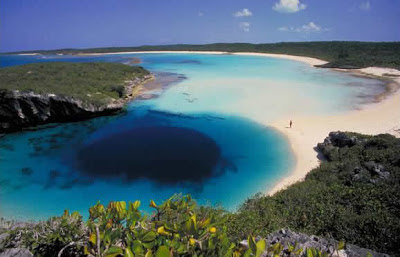 I grew up hundreds of miles from the sea, and during my early years the idea of the ocean meant very little to me.  My only trips to the beach when I was a kid consisted of two trips to Jekyll Island, Georgia when I had a cousin that lived there, and a single family vacation to Panama City, Florida.  Oh yes, I almost forgot, we got to tag along with Uncle Jack and family when he won a contest vacation to St. Augustine.  During that trip I don't even remember seeing the sea, as my cousin Nicky and me spent most of our time exploring the great and gracious Ponce de Leon Hotel.  This Spanish style resort was unlike anything we had ever been exposed to; we knew we had entered a more rarefied atmosphere when on our first visit to the dining room we had an array of forks to choose from; their mysterious arrangement appearing as a test to determined who really belonged in such a place.  I remember mom and dad appearing uncomfortable as they studied the baffling silverware.  I have no memory of how we resolved the issue, but I don't recall going away hungry.

The other visits to the sea I mentioned were not without challenge, either.  My very first time in the Atlantic my very life was in peril.  Nicky and I (I always seemed to be with Nicky when things went wrong) had waded out to our waists at low tide and were splashing merrily about, as eight-year-olds are wont to do, when he returned to land to retrieve something.  In the meantime, I lost myself in the warm water and gentle waves, feeling almost sleepy beneath a very hot sun, only remotely aware of a distant shouting.  After a few moments of this dreamy inattention, it suddenly broke through to my consciousness that this shouting was drawing closer and closer.  I also became aware of a lot of splashing.  Turning back to face the beach, I could see that everyone to my right was fleeing toward shore, and even as I stood there, amazed and uncomprehending, the people to my left began to very actively join in this stunning migration.  Then a single word separated itself from the others and floated from shore to me, somehow rising above all the din..."Shark!"

Though I had never given sharks much thought, and the book and movie version of "Jaws" was yet many years in the future, that single word managed to convey to me a keen sense of terror.  As if dreaming, I turned my head in the direction the exodus had begun, and there, not so terribly far away, a large fin sliced through the calm waters further out, following the coastline at a leisurely pace.  I could even see its tail whipping along behind it.  Then I did what every rational person does in such a situation, I began to wade as quickly as my short, little legs would carry me toward terra firma, splashing and thrashing away; neither in a position to run nor to swim.  It was then that I realized how life hangs on a moment...especially when it involves the great and billowing sea.  I made it to shore unscathed, though rather shook up.  I was told that despite all my agitation in the water, the great shark never wavered in its course, obviously uninterested in bony little boys...at least for that moment.  I used this experience in a story entitled, "Natural Causes", which appeared in Ellery Queen Mystery Magazine's November 2003 issue.

On my next visit, I was stung by a very small sting ray.  It hurt, but didn't require medical attention.  The only catastrophe of note that occurred during the Panama City visit was a sunburn that I shall never forget.  Lest you think Cousin Nicky escaped unscathed, during the St. Augustine trip, on our first trek beyond the safety of the walls of the hotel courtyard he was attacked by a dog and bitten several times.  A short time later he would make headlines by becoming stuck between two buildings and having to be removed by the fire department.  My aunt keeps a yellowed copy of the local paper covering this extraordinary event which contains a grainy black and white photo of my favorite cousin wedged into a small gap between two brick office buildings.  I was not with him, so can offer no explanation.

The second half of my life I have spent cheek-by-jowl with the Atlantic.  And though time and experience has improved my overall opinion of the sea, it has certainly not lessened my respect for its power and capriciousness.  Hurricane Sandy demonstrated that just recently.  We were largely spared the worst of it here, but to the north of us there is great devastation.  There could have been no hurricane without the cooperation of the mighty sea.

Sandy is only one of many, many storms I have lived and worked through; not to mention floods.  The sea is always at work trying to reclaim the land.  It also claims people.  Hardly a winter goes by that a clamming or scallop boat is not lost at sea off our coast.  During the balmy summer months swimmers are taken by rip-tides.

Sometimes the sea returns things: A lady once came into my police department to speak with a supervisor.  As I was the sergeant on duty, I met with her and inquired how we might be of service.  Opening her rather large hand-bag, she extracted something yellowish, placed it on the desk between us and asked, "Do I have to turn this in?"  It was the lower jaw bone of a human being and still retained most of its teeth.  Some bore fillings.  My own lower jaw may have hit the desk; I don't remember.  Being a crack investigator however, I cried, "Where the hell did you get that?"  You might guess her answer.  "I found it on the beach after a storm."  The next statement surprised me a little.  "I've been using it as a paperweight on my desk."

With little grace, she reluctantly parted with her prize.  I had obtained enough information to both identify and locate her should I need to.  Perhaps you can also guess what my first line of inquiry was?  Yes, that 's it--I quickly determined whether any significant other in this strange lady's life had gone missing.  She had a divorced husband, but he was still amongst the breathing.  The jaw appeared quite old, though this can be very deceptive after not a very long time in the ocean.  It did strike me that the fillings appeared to be made of steel, not something commonly, or at all, used in the U.S.--many foreign freighters pass our coastline, and men overboard are more common than it is comfortable to think about.  In any event, the jaw was packaged off to the state medical examiners office.  To my knowledge, a match with a missing person has never been made.  It remains a mystery of the deep.  Other things have been brought ashore by the sea, but are too grisly to discuss here.

Even so, most of us are very drawn to that same dangerous sea.  On sunny days there's nothing more pleasant than lying on the warm sands as the sea laps the shore mere yards away, and gulls wheel in a flawless sky.  It is, after all, where life began...even if it is also where it sometimes ends.

Countless mystery and suspense stories occur on, or next to, the sea.  Most of mine do.  I suspect you could name dozens of stories and novels inspired by the sea if you put your mind to it.  In fact, if the sea were to vanish tomorrow (and we were to somehow survive this catastrophic event) half the stories yet to be written would probably remain so.
Posted by David Dean at 00:01

I used to write and photograph for a New England sailing periodical, and your article is well worth remembering.

One of the magazine's cartoon showed a man with his back to the sea orating "I love the sea and the sea loves me." Meanwhile, a huge anthropomorphized ocean wave posed to swallow him.

David, I live two hours from the Atlantic Ocean and never thought about a story involving the beach or ocean, though one of my favorite Janice Law short stories takes place there. Challenge for today: Escape from the novel and begin a short story with an ocean setting. Thanks.

Nice piece. You were rather unlucky as a child, though. The worst I can remember are the August jellyfish!

Au contraire, Janice--the shark could have eaten me, or the stingray hospitalized me, but neither happened. I call that 'good' luck.

That sounds like a perfect illustration for this piece, Leigh; I wish I had found it and posted it. The sea is a beautiful and exhilirating presence, but dangerous indeed, and especially to those who don't take her seriously.

Fran, I'm so glad I provided a bit of inspiration today. Coincidently, I went to bed last night reading of Callie staring out into the night sea--maybe the very beach you would go to!

David, I love the sea, too - I grew up on the West Coast, and in my dreams the waves are California waves - big and wild (or at least they seemed so to my childhood self). Now I live in the middle of the country, and sometimes I miss it so badly I can't stand it...

David, picturesque and very well written.
I have immersed myself off the Florida Coast, the Gulf, the California Coast, both coasts of Mexico, the Caribbean, and the South China Sea, but my favorite waters are off the Maui Coast, even though somebody seems to get shark bit there about once a year. It's nice to go to sleep at night to the lullaby of the ocean lapping at the sand.

David, I’m a Desert Rat, born and raised. But the line “A desert is an ocean with its life underground, and perfect disguise above,” written by Dewey Bunnell of the group “America” really pegged the reason – I think – why I also feel so at home near the sea.

I remember the sea of both coasts. First, near Falmouth for one summer when I was a kid and my dad did some work at Woods Hole – I took sailing lessons from a salty old guy, in a 20-something-foot boat that I loved. Later, for a year-and-a-half, I lived in Monterey, CA, on the hill directly above Steinbeck’s Cannery Row, while I studied Arabic and the fog rolled in like clockwork each afternoon. Still later, on an A-Team in Panama, we ran along just off a coral-filled coastline in 2-man Klepper sea kayaks. Then, when I was stationed at Ft. Bragg, we ran boat ops several times in the Inter-Coastal Waterway off the Carolinas, and out in the ocean on the far side -- the Zodiac engine screaming as the small rubber boat pushed its load of soldiers and gear up towering waves’ steep sides going out. The booming surf rolling in against the beach as we swam in on the return at night.

Incidentally, I had no idea, but evidently the band America was formed in Great Brittain by sons of US servicemen who were stationed there. Found this fact when I Googled it just now. Rather a fitting thing to discover on a day so near to Veteran’s Day, I thought.

Thanks for reminding me about the call of the sea,
Dixon