The theme of my mystery series is recovery from alcoholism, other addictions, and codependency—a lot harder sell than, say, man against nature or puppies and kittens. Over the years, I’ve been asked to participate in panels with other authors whose crime fiction tackles various social issues, from the environment to human rights violations to animal rights. 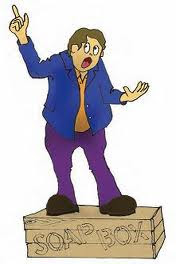 (I also had the memorable experience of being assigned to “the booze panel” at Bouchercon, but that’s another story. Suffice it to say I declined to do it a second time.) The one point on which all such authors agree is that it’s crucial to avoid any taint of preachiness while getting their point across. Storytelling trumps theme or issue—always.

Authors sneak their point of view into their mysteries in a variety of ways. The most popular way to avoid preachiness is revision. Put all the pet peeves, hobby horses, and heavy-handed passages that come to mind into the uninhibited first draft, by all means—and then delete them.

As I’ve become a more experienced writer, I’ve become more willing to slash, slash, slash. Ever since a powerful workshop a number of years ago, I’ve found the offending passages leap out at me when I reread the first draft. And when I review each revision, even more cuttable preaching pops up. Most recently, I’ve realized there is more to why these passages must go than simply to avoid irritating the reader. Preachiness is the enemy of pace. My biggest temptation is to overexplain the recovery process and try to demystify the twelve-step programs. When my protagonist Bruce muses about AA, it stops the action. I have to find ways to make the AA principles serve the action, build character, and advance the story.

My point of view is that alcoholism is a disease and recovery is transformative. But Bruce would be unbearable if he constantly plugged that point of view. Instead, I’ve given him a sardonic ambivalence that is much more palatable to the reader. Bruce’s mixed feelings about recovery create internal conflict, one of the key elements in building a fictional character, while they also get the point across. A T-shirt expressing Bruce’s attitude toward recovery might say: “Gimme a break!” He is constantly rolling his eyes over some AA platitude—and then experiencing its inner truth.

My sidekick character Barbara carries another theme that is important to me, that of codependency. Barbara is addicted to rescue and control and to minding everybody’s business out of an excessive desire to help. Barbara is a helping professional as well as an Al-Anon member. She understands that becoming overinvolved with or even giving advice to others is a way of distracting herself from her responsibility to manage her own life. She knows that fretting over what other people think undermines her self-esteem, that she can’t “fix” anybody but herself, and that she can’t blame others for her feelings or choices. If Barbara had all the virtues she’s striving toward, she’d be insufferable. So I’ve made her a chronic backslider. She is constantly being derailed by nosiness, embarrassment, and a desire to run the lives of others. Her T-shirt would say: “Oops!”

One way for the author to gain some distance from the character who represents an issue is to put that character in third person rather than first. That’s what happened with Barbara. In the early drafts of my first book, she was a co-protagonist who alternated first person chapters with Bruce. Bruce’s voice is sardonic and clever, with a lot of feeling underneath. He’s a New York smartass with a heart of gold. The original Barbara was self-conscious and digressive and, yes, preachy, no matter how much I revised the manuscript. The result was alienating to readers. Demoting her to third-person sidekick made her much more palatable and more successful as a character. Reader reactions to Barbara vary: some find her endearing, some hilarious, some inspiring, and some annoying. But they don’t forget her, and I think they come away knowing more about codependency and why codependents need recovery.

I’ve learned a few additional techniques for avoiding preachiness from authors with whom I’ve discussed this challenge. “Show, don’t tell” serves not only the roundedness of characters but also the integration of serious themes. It also helps not to make the the Cause and the Opposition too absolute. Readers may come to the story with a variety of experiences and points of view, and we don’t want to alienate everybody but the True Believer who doesn’t need convincing. The same goes for heroes and villains. It’s good technique to present flawed good guys and let the reader empathize a bit with bad guys. Maybe what saves the character-driven mystery from turning into a sermon is simply: Nobody’s perfect!
Posted by Elizabeth Zelvin at 00:01