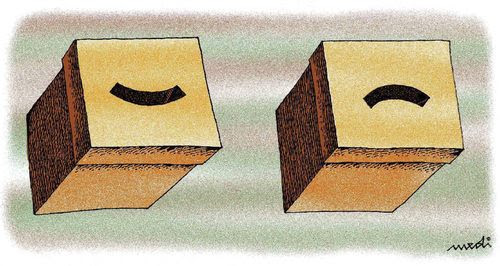 What can make you long for an otherwise insufferable commercial hawking ginsu knives?  (But wait – call in the next ten minutes and we will double your order!  Operators are standing by!) The answer, at least in areas within and surrounding eight so-called “battleground states” in our fine (but now frayed) union is the political commercial.

We live in Washington, D.C., safely Democratic.  And we are close to Maryland, also safely Democratic.  But our television channels broadcast south as well, across the Potomac River to decidedly purple Virginia.  So we have been bombarded with political hawking now for months, and that seems to the captive viewer like years.

Commercials grant politicians the license to be a bit freer with the truth than they are in person.  (“Freer with the truth” being a euphemism for “lying.”)  Actual in-person accusations of lying are rather infrequent now-a-days.  But this was not always the case.  Theodore Roosevelt once roared at a presidential opponent that he was “atrociously and wickedly lying.”  And good old Abraham Lincoln had this to say about Stephen Douglas during the famous Lincoln-Douglas debates:  “I don’t know what to call you except you are a liar.”

According to those keeping tabs on such things the current candidates to lead the country for the next four years have largely eschewed the use of the “L” word.  Instead of accusing each other of lies here is what we have instead by proxy (as collected in The Washington Post, October 24, 2012 at page A19):

Mitt Romney:
President Obama:
But the simple fact is, if you credibly don’t want to be called a liar the easiest approach is this:  Don’t lie.  The problem with the approach is, that like many simple solutions it doesn’t work.  Bending the truth has a long history of getting candidates elected in the United States.  But for one of the best solutions that honors telling only the truth while still maintaining the capacity to sway the unsuspecting electorate one can look back to 1950 and the fabled Florida senatorial race between Claude Pepper, a liberal New Dealer previously swept into the Senate for what turned out to be only one term, and George Smathers, who took Pepper’s seat and served as Florida’s senator through 1969.

Smather’s challenge, in attempting to unseat his fellow Democrat Pepper, (back then in Florida the Democratic primary was the election) was to sway the upstate (for want of a better phrase “educationally challenged”) Florida populace.  Recorded speeches were a rarity in 1950, particularly stump speeches, and what Smathers said and what he did not say in his Florida panhandle campaign addresses has been roundly debated for years.  But according to many reports his stump speech included a clever use of paronomasia, a form of word play that utilizes words that suggests two or more meanings and then relies upon the resulting confusion for rhetorical and persuasive effect.  In any event, here is what Time Magazine in its April 17, 1950 edition had to say about some of the things Smather’s north-Florida stump speech may or may not have contained:


Smathers was capable of going to any length in campaigning, but he indignantly denied that he had gone as far as a story printed in northern newspapers. The story wouldn't die, nonetheless, and it deserved not to. According to the yarn, Smathers had a little speech for cracker voters, who were presumed not to know what the words meant except that they must be something bad. The speech went like this: "Are you aware that Claude Pepper is known all over Washington as a shameless extrovert? Not only that, but this man is reliably reported to practice nepotism with his sister-in-law, and he has a sister who was once a thespian in wicked New York. Worst of all, it is an established fact that Mr. Pepper before his marriage habitually practiced celibacy."

It was also reported that Smathers bellowed to the crowds that in order to attend college Mr. Pepper was forced to matriculate.

True or not, the story became one of which legends are made.  So much so that 20 years later Bill Garvin in issue 139 of Mad Magazine, December, 1970, offered up the following wonderful example of how to nail your opponent without stooping to lying:

My fellow citizens, it is an honor and a pleasure to be here today.  My opponent has openly admitted he feels an affinity toward your city, but I happen to like this area. It might be a salubrious place to him, but to me it is one of the nation's most delightful garden spots.

When I embarked upon this political campaign, I hoped that it could be conducted on a high level and that my opponent would be willing to stick to the issues. Unfortunately, he has decided to be tractable instead -- to indulge in unequivocal language, to eschew the use of outright lies in his speeches, and even to make repeated veracious statements about me.

At first I tried to ignore these scrupulous, unvarnished fidelities. Now I will do so no longer. If my opponent wants a fight, he's going to get one!

It might be instructive to start with his background. My friends, have you ever accidentally dislodged a rock on the ground and seen what was underneath? Well, exploring my opponent's background is dissimilar. All the slime and filth and corruption you can possibly imagine, even in your wildest dreams, are glaringly nonexistent in this man's life. And even in his childhood!

Let us take a very quick look at that childhood: It is a known fact that, on a number of occasions, he emulated older boys at a certain playground. It is also known that his parents not only permitted him to masticate in their presence, but even urged him to do so. Most explicable of all, this man who poses as a paragon of virtue exacerbated his own sister when they were both teenagers!

I ask you, my fellow Americans: is this the kind of person we want in public office to set an example for our youth?

Of course, it's not surprising that he should have such a typically pristine background -- no, not when you consider the other members of his family:

His female relatives put on a constant pose of purity and innocence, and claim they are inscrutable, yet every one of them has taken part in hortatory activities.

The men in the family are likewise completely amenable to moral suasion.

My opponent's uncle was a flagrant heterosexual.

His sister, who has always been obsessed by sects, once worked as a proselyte outside a church.

His father was secretly chagrined at least a dozen times by matters of a pecuniary nature.

His youngest brother wrote an essay extolling the virtues of being a homo sapien.

His great-aunt expired from a degenerative disease.

His nephew subscribes to a phonographic magazine.

His wife was a thespian before their marriage and even performed the act in front of paying customers.

And his own mother had to resign from a women's organization in her later years because she was an admitted sexagenarian.

Now what shall we say about the man himself?

I can tell you in solemn truth that he is the very antithesis of political radicalism, economic irresponsibility and personal depravity. His own record proves that he has frequently discountenanced treasonable, un-American philosophies and has perpetrated many overt acts as well.

He perambulated his infant on the street.

He practiced nepotism with his uncle and first cousin.

He attempted to interest a 13-year-old girl in philately.

He participated in a seance at a private residence where, among other odd goings-on, there was incense.

He has declared himself in favor of more homogeneity on college campuses.

He has advocated social intercourse in mixed company - and has taken part in such gatherings himself.

He has been deliberately averse to crime in our city streets.

He has urged our Protestant and Jewish citizens to develop more catholic tastes.

Last summer he committed a piscatorial act on a boat that was flying the U.S. flag.

Finally, at a time when we must be on our guard against all foreign isms, he has cooly announced his belief in altruism - and his fervent hope that some day this entire nation will be altruistic!

I beg you, my friends, to oppose this man whose life and work and ideas are so openly and avowedly compatible with our American way of life. A vote for him would be a vote for the perpetuation of everything we hold dear.

The facts are clear; the record speaks for itself. Do your duty.

Well, enough of this.  Be sure you vote today.  Unless you are voting for that other guy.  In which case,  stay home.
Posted by Dale Andrews at 00:00

Rush Limbaugh must have been so extremely proud of one of his monologues, he kept it on his web site for months, something about Hillary Clinton and a so-called fake soldier, I think. A friend was outraged by the diatribe but I said wait, that's not what he said. We looked it up and mapped it out sentence by sentence, word for word.

Limbaugh's triage was a masterpiece of misdirection because it seemed to say one thing to Republicans, something else to Democrats, but in fact what he really said was quite different. That's an amazing superpower.

Amusing and a wonderful argument for building one's vocabulary.

Ah, the power of a well-honed vocabulary.

Meanwhile, the robo-calls don't stop, even in here in South Dakota, which everyone knows is a Red State and not worth blowing a million bucks on. But they are. What a waste of money, and time!

I got invited to an election results party tonight, but turned it down in favor of staying home with a stack of Marx Brothers movies.

Eve, I envy you. Harpo was and is my favorite, and he never said a word. Politicians could learn a lot from him.