The Washed and the Unwashed Literary fiction, genre fiction.  What are the differences?

I realize we've already made trips to this well many times, but I think it's a fascinating topic.  Talking about fiction and what makes it good or interesting is always fascinating, to me.  As for the importance of the literary/genre issue, I'm honestly not sure how useful the whole argument is, except maybe to those of us who try to write for publication.  Anyone who hopes to regularly sell short fiction to magazines or novels to book publishers should have a fair understanding of the difference between literary and genre, because--after all--most markets' guidelines include phrases like "no genre submissions" or "literary fiction only" or "genre stories welcome."  In order to get past the gatekeeper, we need to be able to accurately categorize our work.  Or at least know how editors/agents/publishers might categorize it.

"Okay, then," says the beginning writer, or the hopelessly bored dinner companion, "what IS the difference between literary and genre?" 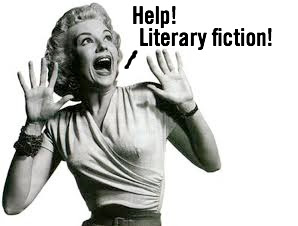 Food for thought, or guilty pleasure?

Some have said literary fiction is an Oprah's Book Club pick and genre fiction is a "beach read."  (It's hard to argue with that.)  Others say lit fic is what you find in The New Yorker and gen fic is what you find in EQMM, Asimov's, etc.  (Can you spell cop-out?)  I once read someplace that literary stories are good for you and genre stories just taste good.  (I like that one.)  My wife says literary stories are what she watches on TV and genre shows are what I watch.  (As usual, she's right.)  The clearest definition I've heard, although it's wrong, is that genre fiction is mystery, Western, sci-fi, romance, and horror, and that lit fic is everything else.

I've even heard some rude folks say that literary fiction is for those who want to be challenged mentally, and that genre fiction should be read only by the mentally challenged.  Others, just as rude and not to be outdone, say that reading too much lit fic can make you mentally challenged.

In my short-story classes, I tell students that so-called literary works deal mainly with relationships, emotions, and "the meaning of life," while genre works deal mostly with action, excitement, and adventure.  An extreme example of a literary story might be Hemingway's "Big Two-Hearted River."  It's a short piece about a guy who hikes into a pine forest, pitches a tent beside a river, spends the night, and fishes for trout, and that's it.  There's no plot, no conflict, nothing except one character doing a lot of thinking and (hopefully) making the reader think as well, about implied but never-mentioned subjects like war and rehabilitation.  I think the opposite extreme, the ultimate genre story, is a tale someone told me in high school called "The Hook."  You've all heard it: (1) a teenaged boy and girl go out parking despite warnings that a deranged killer with a prosthetic hook is on the loose, (2) they think they hear someone sneaking around outside their car while they're necking, (3) they bug out for the dugout, screaming and spraying gravel, (4) they later decide they overreacted and probably really didn't hear anything, and (5) when they get to the girl's house and the boy walks around the car to open her door for her, there's a hook hanging from the passenger-side door handle.  No deep meanings there, no profound messages, no disillusioned or dying or suicidal characters.  The whole story is plot--a twist-ending plot designed to scare the hell out of you--and the characters are there only to carry out the storyline.  And it works.

Sometimes the difference between literary and genre is obvious: The Grapes of Wrath on one end of the field, let's say, and a Rambo movie on the other.  But sometimes, as is true of most things in this life, the lines can get a little blurry.

James Lee Burke's mystery novel Cimarron Rose is considered by some to be both genre fiction and literary, mainly because of his use of elegant, descriptive language; the crime novels Mystic River and The Silence of the Lambs combine the categories because of the strength and depth of their characters; and classics like To Kill a Mockingbird and Shane are a mix of lit and genre mostly because of the life lessons that they teach.  Scout Finch and Bobby Starrett both undergo extreme changes in the way they look at life and their fellow man, and many consider this process of "becoming a different person during the course of the story" to be the single most important gauge of whether a piece of fiction belongs on the literary side of the courtroom.

Lucky with critics, unlucky at love

One thing you can count on: the critics will like you if you succeed at writing lit fic, and the public will adore you if you succeed at writing gen fic.  There's a reason that genre fiction is also called "commercial" fiction and "popular" fiction: it sells.  Stephen King once said, and I'm paraphrasing, that if you specialize in writing literary fiction there's a good chance you might find yourself sitting down with your family one night to an Alpo-and-noodles casserole.

Does that mean that all of us who actually want to earn something (rather than just learn something) should try to write only genre fiction?  Of course not.  I think you must write the kind of stories and novels that you most enjoy reading, and feel comfortable writing.  If you try to do otherwise . . . well, you'll probably fail.

It's sometimes not even safe to try to write in more than one genre.  Some can do it effectively (Nora Roberts/J.D. Robb with her romances and mysteries, Loren Estleman with his mysteries and Westerns, etc.), but it's not easy.  I don't know either of those authors, but I would bet my iPad that both of them enjoy reading the two genres they've chosen to write in.  And my hat's really off to those who can successfully write both literary novels and genre novels.  There are many, but Larry McMurtry and Ed McBain/Evan Hunter come first to (my) mind.

The oft-stated view that literary fiction is character-driven and genre fiction is plot-driven is correct, I think, but it's an oversimplification. To be successful, both categories need engaging plots and interesting characters.  But I do agree that in lit fic the characters are probably more important than whatever it is they're doing, and in gen fic what they're doing is more important than who they are.  I love to quote Stephen King, and I often find myself thinking about his observation of lit vs. genre.  "Literary fiction," King once said in an interview, "is about extraordinary people doing ordinary things.  Genre fiction is about ordinary people doing extraordinary things."

Here's another quote that I wrote down in a notebook long ago--I think it's attributed to Bill Stephens: "The characters in literary fiction spend so much time thinking, they never get around to doing anything.  They constantly are confronted with deep issues of: Who am I?  Why am I here?  What should I do?  Where am I going?  Why can I not love/be loved? . . . and a myriad of other 'Woe is me' considerations.  There just is no time left to do much."

Alas, there is also no time left to do much in this column.  Let me say, however, that I am primarily a genre reader and a genre writer.  I admit it.  I do occasionally read and enjoy literary works, I appreciate the effort and talent that it took to write them (I've actually sold some stories to literary journals--even a blind hog can root up an acorn now and then), and I understand that many folks prefer to always read and write that kind of fiction.  As Seinfeld would say, "There's nothing wrong with that."

But, God help me, I usually prefer to wallow among the unwashed.  I simply LOVE stories like Die Hard, Jaws, Psycho, and The Big Lebowski.  And I love the goosebumps I get when I think of "The Hook."

I still remember the childlike excitement I felt a couple years ago when I heard about an upcoming movie called Cowboys and Aliens, featuring Daniel Craig and Harrison Ford.  Good grief, I thought--James Bond and Indiana Jones, teaming up to fight it out with E.T.'s evil cousins?  How could that not be fun?